Saturday Football Tips: Cash Cow Eriksen to be milked in the shots market 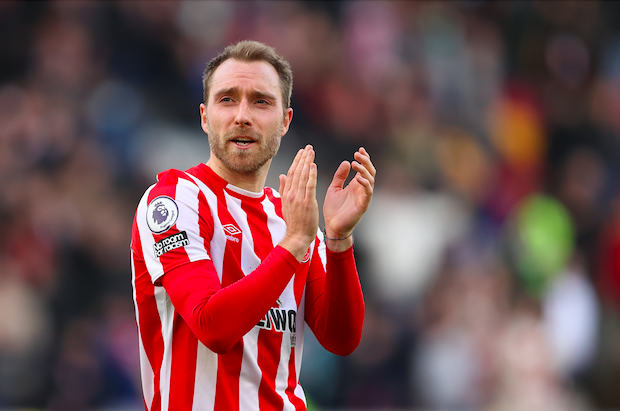 There’s a full slate of Premier League football this weekend with six of the ten matches taking place on Saturday. We’ll have full previews for all of those matches here on BettingOdds.com, but we’ve also asked @AnthonyEadson to provide us with his best Bet Builder tips for the day's proceedings.

It’s worth noting that there is no early kick-off in the top-flight on Saturday, with Liverpool against Spurs taking place at 7:45pm as well as Brighton vs Manchester United at 5:30pm. Two selections have caught our tipster’s eye on Saturday with the double currently being offered at just north of 6/5 with bet365.

I’ve recommended selections from the shot markets involving Christian Eriksen on numerous occasions over the last month and I’m taking the same approach here on Saturday. The Dane has been somewhat of a cash cow to punters in recent weeks and up until Monday’s defeat against Manchester United, the Bees had been unbeaten in matches where he had started.

However, his data in front of goal makes for positive reading for shots backers. Eriksen has recorded at least two shots in his last six appearances for Brentford and has let off at least three in his last three matches.

This line of over 1.5 shots has been cleared by Eriksen against Manchester United, Chelsea, Spurs, Burnley, West Ham and Watford in his last six outings and I’ve every confidence that he can do so again against a Southampton side who have won just one of their last nine Premier League matches.

Shots on target backers will also be intrigued by the 10/11 available for him to have at least one between the sticks in the capital, with that selection also landing in Eriksen’s last six. I’ll be taking the safer route here and will be playing the Over 1.5 shots at 4/6.

The second half of this double comes in the form of Burnley’s Dwight McNeill to have Over 0.5 shots in Burnley’s home game against Aston Villa, which just like Brentford vs Southampton, also kicks off at 3pm.

No player has recorded more shots in the league for Burnley this season than McNeil, who has let off 44 in total, but is yet to get on the scoresheet. In 2020/2021 the midfielder averaged 0.8 shots per 90 mins but has increased his output this term to 1.4 shots per 90 mins.

Burnley have been performing well under caretaker boss Mike Jackson and have picked up 10 points from their last four matches. I expect another strong showing against Villa with Burnley lifting the shackles since the departure of Dyche and attempting to play a slightly more expansive brand of football.

In McNeil’s last three matches he has recorded shot figures of 4,2,2, and another boost for this selection being that if Maxwel Cornet doesn’t make the starting line-up (doubtful), McNeil will be on free-kicks for the Clarets.

Betfair and Paddy Power have this double priced at just 1/3, and I feel we are getting a nice bit of value considering the recent data behind both players who feature. Best of luck to those following and please gamble responsibly.