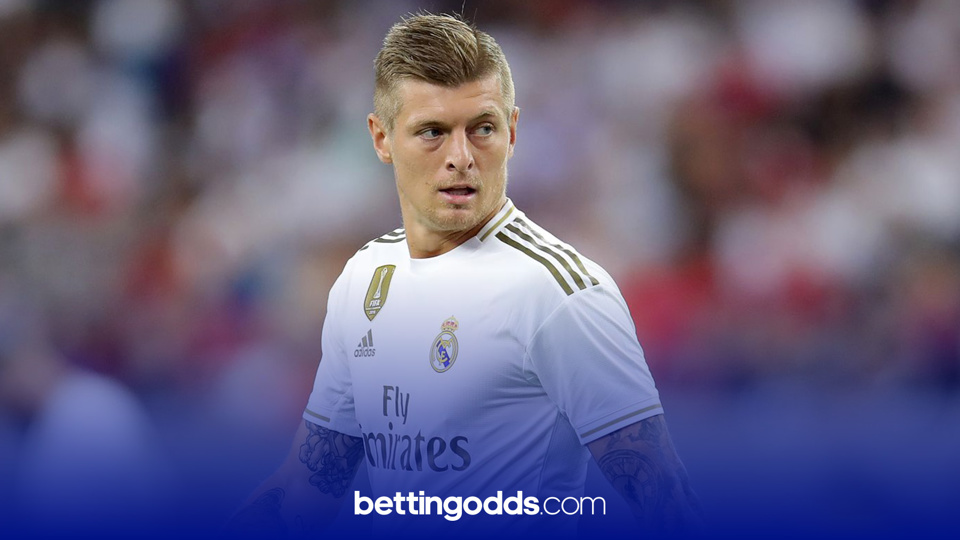 Thursday evening sees the second game since the restart for both Real Madrid and Valencia. The match can be seen at 9pm Live on LaLigaTV, which is free to all Sky customers until the end of June.

Los Blancos will be under pressure to collect all three points as they look to close the gap on Barcelona back to two points again after the league leaders claimed a 2-0 victory over Leganes on Tuesday.

After a 1-1 home draw with Levante just under a week ago, Valencia now sit eighth in the league and PaddyPower make them 5/4 for a Top 6 finish this season.

Having a look at the match odds bookmakers PaddyPower have a win for Real Madrid priced at 1/3, an implied percentage probability of 75%. The draw is priced at around 4/1 with most bookmakers, whilst Betfair have gone a top price of 17/2 for Valencia to take all three points in what would be a huge win away from home.

Nacho, Jovic and Lukas Vazquez are still a doubt for Real but with the number of options available for Zidane this should be no issue. Argentinian Ezequiel Garay will miss out for Valencia but one key return could be of Geoffrey Kondogbia who is available after serving a one match suspension.

Thursday's La Liga Tip #1
Sergio Ramos to have 1 or more shots on target Real Madrid v Valencia
1.75/1
Ramos scored at the weekend, his sixth in La Liga this season. He's averaging 1.3 shots per game this season
Odds correct as of 2020-06-17 17:00 Odds subject to change.

Our first selection is one that was tipped up in our match preview for Real’s first game against Eibar, and it landed in the first half! That of course was Sergio Ramos to have one or more shots on target in the game and we fancy it to be a winner once again with Valencia being the opponent.

At the weekend Betfair boosted Ramos to have a shot on target from 6/5 to 7/4 and those trusty traders have gone one better this time giving us a boost from 7/5 to 7/4!

It’s common knowledge that Ramos is no stranger to the opposition penalty area and has already scored six times in the league this season, taking his La Liga career tally to an incredible 65.

Delving into the data, we can see that the 34-year-old defender is averaging 1.2 shots on goal per 90 minutes.

With Ramos there is always a sense of uncertainty, whether it be through a moment of madness or marvellousness he seems to always be at the centre of everything, so let’s hope he can find the target and bag us our second winner in a matter of days.

14:11 PM - 16th Jun 20
174
2151
Thursday's La Liga Tip #2
Toni Kroos 2 or more shots on target and Casemiro to be booked Real Madrid v Valencia
20/1
Kroos has been more prominent in front of goal this season scoring four compared to zero the season prior. Casemiro has been booked more than any other Madrid player this season with 10
Odds correct as of 2020-06-17 17:00 Odds subject to change.

Our second selection for the match involves two players from Real Madrid and comes in at 20/1. Toni Kroos found the net for Real against Eibar at the weekend for only the fourth time in the league this season, but when you compare that to the season prior where he did not manage a solitary goal, it’s clear to see that the German is now shooting a lot more for Madrid under Zidane’s guidance.

Only three players are averaging more shots per game than Kroos for Real Madrid this season with the German on taking 2.1 shots every home game! Having a look at the prices, Kroos is a massive 16/5 with Betfair to have 2 or more shots on target in the match which looks very generous. With the bookies only thinking that this has a 23% chance of happening we feel it’s a great bit of value and will make up one half of our double.

The second element of this double is central midfielder Casemiro to be booked. The Brazilian has found his way into the referee’s notebook a staggering ten times already this season and it’s no surprise to see that’s the most of anyone playing in both the Real Madrid and Valencia squad.

Casemiro was booked at the weekend against Eibar and we can see he tops the Real Madrid squad in terms of tackles per game, racking up an average of 3.2 per 90 mins. Further to this he also leads the way when it comes to fouls per game for Real this season, averaging 2.7 per game. With a boosted price of 20/1 from Betfair we are happy to double up Toni Kroos to have two or more shots with Casemiro to be booked.

Thursday's La Liga Tip #3
Benzema To Score, Ramos to be carded, Hazard and Rodrigo Moreno 1 or more shots on target Real Madrid v Valencia
28/1
Benzema is Madrid's top scorer this season with no other player reaching double figures Ramos has been booked 131 times in La Liga
Odds correct as of 2020-06-17 17:00 Odds subject to change.

Our longshot for the evening is a four-pronged punt which starts off with Karim Benzema to get on the scoresheet. Nobody else has reached double figures this season for Zidane’s side and we see Benzema getting plenty of chances in the game.

Next up we’ve got Sergio Ramos to be booked. He has picked up 131 yellow cards in his La Liga career, a quite remarkable figure which boggles the mind. Priced at 23/10 for a card the bookies have given him a 30% chance of being booked, which is a price we are willing to get involved with for this yellow card merchant.

It’s fair to say that Eden Hazard has not really found his feet yet having traded London for Madrid last summer. However with someone who possesses as much quality as the Belgian, we feel it’s only a matter of time until he comes into form and we fancy him to have 1 or more shots on target as part of our same game multi.

The final selection that makes up our 28/1 shot is Valencia’s Rodrigo Moreno to have one shot on target which is priced at 6/4 as a single. The forward let rip with four shots on goal against Levante last time out and he averages more shots per game than any other Valencia player. We”ll be hoping that we can land another winner on a Real Madrid game after Saturday's 15/8 winner. Enjoy the game and please remember to gamble responsibly.