RB Leipzig v PSG Tips: Back Di Maria to rack up the shots against Leipzig 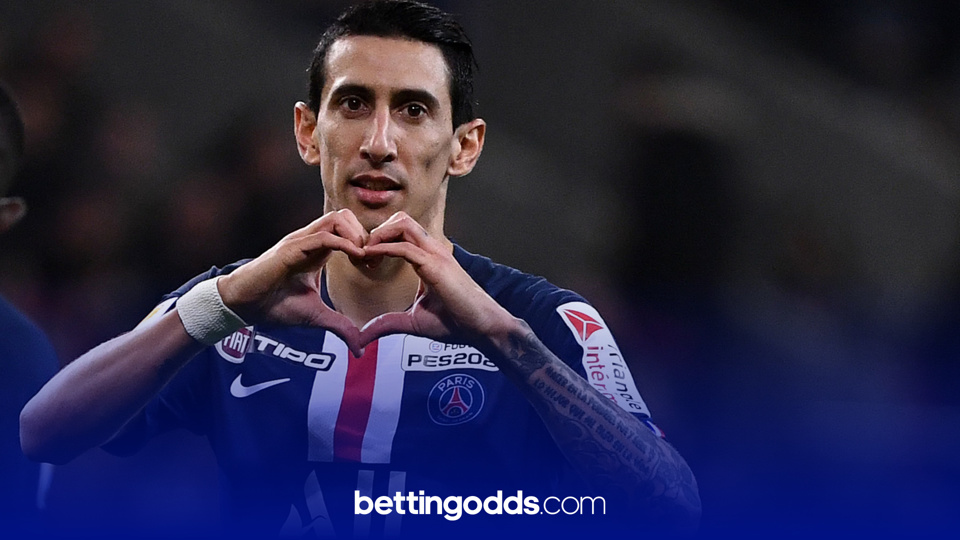 Both RB Leipzig and Paris Saint-Germain left it until the dying embers to book their place in the Champions League semi-final, with the French side hitting 100/1 inplay before two quickfire goals at the death to break hearts in Bergamo.

Julian Nagelsmann’s side will be without Ibrahima Konate for the game through injury, whilst Tyler Adams, who scored the winner against Atletico will be pushing for a start. PSG have several injury concerns with Marco Veratti and Keylor Navas both major doubts for the game. Angel Di Maria should return to the starting line-up after serving a suspension in the last round.

PSG have been made the favourites with bookmaker William Hill pricing them up at 4/5 for a win inside 90 minutes. Betfair go 29/10 for a draw, whilst Unibet are currently top-priced at 7/2 for a win for the German outfit. I’ve had a dive into the betting markets and picked out three football tips that I like the look of for the game that can be seen live on BT Sport kicking off at 20:00.

Odds are currently not available for this event

For my first selection I’m backing Kylian Mbappe to score anytime at the rather generous looking price of 6/5 from Betfair. The 21-year-old was immense when coming off the bench against Atalanta in the quarter-final. In just 38 minutes on the pitch he managed three shots with two being on target as well as providing an assist for one of the goals. He should be match fit now after recovering from injury and I think he will be firing on all cylinders against Leipzig on Tuesday.

The creative influence of Neymar was ever apparent last week and with Mbappe back in the starting line up, I see the youngster getting plenty of chances. He’s scored a remarkable 30 goals in just 36 appearances this season, including five goals in four starts in this Champions League campaign. I do think that this is a really good price on offer here from Betfair, especially when you consider that he is as short as 8/11 to get on the scoresheet with bet365.

Another player who I’m expecting to come back into the starting XI is Argentinian Angel Di Maria. I’m having a small play on him to register two or more shots on target at the price of 5/1, available with both Betfair and Paddy Power. After serving a suspension in the last round against Atalanta, Di Maria should be raring to go here.

He’s enjoyed another good season with PSG, providing 12 goals and 18 assists in all competitions. He averages 2.8 shots per game and bang on one shot on target per game this campaign and quite simply I think the 5/1 available here is a touch too big. The same selection is just 2/1 on Coral so with the same bet around double the price with Betfair I’m happy to get involved.

Moving onto the longshot for this game and at 40/1 I’ve picked out both Neymar and Dani Olmo to have one or more shots on target, with both Juan Bernat and Angelino to be carded.

Despite not getting on the scoresheet against Atalanta, Neymar was exceptional in his sides victory in the quarter-final, racking up seven shots in total with two of them hitting the target. He should be on free-kicks again for the side from the capital and I’m backing him to have one on target against Leipzig tomorrow.

For the German’s I’ve gone for Dani Olmo, who looks a really good price at around even money for a shot on target. He’s been playing just behind the striker of late for Leipzig and has three goals in this season’s competition already. He managed one on target against Atletico and has scored four goals in ten starts since joining from Dinamo Zagreb.

Moving onto the cards and for PSG I’ve decided to opt for Juan Bernat to be booked. The left wing-back has been booked five times in just 17 starts this season and looking at the prices, he’s the one I want onside to pick up another here.

Rounding things off is Red Bull Leipzig’s Angelino to be carded. I think he will be in for a long night here defensively up against Angel Di Maria and Neymar who have been known to switch flanks during the game. The Manchester CIty loanee has been in good form for Nagelsmann’s side but has also been booked in two of his last four matches and I’m hoping he can pick up another one here.

Putting those elements together comes out at around 40/1 and on paper this game looks like it should provide plenty of entertainment. Good luck if you are following any of the tips and as always, please gamble responsibly.

This angle of PSG's dramatic winner is sensational 😍

The true quality Neymar's through ball to Mbappé, and the sheer elation at reaching the last four...

Champions League football is well and truly back!