RB Leipzig v Atletico Madrid tips: Simeone's side to prevail in clash of styles in Lisbon 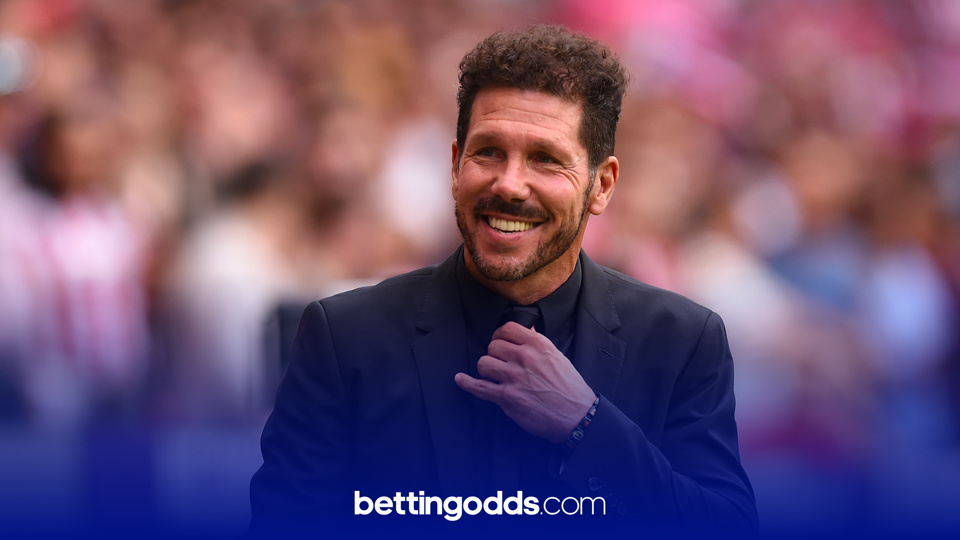 Diego Simeone's side have now reached the quarter-finals in five of the last seven seasons
By Anthony Eadson
16:44 Wednesday 12th August 2020 - 5 minute read

It’s RB Leipzig v Atletico Madrid on Thursday evening with the German’s making their first appearance at the quarter-final stage of the Champions League. For Atletico this is the fifth time in seven season’s that they have reached this stage of the competition, and with both sides having such contrasting styles of play, this should be an interesting match up.

Leipzig have enjoyed a very respectable season however they may have reason to be a little disappointed with the second half of the campaign after being top of the league at Christmas. They have now lost star striker Timo Werner to Chelsea which is sure to be a huge loss for them after he scored 35 goals in all competitions this season.

It’s not just Werner who Julian Nagelsmann may be without here as fellow attacker Yousuff Poulson recovers from a ligament injury that kept him out for the end of the Bundesliga season. The Dane is a major doubt and Nagelsmann may have to look elsewhere for goals in his side with Patrick Schick expected to come in.

For Atleti, they are without both Angel Carrea and Sime Vrsaljko who both tested positive for coronavirus at the weekend. Away from that Simeone’s side should be at full strength with Joao Felix, Alvaro Morata and Diego Costa all available to spearhead their attack.

I’ve picked out three football tips below that I like the look of, but having a look at the match prices and it’s unsurprising to see Atletico the favourites, priced at 13/10. William Hill have the draw at 2/1 with a win for Leipzig inside 90 minutes priced at 12/5.

For my first selection I’m going for Atletico to win and under 3.5 goals in the game, priced at 15/8 with several bookmakers including Paddy Power and Betway. I’ve already mentioned how Leipzig will be without Timo Werner and potentially Yousuff Poulson and to me this really is huge. Werner’s goals have been such a big part of their success over the last few seasons and without him I feel they will struggle to provide that attacking edge.

Atletico on the other hand are at full strength in attack with Joao Felix, Alvaro Morata and Diego Costa ready to perform on the big stage. It’s no secret that Altetico partake in a lot of wins ‘to nil’ and again this season they have kept 22 clean sheets in all competitions with under 2.5 goals landing in six of their last seven in the Champions League.

They knocked out Liverpool in the last round and I want them onside for the win here. Their experience and method of playing in the latter stages of this competition is a formidable opponent for Leipzig and one they have never faced before. All things considered I’m backing Simeone’s side to win with under 3.5 goals in the game.

My second pick for this game comes in the form of a little same game double of Thomas Partey to be carded and Marcel Sabitzer to have a shot on target at 13/2 with Betfair. Atletico’s Thomas Partey has been booked no less than 16 times this season and I was relatively surprised to see other members of his team at a shorter price to pick up a card. He’s had the most of any player for the side from the capital this season and I fancy him to pick up another here against Nagelsmann’s side.

The latter part of this double is Marcel Sabitzer to have a shot on target in the game. After departee Timo Werner and forward Patrik Schick, Marcel Sabitzer actually averages the most shots per game this season with 2.2. Priced at odds-against as a single here he looks good value to land one on target especially when you consider there is no Werner for RB.

40/1 is the price on the longshot I’ve picked out and it starts with Alvaro Morata to have a shot on target. Nobody at Atletico Madrid averages more shots on target per game than the former Chelsea striker this season and he should be their biggest threat in front of goal.

For Leipzig I’ve opted for Christopher Nkunku to land one between the posts. The Frenchman is averaging an impressive 0.8 shots on target per game this season and priced at around even money as a single he looks like a good value prospect to go into this multi.

Moving onto the cards and the first of those who I’m hoping finds his way into the book is Saul Niguez. He’s picked up 12 yellow cards across La Liga and the Champions League this season and again, he’s one who looks too big in the market at 10/3 with Betfair.

Rounding this one off is RB Leipzig’s Konrad Laimer to be carded. He’s been carded on seven occasions including against Spurs this season. He’s one who likes to break up play and when you put those four elements together we get the price of 40/1 from Paddy Power.

This game can be seen live on BT Sport at 8pm but as ever, only bet what you can afford and always gamble responsibly.

Which goal did you enjoy most?