Top Promoted Club Odds: Marco Silva's side are the 11/10 favourites to finished highest of the newcomers.
By Anthony Eadson
14:19 Thursday 7th July 2022 - 5 minute read
Bet £10 Get £40 in Bonuses
#AD New 18+ UK customers only. Register using the promo code WELCOME40, deposit and place first bet of £10+ on Sports (cumulative Evens+) within 7 days of registration. First bet must be on Sports. £30 in Free Bets and £10 in Free Spins (50x20p) credited within 10 hours of bet settlement. Free Bet stakes are not included in any returns. Bonuses have a 7-day expiry. Payment restrictions apply. SMS verification and/or Proof of I.D and address may be required. Full T&Cs apply.
50% Up To £50 Welcome Bonus
#AD 18+ begambleaware.org; New bettors get 50% of deposit up to £50; Once per household; Min deposit £15 (no Skrill/Neteller); Wager a total of 8 times deposit + bonus, with max qualifying bet stake equal to your initial bonus amount; Bonus expires after 60 days; Min odds of 4/5 on singles, or 2/5 per leg for acca; Some bet types excluded; See full terms.
Bet £10 & Get £50 in Free Bets
#AD Bet £10 & Get £50 in Free Bets for new customers at bet365. Min deposit requirement. Free Bets are paid as Bet Credits and are available for use upon settlement of bets to value of qualifying deposit. Min odds, bet and payment method exclusions apply. Returns exclude Bet Credits stake. Time limits and T&Cs apply.

Fulham, Bournemouth and Nottingham Forest all gained Premier League status for the season ahead after their promotion from the Championship in 2021/2022. As part of our ante-post series for the forthcoming campaign, we’ve decided to take a look at the ‘Top Promoted Club’ market which is available with several of the big UK players in the betting industry.

So let’s start with last season’s Championship winners, Fulham. The Cottagers were the stand out team in England’s second tier, amassing 90 points, scoring 106 goals, and dishing out three different 7-0 thumpings on their way to the league title. Fulham also became the first English team since Chester City in 1933 to score six or more goals in three consecutive fixtures.

Marco Silva will be fully aware that Fulham have been relegated at the first attempt in the Premier League, on each of the last two occasions they have reached the top-flight (2019, 2021), and will want to ensure that trend does not continue this time round. The bookmakers have made his side the favorites at 11/10 with bet365 to be the Top Newcomer next season, with those odds implying a 47.6% chance that they will finish higher than Bournemouth and Nottingham Forest.

Fulham have already splashed £18m on defensive midfielder Joao Palhiniha from Sporting Lisbon, with more arrivals imminent at Craven Cottage. Andreas Pereira of Manchester United is reportedly close to agreeing a deal for around £10m and when assessing the attacking options of the three promoted clubs, Fulham look to have the strongest hand.

Aleksandar Mitrovic scored a remarkable 43 goals in 44 appearances in the Championship, setting a new record for the most goals in a single campaign and has a point to prove to those who think he can’t cut it at this level. Welshman Harry Wilson provided 19 assists in the Championship last season and is another who will be looking to showcase his talents in the best league in the world, however, we feel much of Fulham’s success this season will depend on their defence. In previous Premier League campaigns this has been a real area of concern for the Cottagers, and although Tosin Adarabioyo has previous experience in this division, they need more quality in this area in our opinion.

Next in the market is Nottingham Forest, who ended a 23 year hiatus away from the Premier League by gaining promotion after beating Huddersfield Town in the play-off final. When manager Steve Cooper took over at Forest he inherited a side who were bottom of the league and lacking confidence and ideas.

The former Swansea boss then set about instilling organisation and structure to a team he wanted to be brave on the ball and confident in possession, and as a result, their fortunes started to change.

After their historic promotion back to the promised land, Steve Cooper now boasts a 60% win ratio since making the switch to the City Ground. That also includes an FA Cup run where the Reds reached the quarter-finals, ultimately losing to Liverpool, who would go on to lift the trophy. 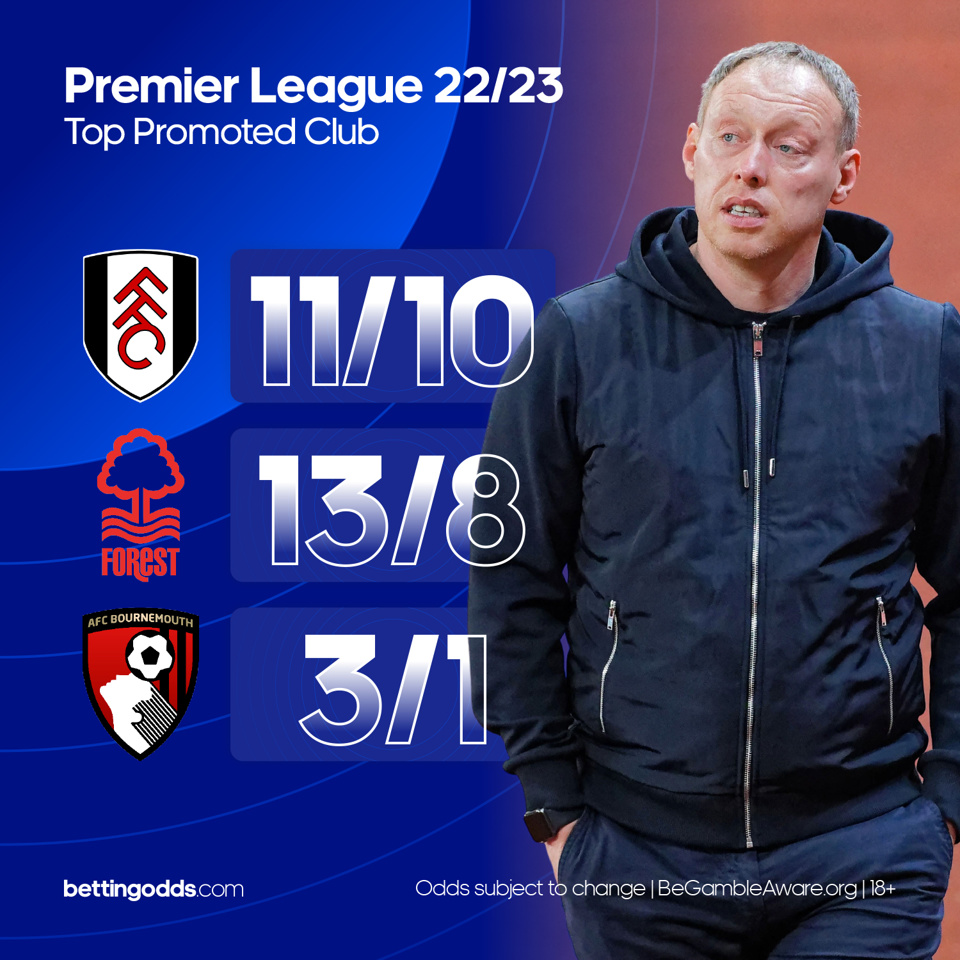 There’s no denying that Forest will need to strengthen their squad, should they wish to cope with the demands of a top-flight season up against some of Europe’s most formidable teams. In this window, they have brought in Nigerian striker Taiwo Awoniyi from Union Berlin for a club record fee of £18m. Cooper has also made two additions in the defensive area with Frenchman Guilian Biancone being drafted in from Troyes and Moussa Niakhate arriving from Mainz, both for £9m.

Play-off hero Brice Samba left an emotional tribute to the club on his social media this summer, with Dean Henderson arriving on loan from Manchester United to take his place between the sticks. A successful season for Forest will be decided upon whether they can keep their Premier League status, and they can be backed at 13/8 with bet365 for those who fancy them to finish highest of the newly promoted sides in 2022/2023.

The outsiders of the three in the betting is Bournemouth who are available at 3/1 to finish highest of the newcomers. According to the bookmaker odds, the Cherries are favorites to finish bottom of the table this season, with William Hill going just 8/13 that they will be relegated back down to the Championship.

Scott Parker’s side have been relatively quiet in the transfer market so far this window, with the only arrivals to the South Coast being Joe Rothwell from Blackburn and Ryan Fredericks from West Ham, both who arrived on a free. We can’t help but feel this squad looks a little light and needs some serious quality adding to it, should Scott Parker and Bournemouth want to stand a chance of survival this campaign.

At 3/1 we would not be considering backing them in this market, especially considering the players both Fulham and Forest have brought in. Philip Billing and Dominic Solanke are two of Bournemouth’s most talented players, but ultimately, it's hard not to envision them in the bottom three come the end of the season.