Premier League Top Half Odds 22/23: Palace can break into the top-10 under Viera

The Premier League season kicks off in just three weeks and we’re continuing our ante-post series looking at the various markets available for punters for the 2022/2023 season. Today we have focused our attention on who will finish in the top half of the table and have highlighted two selections that we like the look of.

It’s no surprise to see the so-called ‘big-six’ at incredibly short prices, with BetVictor 1/100 for Manchester City and Liverpool to finish in the top-10 spots. Chelsea and Spurs can be found at 1/25, with Manchester United and Arsenal slightly longer at 1/25 (BetVictor).

Newcastle may have finished 11th in the table last season, but bookies are expecting the Toon to improve on that in their first full season with their new owners and manager. In 2022 only Liverpool (51), Manchester City (43), and Tottenham (41), picked up more points than Newcastle (38), although at 1/3 they do look short for a top half finish, with those odds implying a 75% chance of them doing so.

Next up we have West Ham who are being offered at 8/13. The Hammers finished 7th last term, after achieving a 6th place finish in the season prior under David Moyes. The former Everton and Manchester United manager has transformed the Hammers into an excellent side, reaching the Europa League semi-finals in 2022. At the current prices we’d be more inclined to back West Ham here at 8/13, than Newcastle at 1/3.

Leicester City have finished in the top half of the table in all of the last five campaigns, most recently ending in 8th. In 2021 and 2022 Leicester finished 5th and with no European distractions this season they look strong contenders to find themselves in the top half come next May. 8/11 is on offer with BetVictor, although we’d recommend shopping around and taking the 5/6 with SpreadEx.. 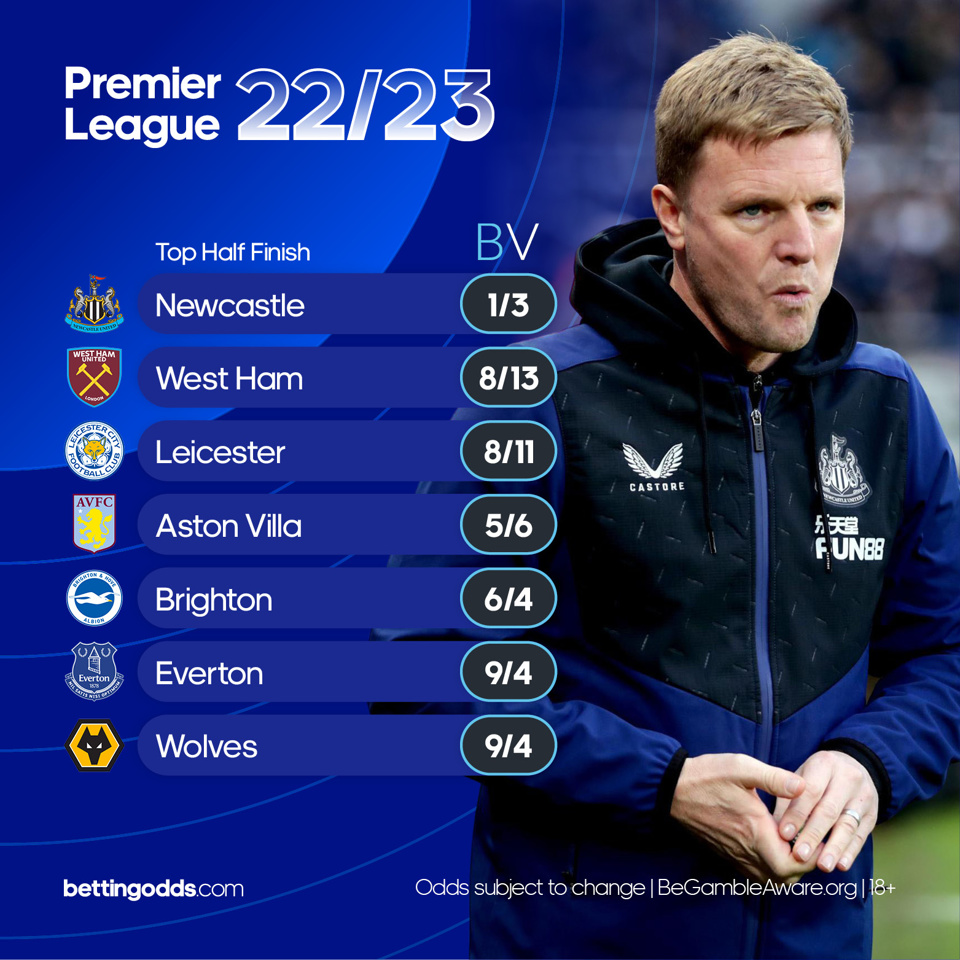 Aston Villa have signed Diego Carlos from Sevilla this summer for around £28m, and have secured the services of Philppe Coutinho on a permanent basis. Boubacar Kamara has also arrived on a free from Marseille, with the Villans odds-on to finish in the top-half at 5/6 with most firms, although that does look a little short considering they won just three of their final 11 matches last season.

Brighton’s brand of ‘Potterball’ under manager Graham Potter has long been praised by others and they achieved their highest ever Premier League finish last season in ninth. Losing Yves Bissouma in the middle of the park after his switch to Spurs is a big blow, and for those who fancy the Seagulls to repeat their success of last season, 6/4 is available.

Everton found themselves in a relegation battle that went right down to the final weeks of the season in 2021/2022 and after losing Richarlison, it would take a brave man to take the 9/4 about them finishing in the top-10 this time round. James Tarkowski has arrived from relegated Burnley to help tighten up the defence, but we think Frank Lampard has his work cut out and is just 7/1 to be the first top-flight manager to be sacked this term.

Wolves started the 2021/2022 season in good form, and found themselves sixth in the table heading into December. However, the Old Gold cantered towards the end of the campaign, failing to win any of their last seven matches. Despite this, Bruno Lage’s side managed 10th in the table and can be backed at 5/2 to do so again in the forthcoming season.

Patrick Viera was the favourite to be the first manager to be sacked in the 2021/2022 campaign, but enjoyed a strong first season with the Eagles, guiding them to 12th in the table. Palace have only finished in the top half once in Premier League history, when they did so back in 2014/2015, and are being offered at 5/2 to do so this season.

Southampton finished last season on just 40 points, with only the three relegated sides having managed fewer victories. Saints have signed Joe Aribo from Rangers and a couple of Man City academy players in Gavin Bazunu and Romeo Lavia. However, many fear for their Premier League status in the year ahead and they are 4/1 for a top half-finish, something they have not managed in the last five seasons.

Brentford enjoyed a memorable first season back in the English top-flight since 1947. The Bees managed an opening day victory over Arsenal and a emphatic 4-1 away win at Stamford Bridge on their passage to 13th in the table. The departure of Christian Eriksen will be a huge loss, but we believe Thomas Frank can keep Brentford in the division once again this time out. Although a top-10 finish does look a step too far and is available at 4/1 with most bookmakers. 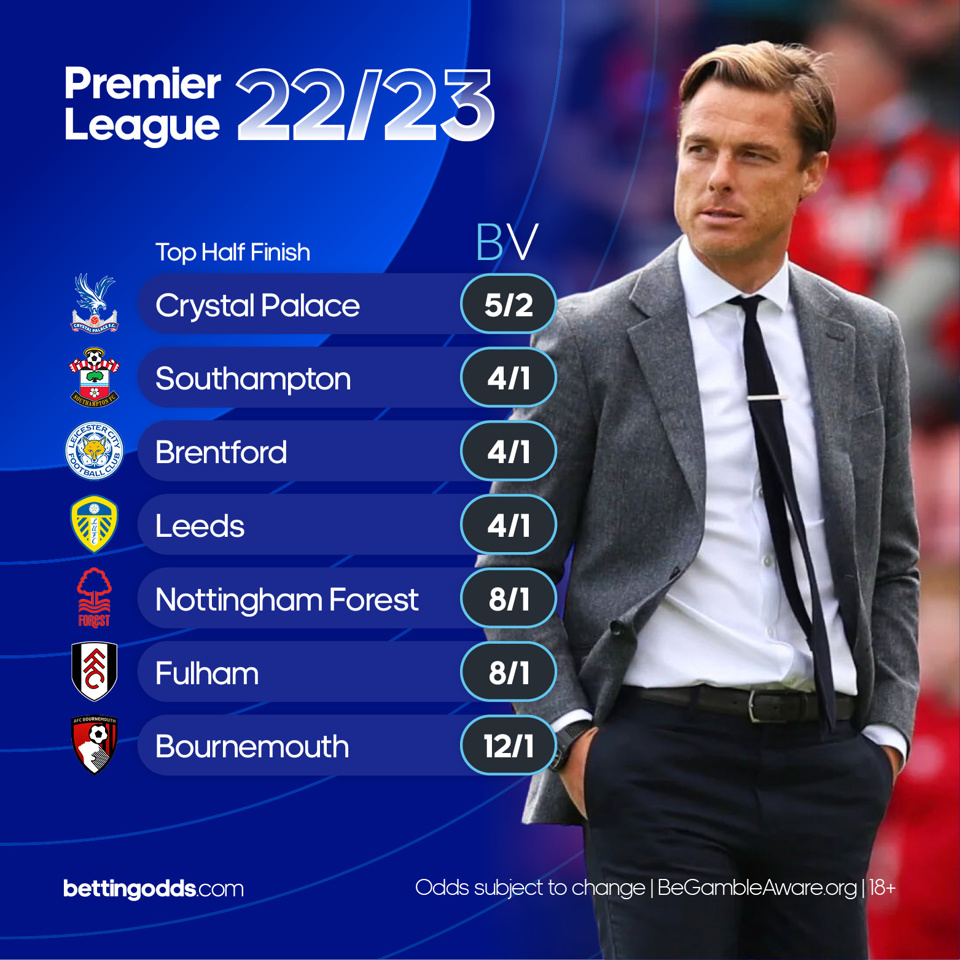 Going down to the wire was an understatement for the manner in which Leeds kept their place in the Premier League on the final day of the season with a win away at Brentford. Jesse Marsch has lost his two best players this summer in the form of Raphinha and Kalvin Phillips, and despite the arrival of Brendan Aaronsen and Tyler Adams, we fear for the West-Yorkshire club. Just like the Bees, Leeds can be backed at 4/1 for a top half finish.

Now moving onto the newly promoted teams and the most likely of the trio to finish in the top-10 come the end of the season according to the bookmakers is Fulham, who are as short as 7/1 with several firms. Nottingham Forest are slightly bigger in the market at 10/1, while Bournemouth, who are favorites to finish bottom are a best-price of 16/1 with bet365.

So after going through the runners and riders, who would we recommend to take a punt on? The first of those who catches the eye is Leicester City at 5/6 with SpreadEx. The Foxes had numerous injuries last season and had to play in the Europa Conference League for much of the second half of the campaign. Despite this they managed an eighth place finish, just six points behind Manchester United in sixth. Jamie Vardy has scored 13+ goals in his last seven Premier League seasons and with no European football this time round, Brendan Rodgers side looked primed for a top-half finish, just like they have done so in the last five renewals.

It could be argued that this is Crystal Palace’s strongest squad they have ever had in Premier League history and with Patrick Viera now having a young, exciting crop of players at his disposal, they look poised to go well this time out. The Frenchman masterminded wins over Tottenham, Arsenal, Manchester United and Manchester City in 2021/2022 and if they can keep hold of some of their most valuable assets in, Wilfried Zaha, Michael Olise and Marc Guehi, the 5/2 looks like a decent price for Palace to make the top half.