Premier League Shots on Target Odds: Bruno can hit 50+ again this season at 12/1

We are into August and the new Premier League season is less than two weeks away with Arsenal against Brentford kicking off proceedings on Friday 13 August.

Punters betting on players to have a shot on target has been growing in popularity over recent years and today we’ve decided to take a look at some prices for the coming season ahead. Paddy Power and Betfair both have odds available for certain Premier League players to register a certain number of shots on target throughout the season and we’ve taken a look and picked out a couple that we like the look of.

Harry Kane finished last season with the most goals and assists in the league as he hit the target 53 times. No player registered more shots on target than the 28-year-old and we’ve listed top-10 below. 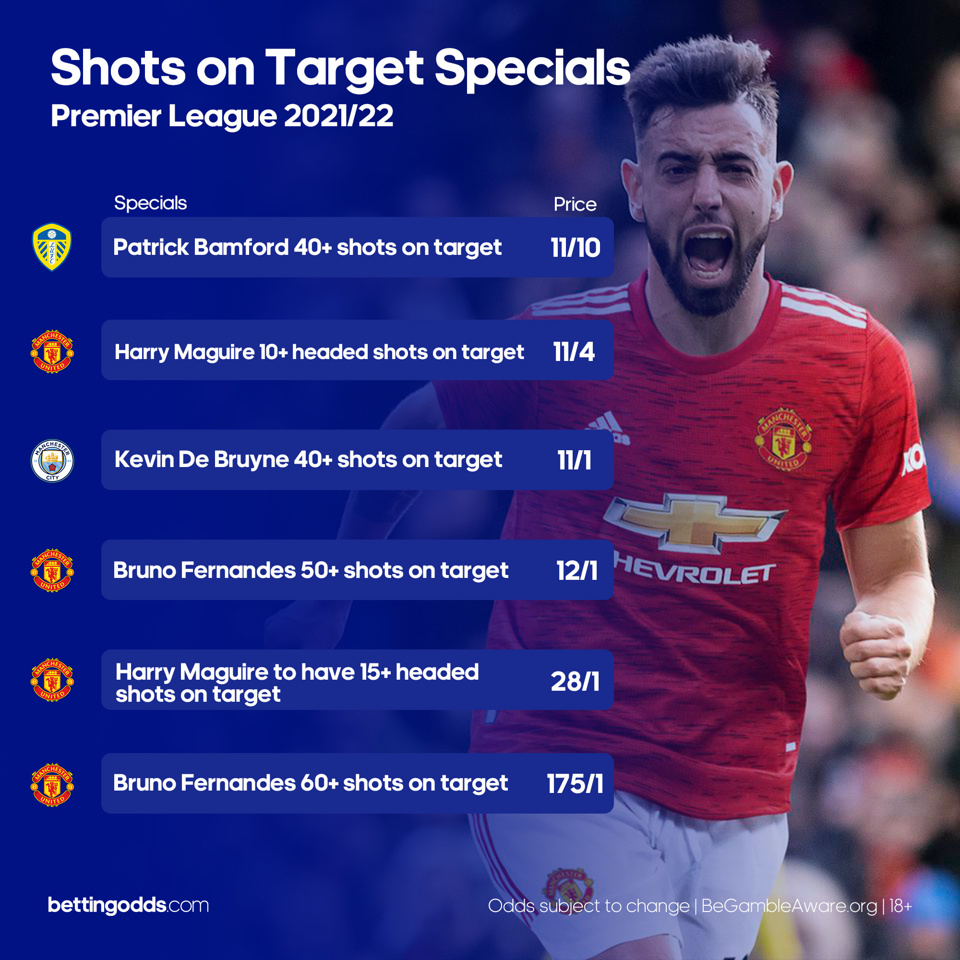 The Market - Shots on Target Specials

Punters who are familiar with the shots on target market will know that certain bookmakers offer odds on players hitting the target from outside the box or with a certain body part such as their head. Paddy Power have also included some of these in their shots on target specials with odds being offered for the following players.

View the full market and see our fancies below.

Who to back, who to avoid.

There may only be a small number of players currently priced up in this market by Paddy Power but one you should be considering is, will that selective player be featuring in every game?

As fantasy football players are familiar with, Pep Guardiola is notorious for rotating his sides and choosing Manchester City players in this market does come with an added risk in contrast to someone like Leeds United’s Patrick Bamford who appeared in all 38 league games for Bielsa’s men last term.

There’s no denying that Kevin De Bruyne is right up there with the world's best and in my opinion, on his day, there is nobody better in the Premier League. However, punters should be wary when considering these prices. In his six full seasons with Manchester City, the Belgian has never registered over 40 shots on target in a single campaign, with 39 being his highest back in 2017/2018.

Another factor to consider here is set-piece taking. Does the player in question take free-kicks or penalties that may help bolster the total number of times they hit the target this season.

One player who ticks plenty of boxes is Bruno Fernandes who has propelled Manchester United up the league since his arrival 18 months ago. In his first full season in Manchester, Bruno put in some fine performances, contributing 18 goals and 12 assists in the Premier League and is sure to be one of the first names on the team sheet this time round.

Penalty taker and free-kick taker, there’s plenty to like about Bruno when wanting to make a case for him being 12/1 to hit 50+ shots on target this coming season. This bet would have in fact landed last year with the 26-year-old registrering 51 in total over his 37 appearances.

Only Harry Kane and Mohamed Salah tested the keeper more than Fernandes last season and 12/1 does look a little big here. In his final season with Sporting CP he registered 55 in 33 appearances and with service from Jadon Sancho to look forward to there’s every reason to think that Bruno can rack up the numbers once again.

At 175/1 the Portuguese midfielder also looks worth a small play to register 60+ shots on target in the 2021/2022 season, considering he was just nine short in the previous campaign.

Bet £10 & Get £50 in Free Bets
#AD Bet £10 & Get £50 in Free Bets for new customers at bet365. Min deposit requirement. Free Bets are paid as Bet Credits and are available for use upon settlement of bets to value of qualifying deposit. Min odds, bet and payment method exclusions apply. Returns exclude Bet Credits stake. Time limits and T&Cs apply.
Football Bet £20 & Get Money Back As Cash If It Loses
#Ad. New customers only, bet up to £20 on the Exchange and if your first bet loses, we’ll refund you £20 in Cash. Bet must be placed in first 7 days of account opening. T&Cs apply. Payment restrictions apply. 18+ begambleaware.org
Bet £10 Get £30 In Free Bets + 100 Free Spins
#AD 18+ New customers only. Opt in, bet £10 at odds 2.00+ within 7 days, no cashout. Get 3x £10 Free Bets, set events at odds 2.00+. Plus 100 Free Spins on Big Bass Bonanza, no wagering. Free Bets and Spins expire in 7 days. Card payments only. T&Cs apply. Please gamble responsibly.
Bet Calculator