Premier League 22/23 Match Bets: Patrick Viera's Palace are priced at evens to finish higher than Brighton
By Anthony Eadson
16:41 Wednesday 6th July 2022 - 5 minute read
Bet £10 & Get £50 in Free Bets
#AD Bet £10 & Get £50 in Free Bets for new customers at bet365. Min deposit requirement. Free Bets are paid as Bet Credits and are available for use upon settlement of bets to value of qualifying deposit. Min odds, bet and payment method exclusions apply. Returns exclude Bet Credits stake. Time limits and T&Cs apply.
50% Up To £50 Welcome Bonus
#AD 18+ begambleaware.org; New bettors get 50% of deposit up to £50; Once per household; Min deposit £15 (no Skrill/Neteller); Wager a total of 8 times deposit + bonus, with max qualifying bet stake equal to your initial bonus amount; Bonus expires after 60 days; Min odds of 4/5 on singles, or 2/5 per leg for acca; Some bet types excluded; See full terms.
Bet £10 Get £40 in Bonuses
#AD New 18+ UK customers only. Register using the promo code WELCOME40, deposit and place first bet of £10+ on Sports (cumulative Evens+) within 7 days of registration. First bet must be on Sports. £30 in Free Bets and £10 in Free Spins (50x20p) credited within 10 hours of bet settlement. Free Bet stakes are not included in any returns. Bonuses have a 7-day expiry. Payment restrictions apply. SMS verification and/or Proof of I.D and address may be required. Full T&Cs apply.
Bet £10 Get £10 In Free Bets (APP Only)
#AD New UK, IE & Malta customers only. Min £10/€10 first deposit using Debit Card. Place a bet of £10 at min odds of 1.5. Free bets expire in 90 days. Full T&Cs apply.  18+. BeGambleAware.org, T&Cs apply.

Here at BettingOdds.com we’ve been scouring the ante-post markets for the forthcoming campaign, and today we’ve focused our attention on the Premier League and the ‘season match bets’ market.

This market is available at bet365 with punters able to bet on which team will finish highest in the table from the various matches the Stoke-based firm has priced up. We’ve created a five-fold that we like the look of and you can view all the pairings and prices below. 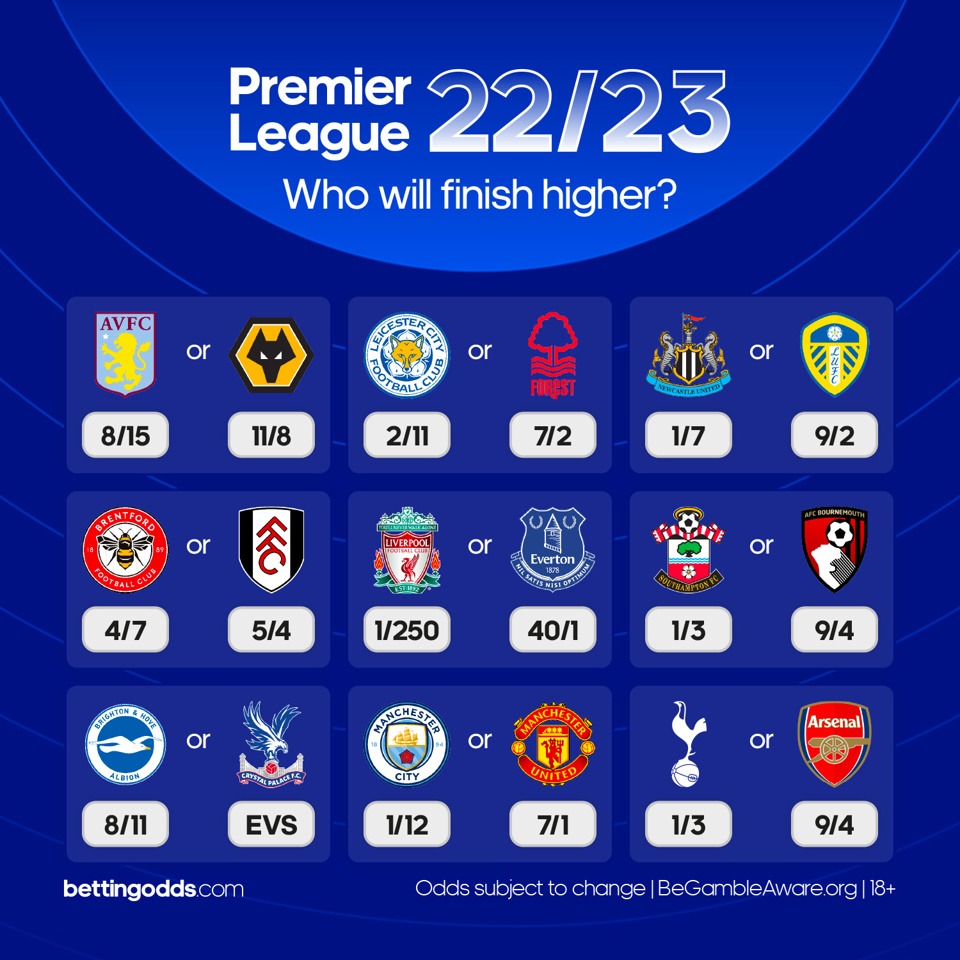 We are kicking off our five-fold from the season match bets market with Aston Villa to finish higher in the table than Wolves. After a 14th place finish for Villa last season, the bookmakers are projecting much better this time round, with firms going 8/11 for them to finish in the top half of the table. Steven Gerrard has already bolstered his squad this summer with the addition of  Brazilian defender Diego Carlos from Sevilla and Boubacar Kamara from Marseille, along with securing the services of Philppe Coutinho on a permanent basis.

Wolves were winless in their last seven matches at the back end of last season, and with Ruben Neves potentially on his way out of the club this summer, there’s a certain amount of uncertainty around Molineux at the moment. One bookmaker is offering Wolves at 3/1 for a top-half finish this season, which says a lot about how they are projected to perform this season, and with that in mind we are happy to take Villa at 8/13 to finish higher than their Midlands counterparts.

Next up we are backing Crystal Palace to finish higher than Brighton at a generous looking even money (1/1). Patrick Viera has had a huge impact since arriving at Selhurst Park, completely changing the style of football the fans have been used to in recent years. The squad is looking as strong as it ever has in the last decade with young talented players such as Marc Guehi, Eberechi Eze, Michael Olise and Tyrick Mitchell. Palace finished just three points behind Brighton last season, with a superior goal difference to their rivals down the M23.

With Yves Bissouma having departed Brighton for Spurs this summer, and potentially Marc Cucurella on his way out of the club, the Seagulls have lost some of their prized possessions. Graham Potter has worked wonders on the South Coast but his side look a little short at 8/11 in this match bet and we are happy to take Palace at the current prices. 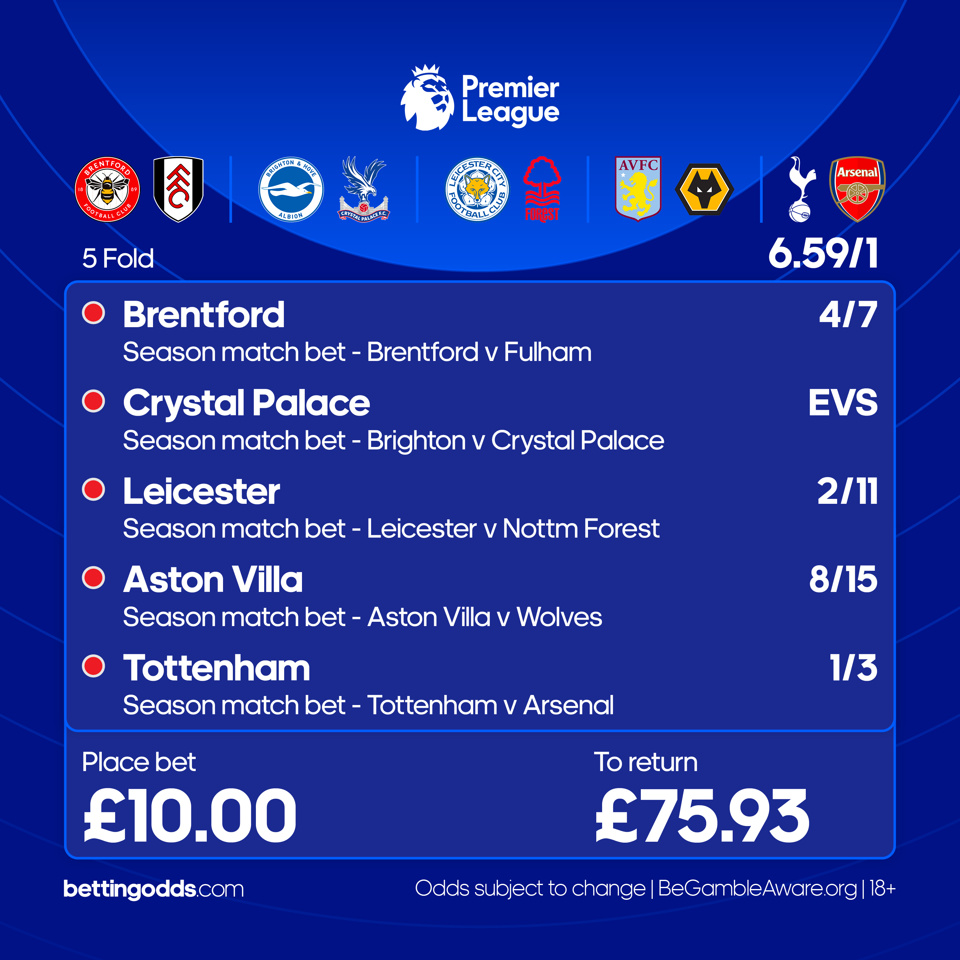 Brentford enjoyed a memorable first Premier League season in 2021/2022, with a couple of highlights being their opening day victory over Arsenal and their emphatic 4-1 away win at Stamford Bridge. Thomas Frank’s men amassed 46 points last term and will be looking to build on that this campaign, although safety will remain the number one priority. The Bees are a club who have often got things right in the recruitment department since Matthew Benham took over the club, and we do feel they need a few additions to this squad before the window closes should they wish to better last season’s points total.

Fulham have already splashed £18m on defensive midfielder Joao Palhiniha from Sporting Lisbon, with more arrivals imminent at Craven Cottage. Marco Silva will be well aware that Fulham have been relegated from the Premier League in 2019 and 2021 and will want to ensure that his side can remain in this division for more than one season at a time. Aleksandar Mitrovic scored a remarkable 43 goals in the Championship season, but it’s worth noting that his top-flight record currently stands at 24 goals in 106 appearances.

The shortest priced selection we have included in this five-fold is Leicester to City to finish higher in the standings than new boys Nottingham Forest. The Foxes have not finished outside the top-10 in the last five renewals of the Premier League with finishes of 9th, 9th, 5th, 5th, and most recently 8th in 2021/2022.

Although last term may have felt a rather underwhelming campaign in comparison to some of those during the last decade for Leicester, they still managed to finish just four points behind West Ham, as well as having to compete in the Europa Conference League, where they reached the semi-finals. With no European football to distract them in the latter stages of the season, Brendan Rodgers’ side could well be challenging for the top-six come May and we see them comfortably finishing above Steve Cooper’s Nottingham Forest.

Rounding off the quintet of picks is Tottenham to finish higher than their North London rivals Arsenal. Spurs have made some smart signings so far this summer in Yves Bissouma, Ivan Perisic and Richarlison, after adding Dejan Kulusevski and Rodrigo Bentancur last January. Antonio Conte now possesses a squad which is much more prepared to compete in numerous competitions in the forthcoming campaign.

Spurs finished last season in good form to beat Arsenal to the fourth and final Champions League spot in the Premier League, losing just one of their last seven matches. We don’t think Spurs should be quite as short as 1/3 in this market but we do fancy them to finish above the Gunners in 2022/2023.

To recap, combining these five selections pays just over 15/2 with bet365. You can access this market by visiting their site and clicking through to the Premier League outright markets.