Premier League Relegation Treble 22/23: Will all the promoted teams face the drop?

Fulham, Bournemouth and Nottingham Forest all gained Premier League status for the season ahead after their promotion from the Championship in 2021/2022. The three clubs are the three favoured teams to go straight back down but who else features? As part of our ante-post series for the forthcoming campaign, we’ve decided to take a look at the ‘Relegation Treble’ market which is available with several of the big UK players in the betting industry.

Will the three new boys go straight back down?

As mentioned earlier, the three promoted teams are heavy favourites to be sent straight back down to the Championship. At a best price of 10/1 at bet365 and a filthy 5/1 at William Hill. Well, just how common is it? We've looked back through the 30 years of the Premier League to check out exactly that.

Here are the last ten years of the Premier League:

As you can see it hasn't happened at any point over the last 10 years. In fact, you have to go back all the way to 1997/98 to find the last and ONLY time it's ever happened in Premier League history.

So something that has only happened once in a thirty year history is as short as 5/1 at the bookmakers to happen this year. No thanks...

There have been many, many occasions when two of the newly promoted teams have gone straight back down, as many as five times in the last ten years, so that certainly looks a good starting point. But which of the two are we expecting to go down? and who with them? Let's look at the options... 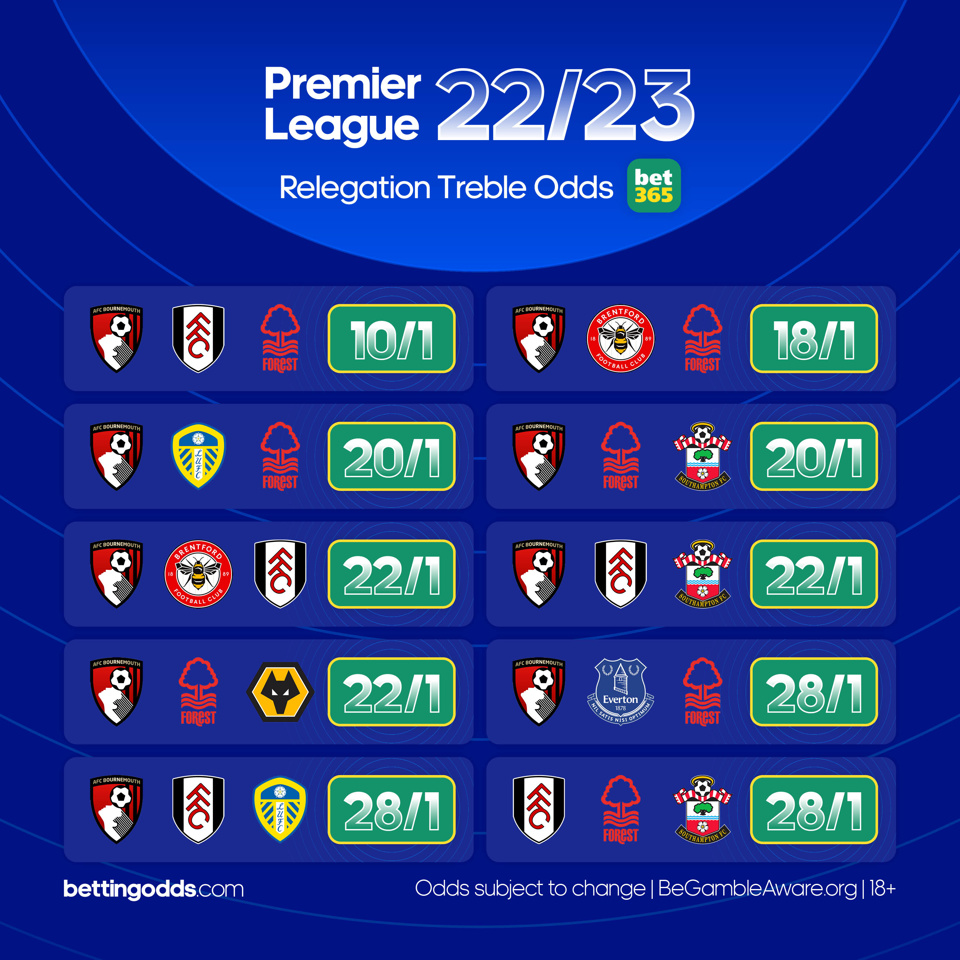 By far the favourites to go down are Bournemouth, who are best priced 4/6 for an immediate return to the 2nd tier. For that reason alone they feature heavily in most of the shortest priced relegation trebles. Scott Parker's team haven't made any significant moves in the transfer window, with only two men brought in, both on frees. I would certainly be including the Cherries in any Relegation Treble bet this season.

Forest have been extremely active in the transfer window and they aren't done yet. They've spent over £50m and brought in a top class keeper to replace Brice Samba. As the form team in the division over the last half of the Championship, they are perhaps the best equipped to stay up out of the promoted teams.

Fulham and Norwich never stay up do they? Well, Fulham have certainly got one of the strongest Championship squads to come back up into the Premier League and despite losing Carvalho to Liverpool, they have arguably strengthened again. So much will come down to how star striker Aleksandar Mitrovic translates his unbelievable goal scoring form into the Premier League. If he doesn't , they could be toast again.

After their late, late survival last season, many thought that Leeds would struggle again this season under Jessie Marsch. That was magnified when they lost their talisman Kalvin Phillips to Man City and it looks like star player Raphinha will be joining him. They have moved quickly though to replace them, bringing in players who will buy into Marsch's philosophy. Much will depend on if the new signings gel quickly and whether Leeds can avoid injuries better than last year.

Another pick for many people to go down is the Bees. They finished last season poorly and have lost the man that galvanised their season last year, Christian Eriksen. They have brought in young Scottish star striker Aaron Hickey but the squad looks weak. I'm tipping them to struggle this term.

Many people fear for Saints this year and boss Ralph Hassenhuttl is amongst the favourites to win the Premier League Sack Race, however, they appear to have done pretty savvy business , picking up a couple of Man City academy players as well as Joe Aribo from Rangers. I think Southampton may well struggle again but can't see them finishing in the bottom three.

Another team who were in deep trouble at the business end of last year was Everton. Frank Lampard seems to have bought plenty of goodwill with the fans after dragging them safe but again is one of the favourites to leave his position first. Losing Richarlison is a big loss and thus far, they've only brought in James Tarkowski from Burnley - hardly inspiring. They have cleared out a lot of dead wood though. I can see Everton struggling badly next year if they don't bring in reinforecements before the start of the season.

Last, but not least, we have Wolves who you would think would be a safe bet to stay up. However, they were in free fall towards the end of the season and only scored 38 goals last year - only beating the three relegated clubs. They haven't spent any money so far this summer so could find themselves in the bottom half and looking over their shoulders. I can't see them getting dragged into the bottom three though personally.

After looking at the above , I would personally be picking Bournemouth, then one of Forest/Fulham and possibly Brentford. With Forest, the treble pays 18/1 at bet365. With Fulham, you are looking at 22/1. Who do you fancy in your 'Relegation Treble'?