Which Premier League Referees give the most cards? 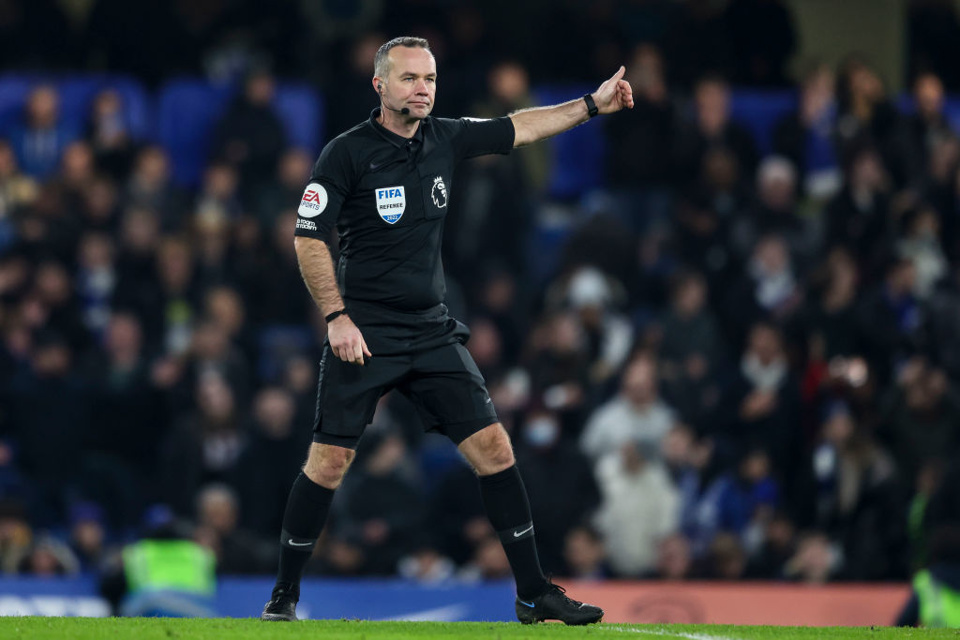 Paul Tierney has given has the highest yellow cards per game figure of any Premier League official since the start of the 2020/2021 season
By Anthony Eadson
15:59 Tuesday 12th July 2022 - 3 minute read

Betting on players to be carded is one of the most popular markets with punters across the land, particularly since the arrival of the ‘Bet Builder’. With there being variance around how many cards that different referees tend to give out during a match, it can often prove profitable to check who is on duty before placing your punts.

Today at BettingOdds.com we’ve decided to look back over the last two top-flight campaigns to check out which officials dish out the most, and least cards. At the end of 2021/2022 season it was announced that Martin Atkinson, Jon Moss and Mike Dean, would all be stepping down from their main refereeing duties in the top-flight, so we have therefore left them off the list below. We’ve also only included referees who have taken control of 10+ matches, to help give a stronger sample. 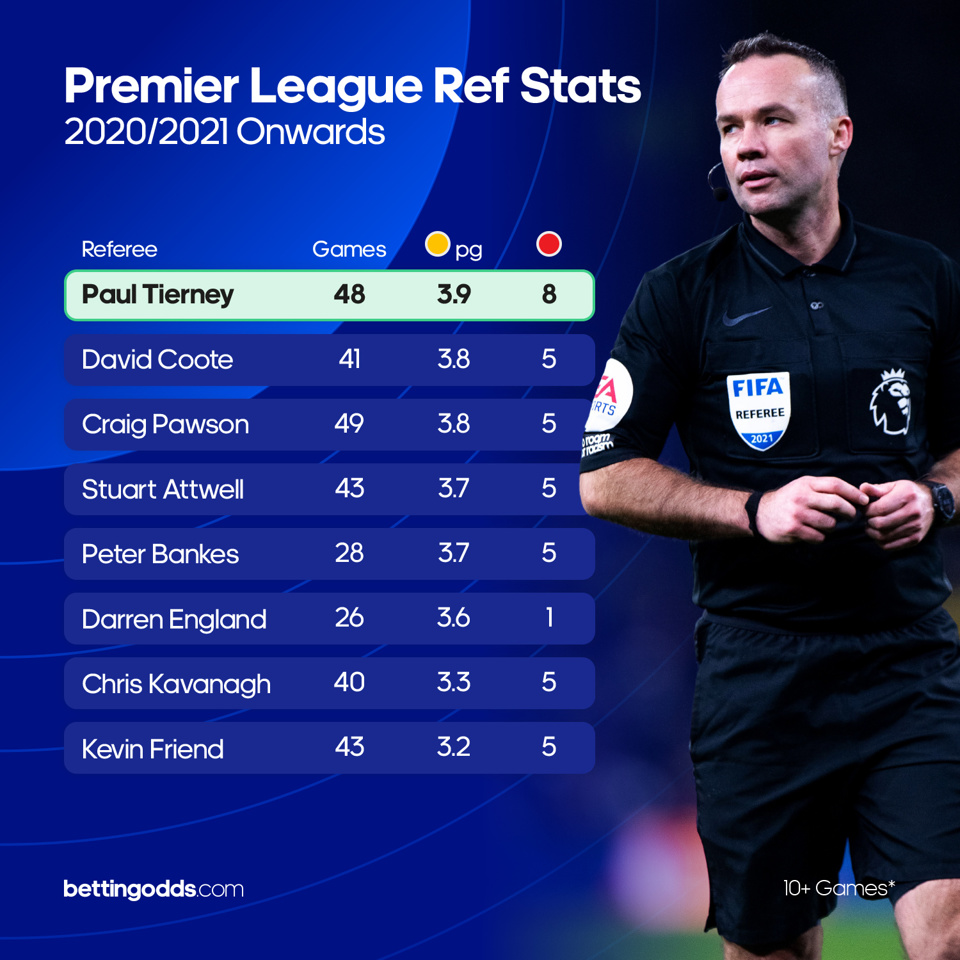 So let’s start with the biggie, which referee gives out the most yellow cards? Salford-born Paul Tierney shares a birthday with baby Jesus and comes out of our stable of stats as the official at the top of the pile, with an average of 3.9 yellow cards per game since the start of the 2020/2021 season. Tierney also ranks highly for fouls with an average of 22.4 per game and is one ref we’d take note of when choosing our card-related bets.

David Coote and Craig Pawson also rank highly here and are two of the better officials when it comes to giving out cautions. The pair have a ratio of 3.8 yellow cards per game over the course of the last two seasons in the top-flight.

Following on from the most trigger-happy referees, let's take a look at those who have been a little more stingy with the cards. Ranked bottom of the list for yellows per game is Lee Mason, who can’t give out many cards at Christmas based on his measly average of just 1.8 over the last two campaigns. It’s worth noting that Mason has only taken charge of 11 matches in this period, but is still one we’d be looking to avoid when picking out the players to be carded multiples.

Another official who possesses one of the lowest yellow cards per game figures is Andy Madley. Born in Huddersfield, Madley was promoted to the select Group 1 referees list back in 2019 and in 32 matches over the last two campaigns he averages just 2.3 yellows per game. 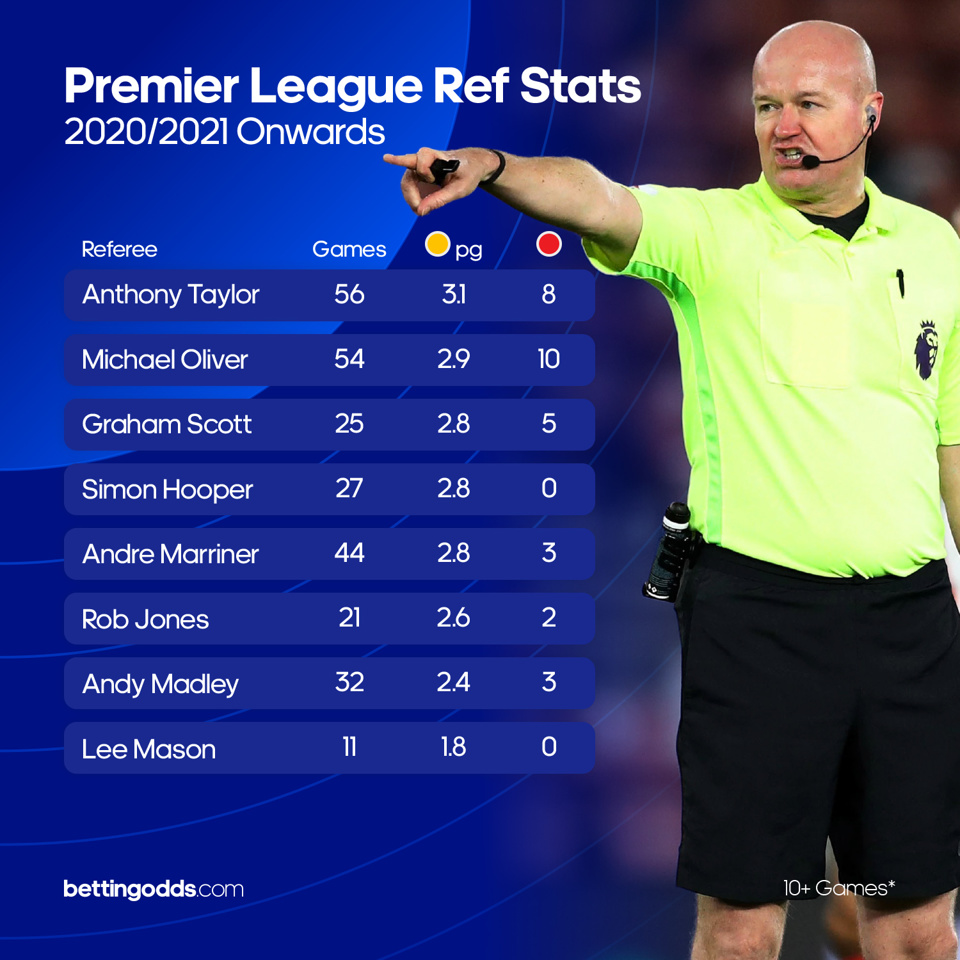 Since the introduction of VAR there is a little less emphasis on the relevance of referee red card data. Over the course of the last two seasons, both Mike Dean and Michael Oliver have given out 10 red cards; however, it’s Graham Scott who possesses the highest ratio with an average of 0.2 per game. Michael Oliver is also close to this figure showing an average of 0.19 red cards per game.

At the other end of the table for red cards we have that man again Lee Mason who has not dismissed a player in 11 matches. Mason isn’t alone though in being the only ref to not have shown a red card in the last two seasons with referee Simon Hooper also having failed to do so in his last 27 matches he has taken charge of.

You can find a full range of referee stats powered by opta by clicking below. Here you can view data around booking points, foul averages, penalties, as well cards.