Premier League Ref Watch: All the appointments for Gameweek 13 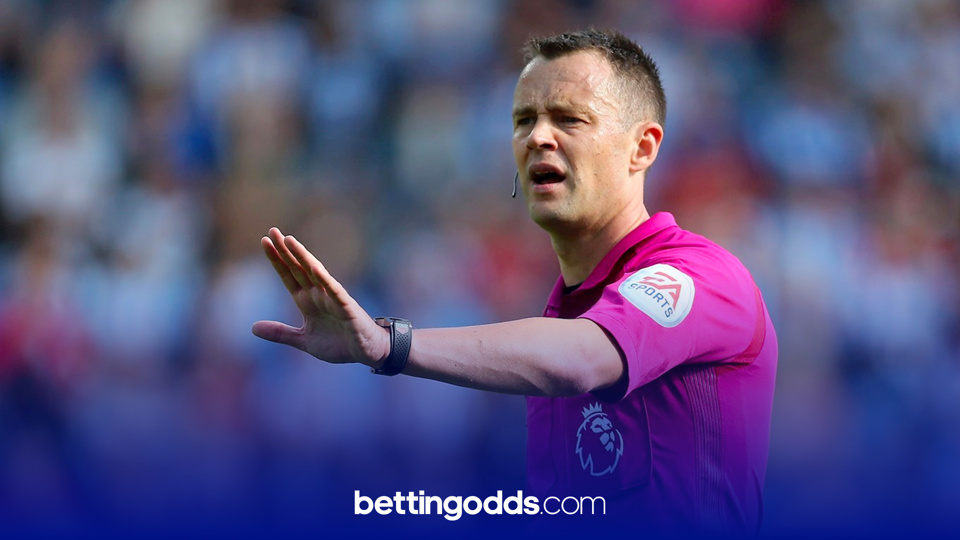 Gameweek 13 in the Premier League is spread across Tuesday, Wednesday and Thursday and we’ve taken a look into which referees are in charge of what games. We’ve also put together a stats-based treble consisting of three selections which pays around 9/2 with bet365 as part of our football tips on BettingOdds.com this week.

Which referees are officiating in Gameweek 13?

So there we have it, that’s all the referee appointments for Gameweek 13 in the Premier League. There’s some cracking games on the card with Liverpool v Spurs looking the highlight, however we’ve picked out a treble that pays 9/2 with bet365.

Referee Lee Mason takes charge of Leicester v Everton and after brandishing just five yellow cards in four matches, I can’t resist having a dabble on under 3.5 cards in this one. That’s an average of just 1.25 yellow cards per game, meaning Mason would almost have to double his tally for this season in order for this selection not to land. Yes Leicester have picked up the most yellow cards in the league this term, but with Mason in charge I’m happy to go against the grain with under 3.5 cards to be shown.

Granit Xhaka’s red card on Sunday against Burnley was the second that Arsenal have picked up in their last four Premier League games, with the club struggling in 15th position in the table. Arsenal had the worst disciplinary record in the division last season with 86 yellow and five red cards. I can see the north Londoners becoming frustrated here should Southampton take the lead and with Paul Tierney’s record of bang on four yellows per game this season, over 3.5 cards looks the appropriate play.

Only Stuart Attwell has a better yellow cards per game average than David Coote this season in the Premier League with the latter weighing in with 24 yellows shown in the six games he has taken charge of this term. Two strong physical sides here and with Palace having the third and fourth most fouled players in the league in Wilfried Zaha & Eberechi Eze, I think cards could be on the menu.

Ref Watch Treble
Leicester v Everton under 3.5 cards, West Ham v Palace over 2.5 cards, Arsenal v Southampton over 3.
9/2
Lee Mason takes control of Leicester v Everton & averages a measly 1.25 yellow cards per game this term, the lowest in the league West Ham v Palace places David Coote as the man in the middle. Only Stuart Attwell has a better yellows per game average than Coote this season Arsenal had the worst disciplinary record in the league last season. Paul Tierney takes charge and averages 4.0 yellows per game this campaign.
Odds correct as of 2020-12-14 13:15 Odds subject to change.
Free Betting Offers