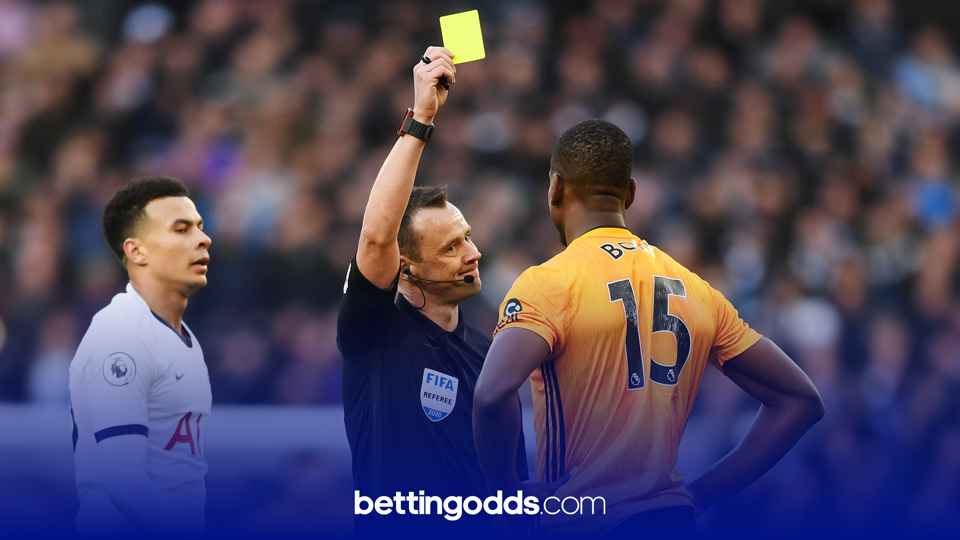 We're already into Premier League gameweek 11 and we've picked out another treble of referee related bets for you, alongside the all important betting stats for each of the ten refs involved this weekend...

Who are the Premier League referees this weekend?

Our card tips for your weekend Same Game Multis

Another week, another near-miss for our card treble as 3+ yellows in Everton Leeds landed, 2+ cautions in West Brom Sheff Utd came in, but two bookings escaped us in Fulham v Leicester for Monday Night Football. We’re back again for Gameweek 11 and have picked out three card plays, which pays an 11/2 treble with Bet365.

Saturday’s peculiar 3pm kick-off on BT Sport 1 sees Fulham travel back up North to Manchester where they face City after an impressive 2-0 victory against Leicester. The man in the middle for this one is the vinyl shop owning ref Johnathan Moss who could be finding his card brandishing rhythm with the visitors come Saturday afternoon.

Moss has a decent yellow card record of 3.17 per game this season and when the most carded team in the division will be up against the City slickers, they could be plenty distributed to Scotty Parker’s men. Fulham have had 20+ booking points in their last six games and we fancy them to get 2+ on Saturday which is ⅚ with Bet 365.

Premier League referee Jon Moss on music and football, what the players listen to - and owning his own shop.

Watch in full on Football Focus from 12:00 BST on Saturday.

Andre Marriner aka “Dre” is one of the most laid-back refs in the game and when he takes charge of two United’s at the London Stadium on Saturday evening, we think a smart play is to back Under 2.5 cards in the game at a good looking price of Evens.

He has the third-lowest yellows per game out of all the refs this season and both team’s home and away card stats suggest you shouldn’t expect a booking-fest for this one.

The current yellow card king takes charge of Sheffield United’s home game against Leicester on Sunday and after their midweek trip to Ukraine, we fancy the Foxes could feel Attwell wrath this week.

Leicester have already received 21 yellow cards this campaign, the joint 2nd most in the Premier League and with Attwell’s incredible record of 5.4 per game this season, you can expect to see yellow in Yorkshire. Evans (4) Tielemens and Mendy (3) could be in the firing line as they face a team fighting for their life but we’re taking the ⅘ for 2+ Leicester bookings.