Premier League Most Assists Odds: Harry Kane as three more assists than any other player since the start of the 2020/2021 season
By Anthony Eadson
16:48 Thursday 7th July 2022 - 6 minute read

The Premier League season begins in just 29 days time and here at BettingOdds.com, we are continuing our ante-post series and today, we’ve decided to take a look at the market for who will have the most assists in the 2022/2023 top-flight campaign. Several bookmakers including Unibet and Boyle Sports have this market available, with three places each-way being offered at 1/4 odds.

Let’s start by taking a look at those players who provided the most assists in the 2021/2022 season. Here we have included total assists, total appearances,and assists per 90 mins.

Having a look at the head of the betting, both Boyle Sports and Unibet have Manchester City man Kevin De Bruyne as the favourite, going 9/2 on him to provide the most assists. The Belgian equalled Thierry Henry’s record of 20 assists in the 2019/2020 campaign but only made eight assists last term. With Erling Haaland now added to City’s attack, one would imagine De Bruyne to strike up a strong partnership with the Norwegian, which could bolster his chances in this market, but at 9/2 he looks short enough for our liking.

Liverpool had the top three players in the assists rankings last season and this time round Mohamed Salah can be backed at 18/1 with Boylesports. Trent Alexander-Arnold finished just one assist short of Salah in 2021/2022 and is the second favourite in this market at 8/1. Fellow full-back Andy Robertson is being offered at 20/1 with Unibet, which does seem a more backable price than his Liverpool teammate.

Bruno Fernandes (10/1), Jack Grealish (14/1) and Son Heung-min (14/1), all find themselves at the top of the market, but will have to improve on their returns from last year should they wish to make the places. 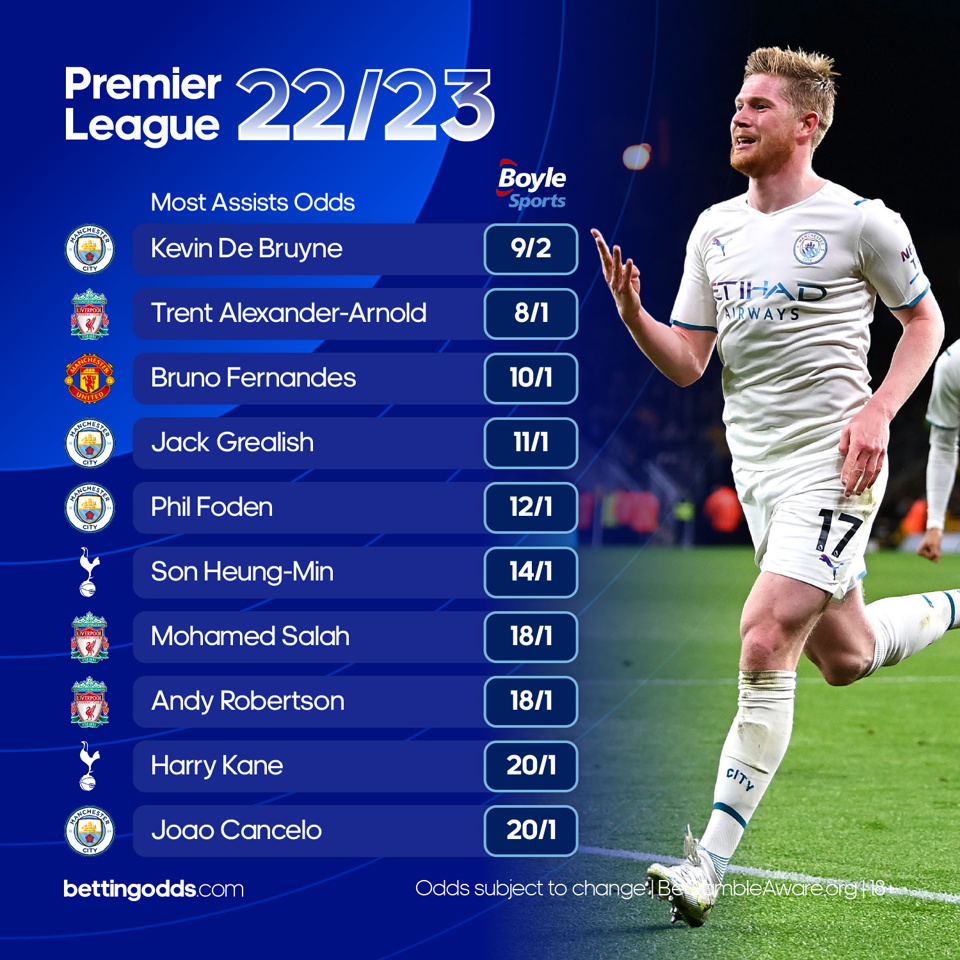 There are plenty of modern metrics which can help us make projections and we’ve taken a look back at the xA data from last season. Expected assists (xA) measure the likelihood that a pass will end up becoming an assist. Certain factors are considered when calculating the xA of a pass, with the most important being the finishing destination of the pass.

Expected assists models are created using a database of hundreds of thousands of shots. The xA is awarded from the probability that the average player would score as a result of the pass.

So what does this tell us exactly? Let’s look at Raphinha as an example. The Brazilian accumulated 6.8(xA) last season but only registered three assists. In other words, his teammates scored four fewer goals than you’d expect given the quality of chances he created for them.

There are a few players we think make appeal at the current prices with the first of those being Tottenham’s Harry Kane at 20/1 each-way with Boylesports. England’s all time-top scorer has provided three more assists than any other player in the Premier League across the course of the last two campaigns. Spurs and Kane had a slow start in the league last season and looking back at Kane’s data, eight of his nine assists came in the second half of the season. Antonio Conte is building an exciting squad and with Kane not getting any younger, his creativity has increased as he’s taken up a deeper role in recent years. At 20/1 to have the most assists we feel this is a much better price than the 6/1 on show for him to be top goalscorer.

Another who we like the look of is Liverpool’s Mohamed Salah. His 13 assists last year cannot be argued with, as he showed a selflessness we have not always seen in his game. Salah was crowned PFA player of the year and topped the charts for goals and assists. With Liverpool letting Sadio Mane leave this summer, we feel Salah will feature in more league games than any of the other Liverpool forwards with Darwin Nunez potentially being eased into the side. At 18/1, again with Boyle Sports, this looks a generous prize for someone who provided the most assists last season.

Dejan Kulusevski was instrumental in helping Spurs achieve a top-four finish in 2021/2022, putting in a string of classy performances and making some crucial goal contributions. In total, Kulusevski provided eight assists since arriving in the capital in January and with 0.57 assists per 90, he looks a tempting price at 33/1, should he continue that kind of form in the forthcoming campaign.

The final selection that we feel is worth highlighting in this market is Chelsea’s Reece James at 33/1. There’s a certain amount of uncertainty surrounding the Blues at the moment with new owner Todd Boehly vowing to bring success to the club. Raheem Sterling looks close to a move to Stamford Bridge and with more big name signings expected, Chelsea could well outperform their odds. Reece James made nine assists in just 26 appearances last term in an injury-impacted season, boasting a better assists per 90 ratio (0.43) than both Salah and Trent. Again, if he can stay injury free and provide the numbers he did last season, James could well be worth a poke here at 33’s.