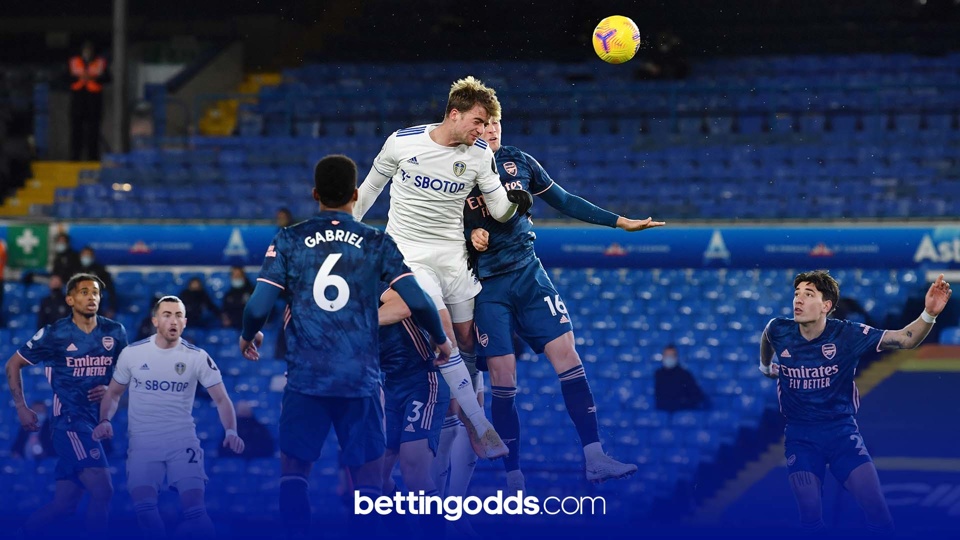 Leeds United's Patrick Bamford has registered more headed shots on target than any other player in the Premier League this season
By Anthony Eadson
12:17 Wednesday 3rd March 2021 - 5 minute read

This week at BettingOdds.com we’ve decided to focus our attention on headers. From the towering leaps, to the pitiful 50p headers, we’ve covered the lot and have taken a dive into which players top the charts this season when it comes to headed shots, headed shots on target and headed goals.

Most headed shots this season

So let’s start with headed shots in the Premier League season and it’s Leeds United’s Patrick Bamford that tops the table with 30 headed shots. Harry ‘slab-head’ Maguire ranks second, an impressive achievement for a centre half, while Aleksandar Mitrovic and Christian Benteke both deserve credit after only starting ten games each. 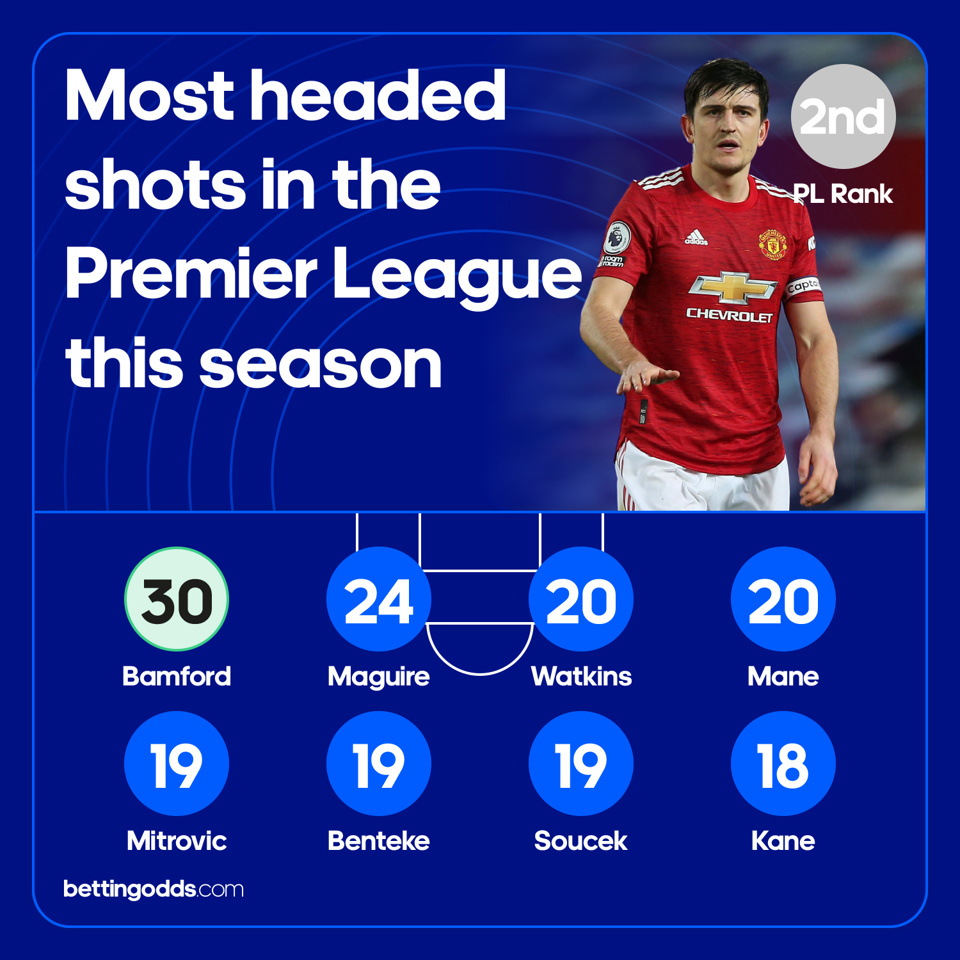 Most headed shots on target this season

Not only does Leeds United’s frontman lead the way for headed shots but he’s also ranks first when it comes to headed shots on target.  We can see here that only 30% of Harry Maguire’s headed attempts have tested the goalkeeper and Christian Benteke doing so with 47% of his efforts. 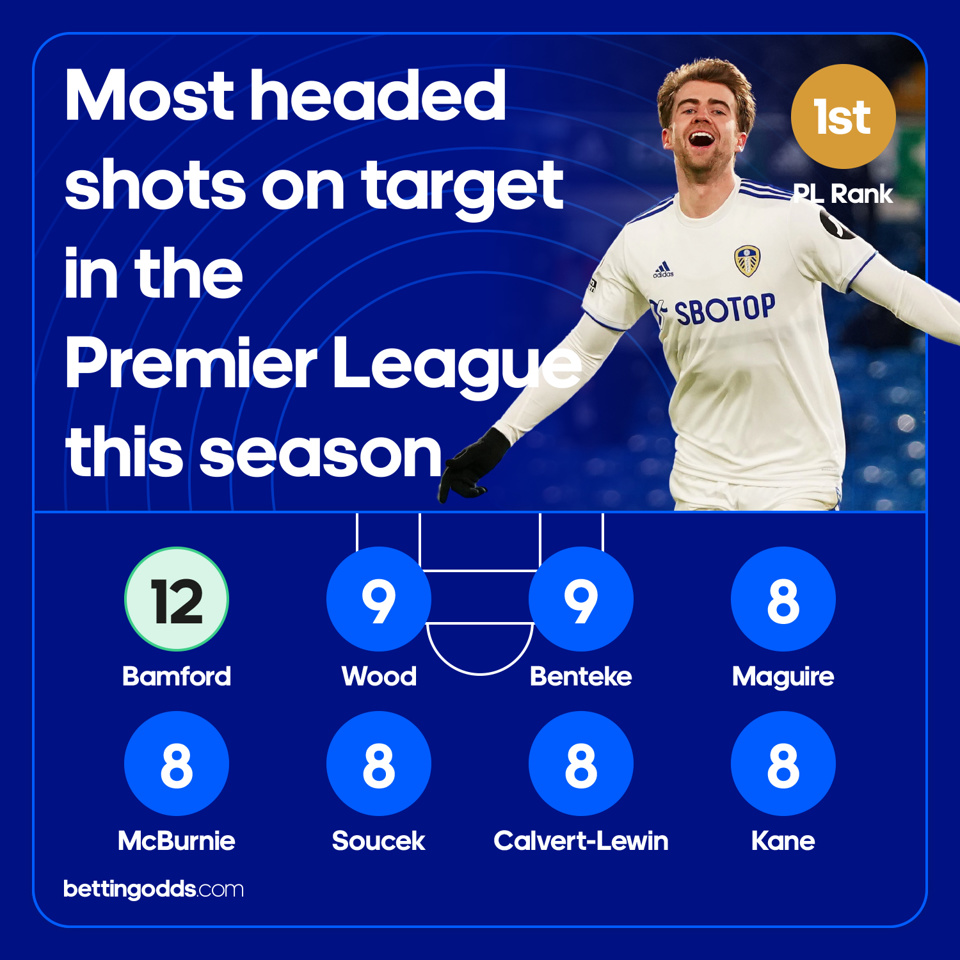 Most Headed goals this season

Unsurprisingly due to his stature, Peter Crouch has scored more headers than any other player in Premier League history with 40 to his name coming courtesy of his bonce, but it’s Everton’s Dominic Calvert-Lewin who has been the top performer this season. Under the guidance of Duncan Ferguson - who scored a hat-trick of headers in 1997 - Calvert-Lewin has blossomed this season, with five of his eight headed shots on target resulting in goals. Edinson Cavani is also a take out from the list below with four of his six goals coming via his head after only starting eight league matches.

There’s a flurry of midweek fixtures in England’s top-flight and with the numbers above in mind, we’ve picked out two selections that we like the look of for Wednesday evening.

The first features Burnley’s Chris Wood with his side taking on Leicester at Turf Moor in one of two 6pm kick-offs. Should he start the game, we’re backing the former Leicester City striker to have one or more headed shots on target in the game which is available at 12/5 with both Betfair and Paddy Power. 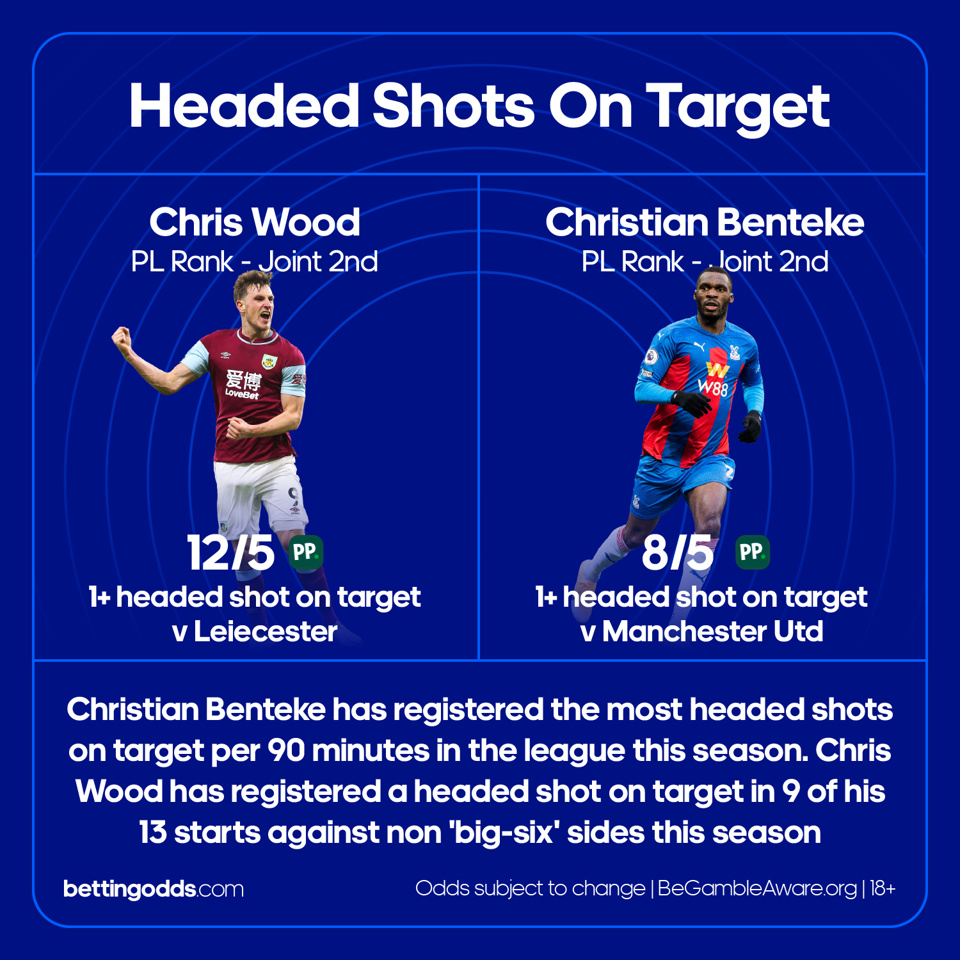 The price of 12/5 offered on Wood to have a headed shot on target by Betfair implies a 29% chance of landing, and considering his record this season against teams from outside the ‘big-six’ this looks a good proposition with Leicester looking far from their best in their last two games.

Crystal Palace face Manchester United at 8:15pm at Selhurst Park and we’re also taking a lean towards Christian Benteke to have a headed shot on target in the game, this time priced at 8/5, with both Betfair and Paddy Power.

Crystal Palace have been lacking creativity of late and set pieces may well be one of their best ways of hitting Manchester United on Wednesday evening with hopeful Benteke showing his aerial prowess.

For those interested in the double, these two selections pay just under 8/1 with Betfair which looks reasonable in comparison to the 5/1 on offer from Sky Bet. If you would like to know more about this type of market, including which bookmakers we prefer to use, you can do so here in our guide to the shots on target specials market.