Patrick Viera's side currently rank 1st with the most profit so far this season based on a £10 win stake each game
By Anthony Eadson
17:03 Wednesday 26th January 2022 - 4 minute read

We are now well past the halfway point of the Premier League season and we’ve decided to take a look at the profit and loss data for each team. The tables below show how much each side would have returned, had you backed them to win each game with a £10 stake. Manchester City currently sit first in the league standings but it’s Crystal Palace who have been the most profitable so far in the 2021/2022 campaign.

Despite winning just five of their opening 22 league fixtures this season, Patrick Viera’s Crystal Palace side find themselves top of the profit and loss table. Victories against Norwich (13/20), Everton (6/5), Wolves (13/10) and Spurs (3/1) have all yielded profit for Palace backers this campaign. However, it’s their victory away at Manchester City back in October that really propels them up the profit table. Bet365 had the Eagles priced at 18/1 pre-match before a 2-0 victory thanks to goals from Conor Gallagher and Wilfried Zaha. Palace have now taken seven points out of a possible 12 from their last four league visits to the Etihad. 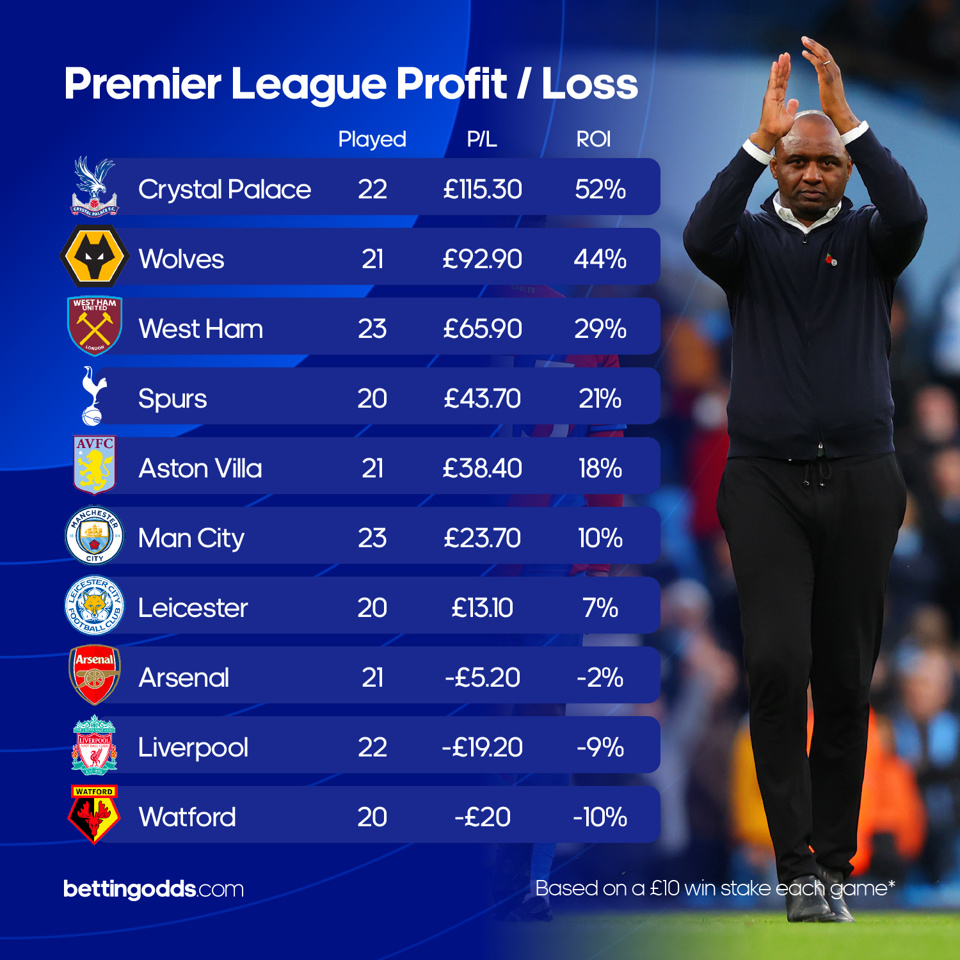 Wolves may have lost their first three games of the season all to a scoreline of 1-0, and may have only scored 19 goals in 21 matches, but the Wanderers find themselves eighth in the table. With 11 victories to their name, Wolves are the second most profitable side to bet on this season with a healthy +£92.90 so far. Away wins at Watford (23/20), Brentford (9/4), Southampton (13/5), Brighton (3/1) and Villa (3/1), have all helped contribute to the profit but it’s their first win at Old Trafford since 1980 which stands out, with Bruno Lage’s side available to back at 5/1 before their 1-0 win over Manchester United.

After accumulating 66 points and achieving a European finish last season, David Moyes’ Hammers find themselves 5th in the standings as we approach February. Six of West Ham’s 11 wins have come on the road this season, ranking them third on the list of the most profitable teams to follow this season based on a £10 win stake. Victories at home to Chelsea (15/4) and Liverpool (7/2) have been the biggest priced wins for The Irons backers so far this term as they once again look to qualify for Europe.

Ralph Hassenhuttl’s side grabbed themselves an excellent point against a Manchester City side who came into the game off the back of a run of 12 straight league wins. Saints may be 12th in the league table but rank third in the least profitable teams to bet on this campaign. This is due to four of their five wins coming against teams in the bottom half and their stand out result being a 3-2 away victory, priced at 3/1 at West Ham on Boxing day. 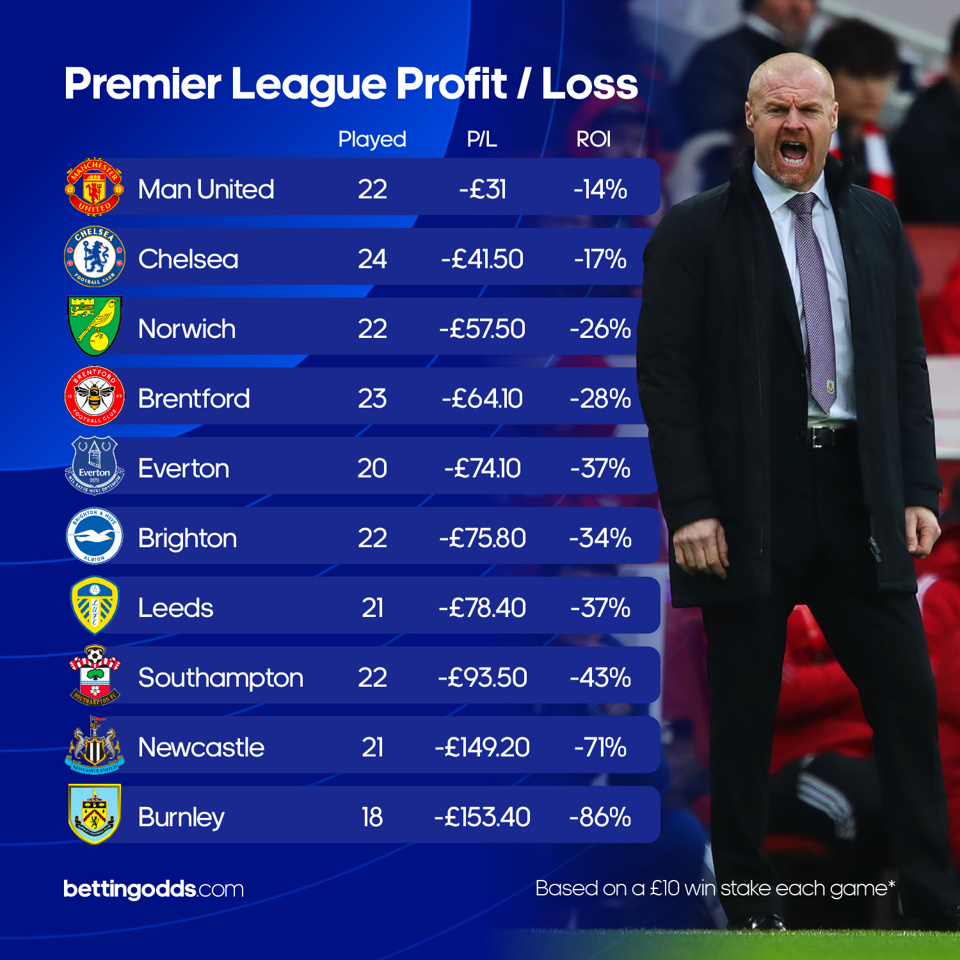 With just two wins from their first 21 games this season it’s no surprise to see Newcastle as one of the least profitable teams to side with this term. Both of those victories came via a 1-0 scoreline with the first of those coming at home to Burnley at the start of December with the Magpies priced at 13/10 before kick-off. Eddie Howe’s side also secured themselves a massive three points on their most recent outing by beating Leeds at Elland Road (3/1), but punters should be wary with Newcastle failing to win 90.4% of their matches so far in 2021/2022.

Sean Dyche’s Clarets are currently the least profitable side to bet on in the Premier League this season with punters looking at a loss of £153.40 if they had placed £10 on them each game. Burnley have won just one match since the start of the campaign which came almost three months ago now, however it is worth pointing out after numerous postponed matches, they have played up to six fewer games than some sides in the division. That solitary win came against Brentford back in October with 8/5 available on a win for the Clarets that day, but after losing Chris Wood and with a hectic fixture schedule ahead, Sean Dyche will have to work wonders to keep this Burnley side up.