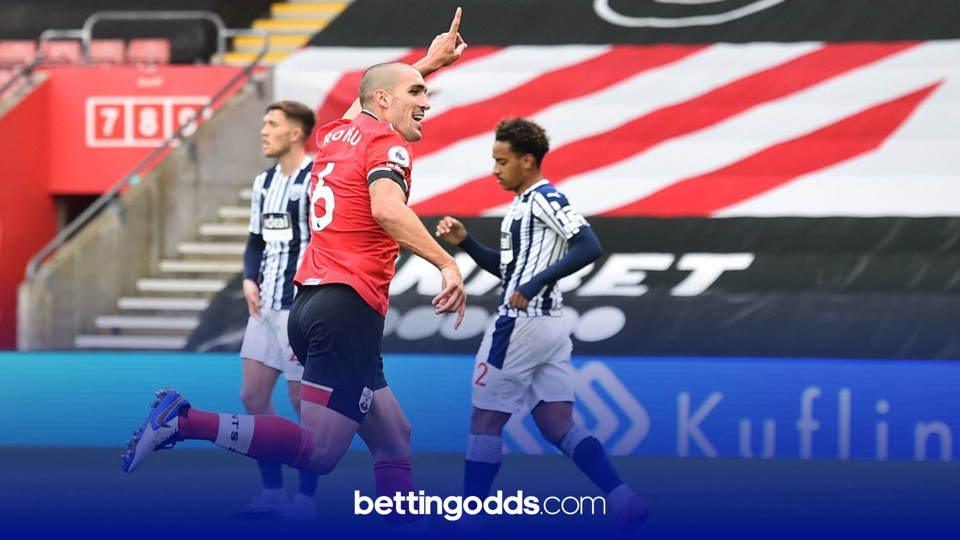 Southampton's Oriol Romeu has seen 90.9% of his shots this season come from outside the box
By Anthony Eadson
16:57 Tuesday 22nd December 2020 - 5 minute read

The variety of peripheral markets that bookmakers now offer on Premier League football continues to grow with player shots proving particularly popular with casual punters. We’ve had some success in this term here at BettingOdds.com with our shots on target football tips and you can read more about this area in our guide to shots on target specials here.

We’ve decided to take a look into which players have had the highest percentage of their shots from outside the box this season. A few of these may be worth keeping an eye on over the next few games with several bookmakers such as Betfair and Paddy Power, offering prices on players to have a shot on target from outside the area. It’s also worth noting that we have only listed players who have registered at least ten shots this campaign.

Liverpool will top the pile on Christmas day but it’s their right-back Trent Alexander-Arnold who tops the pile here with a whopping 93.3% of his shots this season coming from outside the area. The 22-year-old is Liverpool’s free-kick taker in dangerous positions but is yet to find the back of the net this season after bagging four goals in the 2019/2020 campaign. Trent has 15 shots to his name this season, 14 of which have come from outside the box, although he’s not been as accurate as in recent season’s with only 20% of his attempts testing the keeper.

A player you maybe didn’t expect to feature on here was Aston Villa’s Douglas Luiz who has registered 10 of his 11 shots this term from outside the box. Luiz found the net three times in the league last season but is yet to get off the mark this campaign. With four of his 11 shots hitting the target (36.3%), he could be worth some consideration when looking at his price to have a shot on target from outside the area with Betfair or other firms. Anything north of 5/1 would be a reasonable price here in my eyes.

Known more for his tough tackling and prolific yellow card record, rather than his long range shooting, Southampton’s Oriol Romeu also makes this list. The Spaniard has a very similar record to that of Douglas Luiz when it comes to shooting this term with Romeu also having fired in 10 of his 11 shots from outside the area. Romeu has played three more games than Luiz, although the Southampton midfielder has also seen four of his shots hit the target.

Nelson Semedo joined Wolves from Barcelona in the summer for an initial fee of £27.5 million and has been deployed as a right-wing back in the majority of games he has featured in. The two-time La Liga winner has made 10 attempts on goal this term with nine of those coming from outside the box. This approach down the right was used by Nuno Santo last season with Matt Doherty registering more shots on target than any other defender in the league with 16. Semedo is no stranger to attacking after playing at Barcelona and is another to look out for in the shots markets.

Another player with a colourful disciplinary record, Yves Bissouma has been shown five cards in his first 13 games this season, however he’s also one to consider in the shots markets, particularly from outside the area. The midfielder from Mali ranks 6th in the division this season for shots from outside the area with. 16 of the 24-year-old’s 19 attempts have come from outside the box this term with a shots per game average of 1.5.

One name you probably would have predicted to be on this list of long range specialists is Wolves’ Ruben Neves. The midfield maestro has a catalogue of absolute scorchers from distance over the last few years, but has yet to get on the scoresheet this term from his 10 starts and four substitute appearances. The 23-year-old ranks fifth this season for total shots taken from outside the box, with 18 of his 22 attempts coming from this area. With Neves being notorious for his long range-shooting I do feel he can be one to avoid in the shots from outside the area market with value often difficult to find. 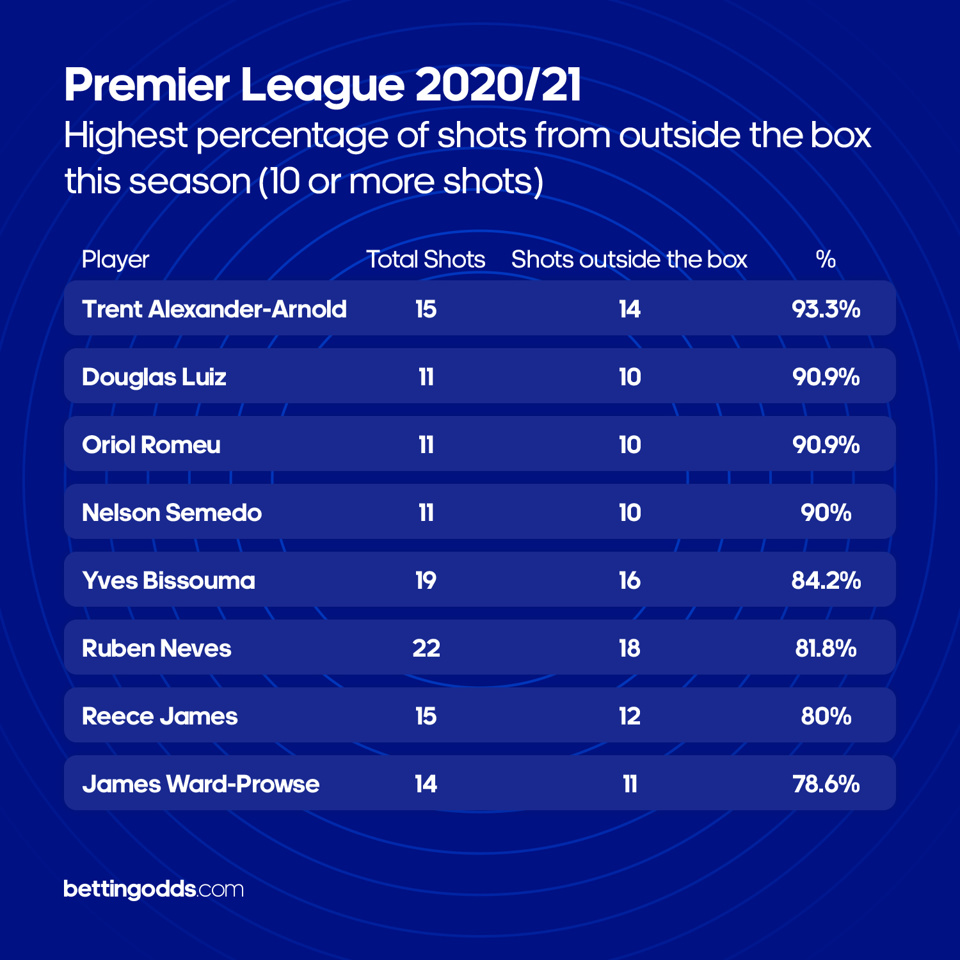 Just over a week ago we correctly recommended Reece James to have a shot on target against Wolves for Chelsea at the price of 11/4. That was the fifth time the defender has registered a shot on target with three of those coming in his most recent two matches. The main reason for this rise is due to Reece James now taking some free-kicks for Frank Lampard’s team and it’s the change in set-piece taker can often be a nice angle to find a way into a market. 12 of James’ 15 shots this season have come from outside the box and he’s one I’ll be keeping an eye on over the festive period.

The second Southampton central midfielder on this list, James Ward-Prowse has scored three direct free-kicks in the Premier League already this season. The last player to score more in a single campaign was Yaya Toure back in 2013/2014, which shows just how deadly Prowsey has been on set-pieces. With four goals and three assists this term the 26-year-old has been in good form. He has attempted 14 shots, 11 of which have come from outside the area. James Ward-Prowse is another popular selection in the shots market, but with four goals coming from 14 attempts this season it may pay to look elsewhere such as the ‘to score from outside the area’ market.