Premier League Betting: 100/1 treble with three to find the book in Gameweek 9

Jake Livermore has committed nine more fouls than any other player at West Brom this season and features in our Premier League card plays
By Anthony Eadson
14:45 Friday 20th November 2020 - 4 minute read

Gameweek 8 proved profitable in our series highlighting potential betting opportunities around Premier League players being carded and @AnthonyEadson is back for gameweek nine with three tips he has on the radar for this Saturday.

Raheem Sterling being carded against Liverpool at 11/2 was the highlight of my selections before the International break and this week I’ve picked out three players priced at 11/2, 10/3, and 13/5. For those playing the three as singles, it will be profit if all three land while the treble pays around 100/1 with William Hill.

Premier League Card Plays - Gameweek 9
Jamal Lewis, Tariq Lamptey & Jake Livermore all to be carded
100/1
Jamal Lewis has been booked three times in seven starts this season. Referee Craig Pawson takes charge who is averaging four yellows per game this season. Tariq Lamptey is marking Jack Grealish who has been fouled more times than any other player in the Premier League this campaign David Coote takes charge of West Brom's game v Man United and the referee also ranks joint second for yellows this season giving out on average four per game.
Odds correct as of 2020-11-20 14:30 Odds subject to change.

The first of three players I’ve opted for this weekend comes in the early kick-off with Newcastle taking on Chelsea where I fancy Jamal Lewis to pick up a card for the hosts. Referee Craig Pawson is in charge of this game who ranks joint second of the 19 referees this season when it comes to yellow cards brandished, with an average of 4.0 per game. Looking back at last season’s data, Pawson ranked sixth for yellows per game with 3.8 showing he is consistently one of the better officials to have onside when backing players to be carded.

Jamal Lewis has been booked more than any other player in Steve Bruce’s side this term picking up three cautions in just seven starts. Only Jonny Evans of Leicester City has more in the Premier League in 2020/21. Considering Lewis should have plenty of defending to do against Chelsea, combined with being up against the in-form Hakim Ziyech, I think he looks a good prospect to pick up his fourth of the season. 11/2 with William Hill and Skybet looks a little overpriced for me considering the referee in charge, with other firms going such as bet365 going 3/1.

Next up at 3pm I’m fancying Brighton’s Tariq Lamptey to pick up a card, which is best priced at 10/3, again with William Hill and Skybet. No player in the Brighton squad has given away more fouls this season than the talented Tariq Lamptey. The 20-year-old has been booked twice already in the first eight games of this new season and he will be in for a long afternoon on Saturday up against Jack Grealish.

Grealish is currently the most fouled player in the entire division with officials stopping play on 27 occasions for offences against the Villa star. The audacity of skill on show over recent weeks from Grealish is leaving defenders mesmerised and I expect that to continue against Brighton. 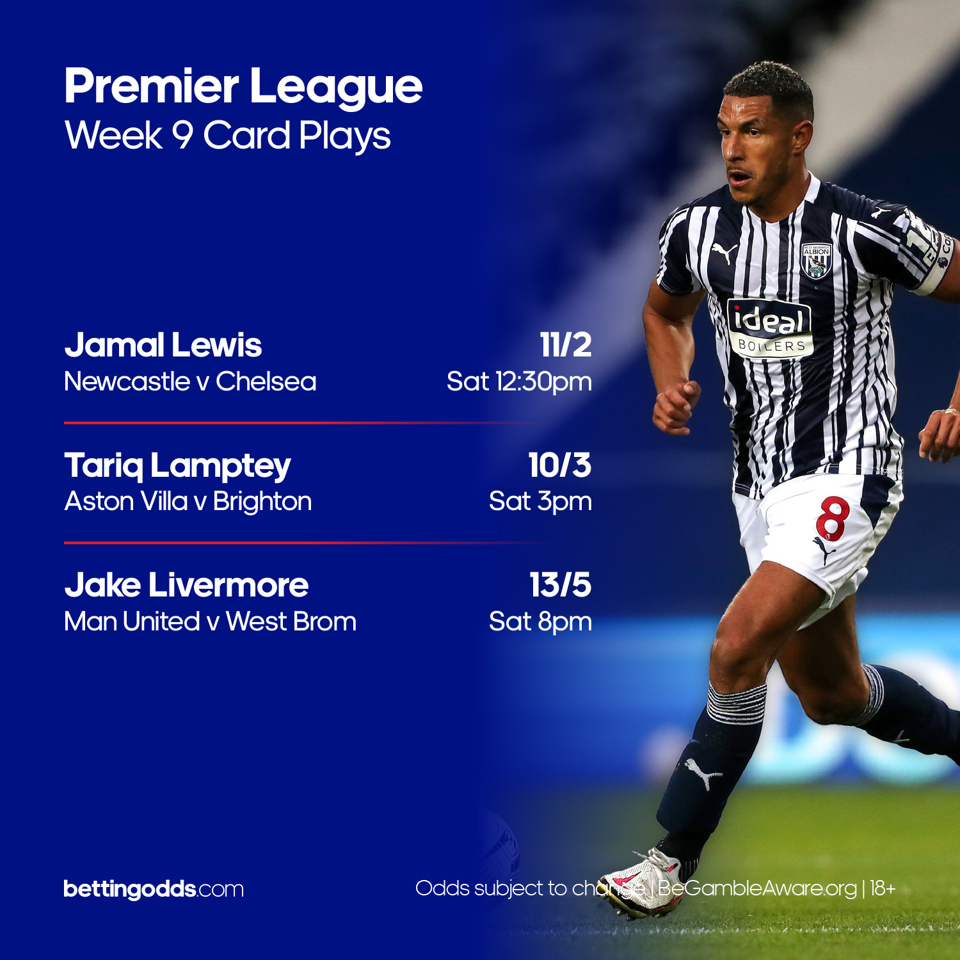 The man in the middle for the match is Michael Oliver who was one of only three referees to brandish over 100 yellow cards in the 2019/20 season with an average of 3.28 per game, ranking 11th of 20. Oliver has been a little shy this new term showing just 15 yellows in seven games, but with the form Grealish is in, I just can’t keep away from wanting Lamptey on board for a booking this weekend.

Rounding off the trio is West Brom’s Jake Livermore, who’s Baggies side travel to Old Trafford to take on Manchester United. The defensive midfielder has started all eight games in the league this season and has been booked twice in those. When it comes to fouls Livermore is leading the ranks for West Brom with 20 this season, the next closest player to him is Connor Gallagher with eleven which shows how consistently cynical Livermore is.

A huge part of the belief in this selection to land at what may appear a short looking 13/5 is that referee David Coote is in charge. After officiating four games this season, Coote is averaging bang on four per game with only Stuart Attwell having a better average this campaign. Coote currently ranking joint second for yellows per game gives plenty of confidence that Livermore can find his way into the book here in a game that should see him marking Bruno Fernandes.

As mentioned earlier, if you are playing these three selections as singles, I’d recommend William Hill, where you will make profit if any of them land. For the optimists out there the treble currently pays around 100/1 with bet365. Good luck to those following and please always gamble responsibly.