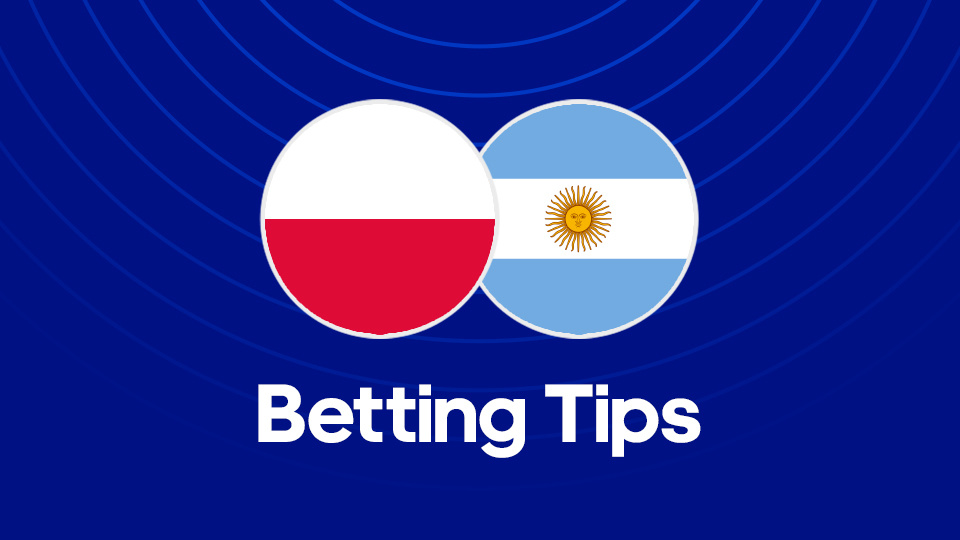 The end of the group stages are upon us, with Group C coming to a close on Wednesday with Poland facing Argentina and Saudi Arabia facing Mexico. Our man Dean Woodward is on hand with his best bets.

Poland are currently top of the group with four points after a 0-0 draw with Mexico in match day one and a 2-0 win over Saudi Arabia in match day two. A point here will secure qualification, but all three points will be needed if they want to guarantee topping group C.

With a full squad at the disposal of Czeslaw Michniewicz, it's likely the same team is deployed as the one that faced Saudi Arabia last week. A back five with Matty Cash at right wing-back, with Napoli star Piotr Zielinski in behind Robert Lewandowski and Arkadiusz Milik.

With Saudi Arabia hot on the heels of Argentina, both on three points and only separated by goal difference, Argentina will be looking to take all three points in hope of securing top spot in Group C – avoiding a potential tie with France for the runners up.

Manchester United defender Lisandro Martinez is likely to retain his place in the centre of defence with Otamendi alongside him. A trio in attack with Lionel Messi, Lautaro Martinez and Angel Di Maria look set to start again, with Paredes pushing for a return to the midfield after being benched against Mexico.

The Atletico Madrid full back is set to make his second start of the tournament when facing Poland on Wednesday.

So far in the World Cup, right backs facing Poland haven’t been very busy due to their passive approach. Both the Saudi and Mexico right backs only managed one tackle each when facing Poland and it's likely this trend continues against Argentina.

Molina’s tackles aren’t too bad for Atletico, but in the blue and white of Argentina they seem to take a huge drop. In his last twelve starts for his National side, this bet has won nine times, only clearing this 2.5 line on three occasions. Facing a Poland side who are expected to be very passive yet again, it's hard to imagine him being overly busy on Wednesday.

Poland vs Argentina Odds
Money back As A Bonus Up To £40 If Your First Bet Loses + £10 Casino
get offer get offer
#AD 18+ begambleaware.org. New customers only. Min deposit £10. Money back as bonus if first sports bet loses. Wagering requirements: sportsbook 3x at min. odds of 1.40 (2/5), casino 50x. Unless forfeited the sportsbook bonus must be wagered before using the casino bonus. Bonus expires 7 days after opt-in. Visit Unibet.co.uk for full T&C's.
Argentina win, most corners and shots on target each half
9/2
Odds correct as of 2022-11-29 11:45 Odds subject to change.

A very passive tournament so far from this Poland side, under clear instructions to contain and defend has got them into contention for qualification into the knockouts currently on four points after two matches.

Poland managed just 39% possession in the opener against Mexico and 36% possession in match day two against Saudi Arabia. It's fully expected that Argentina will dominate the ball here, therefore creating more attacking opportunities.

bet365 pay your team out as a winner if they go 2 goals ahead at any time in the match (T&C's apply). Find out more on our bet365 offers page.

Money back As A Bonus Up To £40 If Your First Bet Loses + £10 Casino
#AD 18+ begambleaware.org. New customers only. Min deposit £10. Money back as bonus if first sports bet loses. Wagering requirements: sportsbook 3x at min. odds of 1.40 (2/5), casino 50x. Unless forfeited the sportsbook bonus must be wagered before using the casino bonus. Bonus expires 7 days after opt-in. Visit Unibet.co.uk for full T&C's.
Bet £10 & Get £50 in Free Bets
#AD Bet £10 & Get £50 in Free Bets for new customers at bet365. Min deposit requirement. Free Bets are paid as Bet Credits and are available for use upon settlement of bets to value of qualifying deposit. Min odds, bet and payment method exclusions apply. Returns exclude Bet Credits stake. Time limits and T&Cs apply.
Today's Football Tips