Phil Foden may only be 20 years of age but he is already lighting up the footballing world with his continued displays of brilliance in the Premier League and Europe, so much so that bookmaker William Hill are now offering punters odds of 3/1 for the young Englishman to win the Ballon d’Or award during his career.

The Manchester City playmaker has come into his own this season, filling the void left by David Silva last summer after the Spaniard called time on his dazzling career in England having spent a decade entertaining us all in the top-flight.

Foden’s god-like talents have got everybody talking; the way he plays the game is breathtaking and there is now good reason to believe that he will become the very best in the business in the not-so-distant future.

As painful as it is to comprehend, in the coming years there will be a giant Lionel Messi-shaped hole left in the game, but in Foden it is safe to assume that we will all be left in good hands; the new kid on the block will carry the baton forward.

Age is just a number

Indeed, it was Messi himself who laid claim to the most coveted individual accolade in world football when he won the Ballon d’Or for the first time back in 2009, as Barcelona won a historic treble under Pep Guardiola.

The Argentine was just 22 when he scored a total of 38 goals - alongside providing a further 18 assists - in La Liga, the Champions League and Copa del Rey combined to help him secure the trophy. Since then, he has won five more Ballon d’Or awards; three of which came in the consecutive years after that record-breaking 08/09 campaign.

Messi, though, is not even the youngest player to clinch the Ballon d’Or, with Ronaldo Nazario winning it all the way back in 1997, aged 21, just four months older than Foden is currently. Proof that if you’re good enough, you’re old enough. 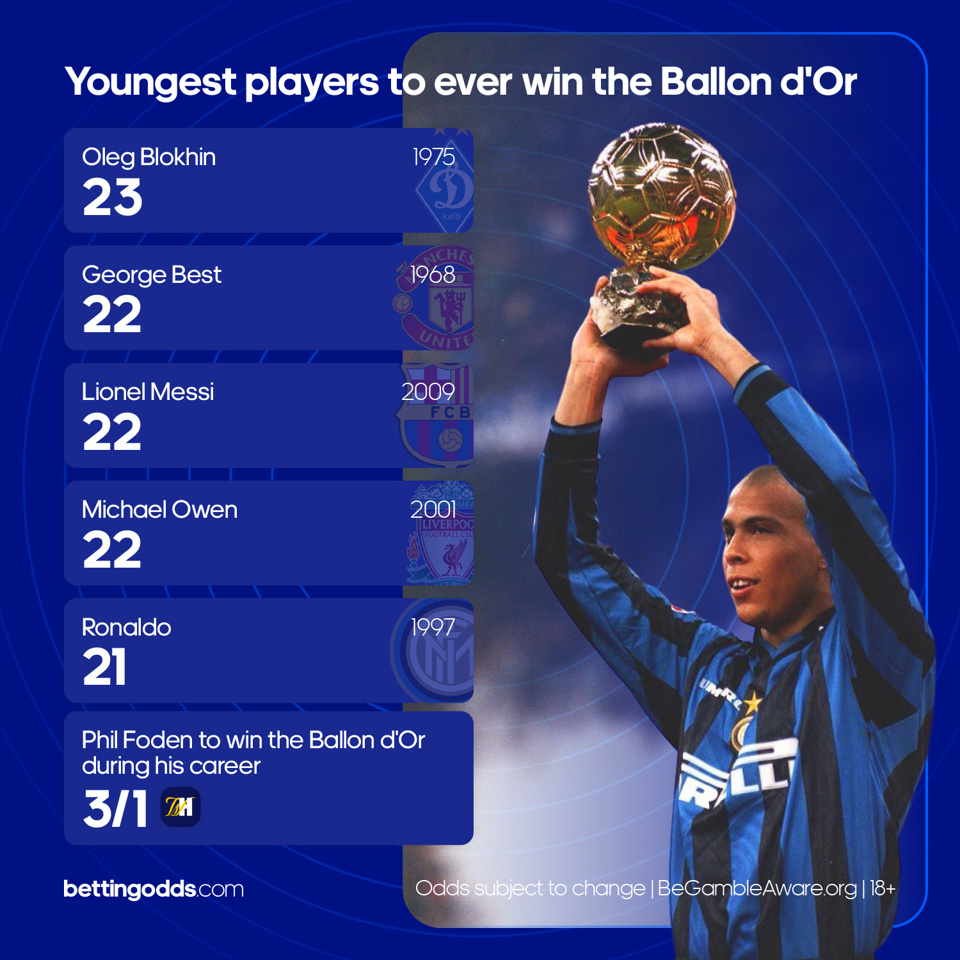 Foden has always shown glimpses of excellence and is already one of the most decorated young players in world football having won two Premier League titles, three League Cups, the FA Cup and two Community Shields from the first 116 games he has played for the club he has always supported - roughly a trophy for every 14 appearances. Impressive, to say the least.

This season, however, he has really kicked on and been given the opportunity to shine on a regular basis in the first team. The faith Pep Guardiola has shown him has been rewarded with 14 goals and nine assists in all competitions, although you can bet your mortgage that those statistics will enlarge considerably in the remaining weeks of the campaign, as City gun for a historical treble by winning the Premier League and Champions League after winning their sixth EFL Cup in the last eight seasons on Sunday.

It is success like this and figures like the ones Foden has yielded this term which only strengthens his case to win the Ballon d’Or award in the short-term future.

While this season may come a little prematurely for the Stockport native, considering the aforementioned Messi is still demonstrating the same startlingly consistent form as he has been throughout the previous 15 years, there is certainly a collective feeling among the widespread football community that it is not a matter of if Foden wins the Ballon d’Or, it’s when.

William Hill are also offering odds of 6/1 for Foden to win the prestigious award before the year 2026, which in my opinion is where the value lies. Should he continue in this vein, then it is almost impossible to imagine the 20-year-old not claiming it in the next five years.

Bellingham a 7/1 shot in the market

Foden is not the only promising young English starlet writing his own headlines this season, though. 17-year-old Jude Bellingham has blown up this season for Borussia Dortmund, now a regular in BVB’s starting XI despite his tender age.

The former Birmingham City midfielder has been a revelation for Dortmund in the Bundesliga and helped the club progress through to the quarter-finals of the Champions League, where he was a standout player across two legs against Foden’s eventually-victorious City.

Bellingham’s place in England’s Euro 2021 squad for this summer’s tournament now looks assured, and should he continue to progress at the rate he has been during the last two seasons, the limit of his capabilities seem uncapped. William Hill are offering 7/1 for Bellingham to win the Ballon d’Or throughout his career, which given his potential longevity does appear, at present, somewhat of a certainty.

For Foden, it seems unthinkable to me that the Ballon d’Or will escape him before he retires from the game, when we are all old and grey. However, 3/1 is quite a short price and one I would not be rushing to get behind considering how long this bet could remain open for. The 6/1 on offer for him to win it before 2026 is still fairly short, but a much more attractive proposition and one which I think holds a lot more value.

While it is still extremely early days, and it is an undeniable fact that the media have perfected the ability to heap unnecessary pressure on young English talent, in Foden the hyperbole seems warranted. The kid is something uniquely special. If his performances continue, which there is nothing to suggest that they won’t, then he is primed to win the Ballon d’Or award; sooner rather than later.