Pantheon of Greats: Hansi Flick and the eight other managers who have won the coveted Treble

One of the managerial arena’s most elite and prestigious circles opened its inclusive doors to a brand new member on Sunday night after Hansi Flick became the ninth boss to win the coveted treble.

To be more precise, we are talking about the Continental Treble: which consists of a national title - which in Flick’s case is the Bundesliga - the main national cup competition - DFB-Pokal - and then the crowning glory of the European Cup / Champions League.

It’s been a remarkable transformation for Bayern Munich, who back in November installed Flick as their new coach - initially on an interim capacity - after they axed Niko Kovac following a shocking 5-1 demolition at the hands of Frankfurt, a result which left the German giants fourth in the table.

Cut to the present day and Flick has overseen a truly dominant 33 wins from 36 games. He’s currently unbeaten in 30 of those matches - the last 21 have remarkably been wins - and has watched his side score on an eye-popping 116 occasions.

He’s already lifted three trophies and has a staggering win rate of 91.67%. On top of that, at the age of 55 he’s the fourth oldest manager to ever lift the Champions League trophy.

Oh, and as you already know he has a 100% record from three different finals in charge of Bayern.

The fact that only eight other managers have achieved the Continental Treble highlights just how difficult it is.

So, who else is in the club?

Jock Stein got the ball rolling back in 1966/67 when he propelled Celtic to the Scottish title, cup and European Cup, while the iconic Scot also lifted the League Cup and Glasgow Cup to complete a remarkable quintuple - of sorts.

Not long after Stefan Kovacs led the famous Ajax side of the 1970s to glory on three fronts. He may often be cast in the shadow of his predecessor, Rinus Michel, but it was the Romanian who propelled the Dutch giants to glory in the Eredivisie, KNVB Final, and European Cup. Having Johan Cruyff in his side may have helped a little. 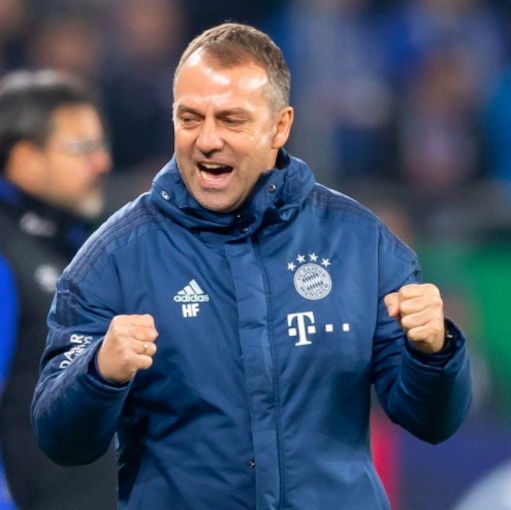 Years went by before another manager stamped his name in the Continental Treble history books. The season was 1987/88 and it was a boss of another Dutch team, Guus Hiddink, who worked wonders at PSV. Back then the current Curacao manager got his hands on the Dutch League, Cup and European Cup in what was his first full season in management!

11 years later an English club joined the party, led by another Scot as Sir Alex Ferguson’s Man Utd swept all before them in the Premier League, FA Cup and Champions League. There was rarely a dull moment; from Ryan Giggs’s famous FA Cup goal to the now legendary European comebacks against Juventus and Bayern Munich. Fergie’s juggernaut didn’t even lose a single game after Christmas, and considering that run consisted of 33 matches spanning three competitions, it really was something special.

Hansi Flick has become only the ninth manager to win the Continental Treble - he's only been in charge of #Bayern since November! 🏆🏆🏆#UCLFinal

Pep Guardiola was the first manager of the noughties to win the treble, although you could even call it a quadruple if you decided to include the Spanish Super Cup. Like Hiddink previously, it was Guardiola’s maiden managerial season, as Barcelona’s 2008/09 superstars toppled Ferguson’s Man Utd in the Champions League final, which they added to their league title and Copa del Ray success.

Not to be outdone by his rival, Jose Mourinho followed suit the following season as Inter Milan conjured up an unexpected treble success. Jupp Heynckes blasted Bayern Munich to domestic and European dominance in 2012/13, then it was Barcelona’s turn again in 2014/15 under the tutorship of Luis Enrique.