Olympic Football Odds: See the full squads & betting for each of the 16 sides at the Olympics 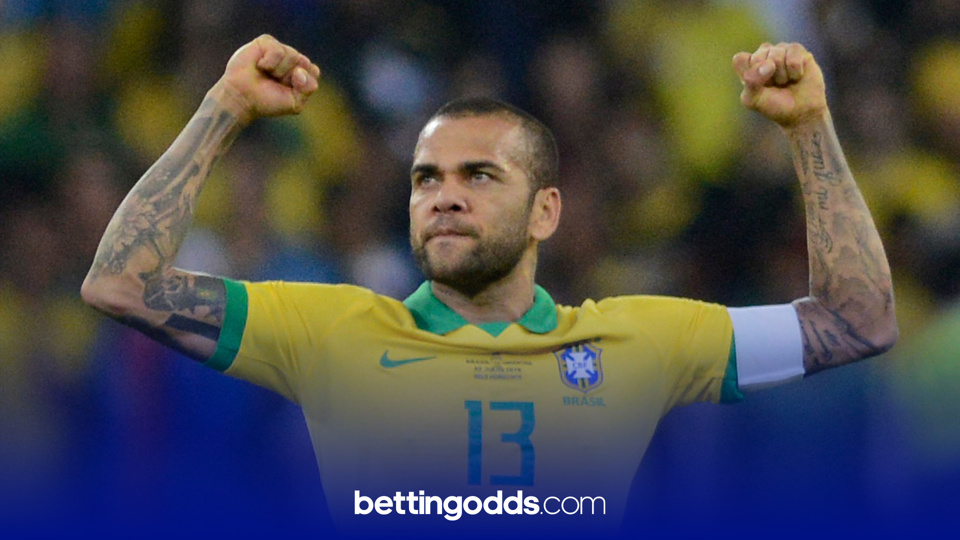 Dani Alves will feature in Brazil's Olympic squad as one of three over-age players that teams are allowed to include.
By Anthony Eadson
16:52 Friday 16th July 2021 - 8 minute read

We’ve taken a look at the full squad’s of each of the 16 nations that will be competing at the Games along with their odds to win the Gold Medal along with their odds from bet365. It’s worth remembering that the competition is restricted to under-23 players, with the exception of three over-age players in each squad.

Six members of Luis Enrique’s team that reached the Euro 2020 semi-finals are included in the Olympic squad, although it will be Luis de la Fuente who will take charge of the side in Japan. Spain are 2/1 favourites and it’s easy to see why with a spine consisting of Unai Simon, Pau Torres, Eric Garcia, Marco Ansesi, Pedri and Mikel Oyarzabal.

Legendary full-back Dani Alves who now plays for Sao Paulo has been included as one of Brazil’s over-age players, but it’s their forwards who make them look strong in this tournament. With Premier League representation from Richarlison, Gabriel Martinelli and Douglas Luiz. It’s hard to see the Gold Medal not going to one of the top two in the market with Brazil priced at 11/4.

Arsenal’s William Saliba and Manchester United target Eduardo Camavinga were both initially called up to the French squad for the Games but have both been removed after objections from their clubs. Everton left-back Niels Nkounkou is the only Premier League representative for Les Blues.

Argentina have only included one over-age player in their squad with none of the 22 who recently won the Copa America being included. Brighton’s Alexis Mac Allister makes the cut, with highly rated midfielder Thiago Almada of Velez Sarsfield also included and is one to watch out for.

Hosts Japan are 8/1 to win the tournament with a squad that includes former Southampton defender Maya Yoshida. Takefusa Kubo signed for Real Madrid two years ago and has been out on loan since but looks the star name in this squad.

Maximillian Arnold of Wolfsburg has been named as one of Germany’s over-age players,with all but one of the squad playing their league football on home soil. The Germans can be backed at 9/1 to win the Gold medal for the first time since 1976 in Montreal.

Tottenham’s Son Heung-min has not been included as one of South Korea’s despite expressing his desire to play at the Games and his club allowing him to go. Valencia’s 20-year-old Lee Kang-in will take Son’s place with South Korea priced at 16/1.

The familiar case of clubs blocking their players from going to the tournament is the case once again here with Romania, as Rangers did not allow Ianis Hagi to travel to Japan for the Games. Romania find themselves the eight biggest priced team at the tournament at 40/1.

Goalkeeper Guilermo Ochoa was part of the Mexico Olympic team all the way back in 2004 and has been to four World Cup’s with his country who can be backed at 50/1 this summer.

We are now into the three-figure prices with Egypt coming in at 100/1. Mohamed Salah was denied the chance to represent his country by Liverpool along with Mohamed Elneny of Arsenal. Former West Brom defender Ahmed Hegazi does make the squad as one of two over-age players.

There are no Premier League players who feature in the Honduras squad, with this their fourth consecutive time that they have reached the Olympic tournament.

This summer will provide a great opportunity for Manchester United’s Amad Diallo to showcase his talents for the Ivory Coast. Diallo’s teammate Eric Bailey also features in the squad as one of the overseas players for Ivory Coast along with Franck Kessie of AC Milan.

Another side who can be found at 100/1 in the market is New Zealand. The Kiwi’s have two Premier League representatives in Winston Reid of West Ham and Chris Wood of Burnley, both of which have been included as part of their three over-age squad members. Bayern Munich’s Sarpreet Singh has been left out in order to help gain a loan move this summer.

Oceania rivals Australia come next in the betting at 150/1 and they’ve included Manchester City's 22-year-old Daniel Azani in their squad. The attacker has been out on loan since 2018 and is the youngest player to ever feature at a World Cup for Australia.

There are no representatives from the Premier League in Saudi Arabia's squad for the Olympics with all three over-age players having played in the last World Cup. 250/1 is on offer for those who think Saudi Arabia can cause a major upset.

Rounding off the betting at 250/1 are South Africa who provisionally named a huge 78-man squad. Percy Tau of Brighton and Southampton’s Khanya Leshabela had originally been named but will not be appearing in Tokyo.