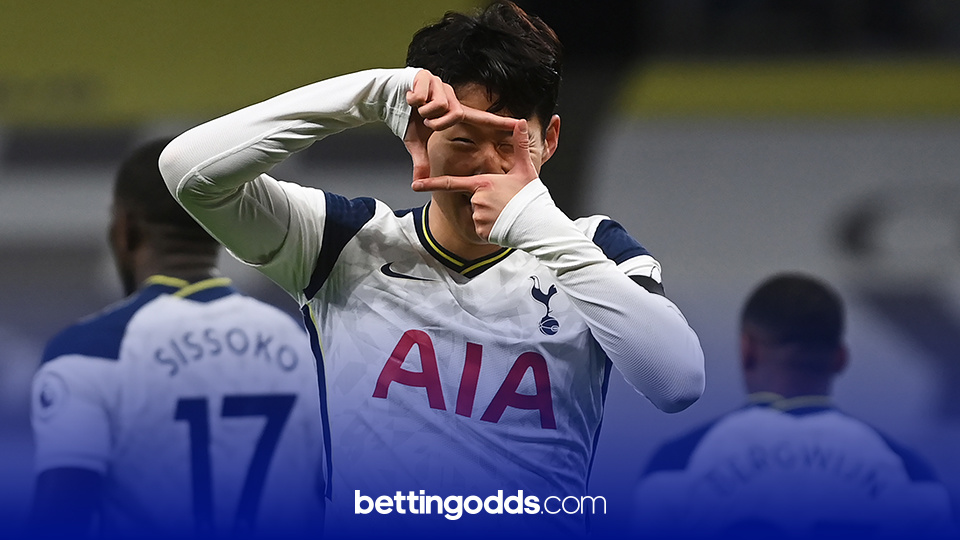 Prior to last weekend's game against Burnley, Son had scored with seven of his last eight shots on target
By Ian Ford
11:30 Saturday 21st May 2022 - 4 minute read

Tottenham travel to Spurs on the final day of the Premier League season, looking to complete the job of qualifying for the Champions League and securing a fourth place finish. We’ve previewed the action and provided you with our best bets for the game from Carrow Road.

Spurs need just a draw to guarantee themselves a top-four finish barring a win for Arsenal and an unthinkable 16 goal-swing. Half way through December, Tottenham were priced at 9/2 to finish in the top-four, but heading into the final day they are now being offered at 1/33 with most firms.

A slip up looks unlikely here for Antonio Conte’s side but they have only left victorious on one of their last five trips to East Anglia. However, this is a Norwich side that has conceded at least three goals in five of their last six home matches, with Spurs coming into this game undefeated in nine of their last ten top flight matches.

Dejan Kulusevski is expected to come back into the starting line up for the visitors at the expense of Lucas Moura who was given the nod from the off against Burnley last weekend. Davinson Sanchez is expected to continue in a back-three alongside Eric Dier and Ben Davies. Cristian Romero, Matt Doherty Sergio Reguilon, Oliver Skipp and Japhet Tanganga are all sidelined through injury.

Norwich also have a lengthy list of absentees for their final game of the season. That includes Ozan Kavak, Josh Sargent, Kenny Mclean, Adam Idah, Christoph Zimmermann. Ben Gibson and Billy Gilmour are both a doubt.

With Spurs looking to finish the job of qualifying for the Champions League on Sunday, the bookmakers have priced them as short 1/5 to take all three points, with a high volume of shots expected with 18+ for the visitors priced at 11/10.

A certain amount of urgency may be required should Norwich frustrate Spurs and keep the game at 0-0. With this in mind we’re touting Emerson Royal to have 2+ shots, which is available at 11/5 with both Betfair and Paddy Power.

The Brazilian wing-back has recorded six shots in his last three matches, which have been against Liverpool (1), Arsenal (3), and Burnley (2). Two of those six have hit the target and he’s a player who’s been enjoying plenty of time in the final third in this system that Antonio Conte deploys. He may not be the most eye-watering of prices at 11/5 but with a place in the top-four at stake and a lower quality opponent in Norwich, there’s plenty of reason to believe Emerson can let off at least two attempts on Sunday.

The second selection we are touting is Son Heung-min to be the first goalscorer in the match. After being brought off as a substitute against Arsenal last week, the frustration was clear to see from Son as he goes in search of the Premier League top-scorer award.

The Korean is just one goal behind Mo Salah heading into Gameweek 38 and he will be looking to shoot at every given opportunity against Norwich. Son is a player who we often prefer to back in the scorer markets rather than the shots markets. The 29-year-old has the best shot accuracy of any of the top-25 scorers in the league this season and prior to last Sunday’s game against Burnley, he had scored with seven of his last eight shots on target!

With the golden boot in mind, we’ve decided to take a punt on Sonny to score the first goal, priced at a boosted 7/2 with bet365. Other firms such as Betway have this same selection at just 2/1 and we feel this is a generous offering here from 365. Best of luck to anyone having a bet on the final day of the season.