Could Luke Garrard be an option for Stevenage?
By Gabriel Sutton
11:13 Tuesday 16th November 2021 - 7 minute read

EFL pundit Gab Sutton picks out five contenders to be the next Stevenage boss...

Paul Buckle has rushed up the list to a slim 6/4 for the Stevenage job but, if we’re honest, this is not so much an argument for why he should get the job as how he might.

The 50-year-old was born in Welwyn Garden City, Hertfordshire. And the truth is, it’s also hard to see how Buckle is supposedly in contention, or if he has any contacts at the club that are influencing proceedings, but nonetheless it’s hard to ignore how he’s risen up.

Because Buckle is such an unlikely name, it is tempting to think there must be genuine interest because nobody would bet on him becoming manager if they did not have reason to believe the story had credence.

Firstly, Buckle has not worked in England since a disastrous stint at Cheltenham in 2014/15, when he was chiefly responsible for the club’s relegation to the National League.

Since then, he's had two jobs in the USL Championship, which is the second tier of soccer in America, at Sacramento Republic and Hartford Athletic, the second of which being as a technical advisor.

Steve Evans is a divisive figure in English football: you love him if he manages your own team and hate him if he doesn’t.

The demanding Scot, though, has a respectable record, having won back-to-back promotions in his career with Crawley and Rotherham, more recently converting League One Gillingham from relegation fodder to a regular fixture in the top half.

Evans can drill a side into shape and his teams are always extremely difficult to play through, so he would make aggressive ball-winner Jake Taylor central to his plans, likewise defensive battler Scott Cuthbert.

The elephant in the room is that Evans already has a job at Gillingham, in the division above too. Would he leave what he’s built at Priestfield for what is immediately a League Two dogfight?

The fact Evans has shot up the list to be 4/1 must say something, but this is all about whether the interest is there from his perspective. There’s no doubt he has the credentials to immediately take this side away from trouble, and into contention next season. 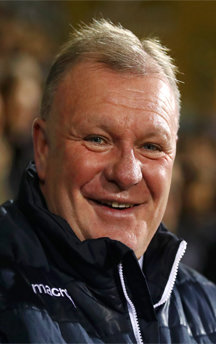 Andy Woodman is doing an excellent job at Bromley.

Yes, the Ravens are pushing the boat out this season and have ambitions of challenging for the Play-Offs in the National League, but going 10 league games unbeaten is a huge achievement, even if his side were somewhat fortunate to continue the run last time out at Stockport.

Though Woodman has a light-hearted, jovial personal, though is no doubting how seriously he takes his job.

He inherited the template of a workmanlike 4-4-2 outfit from Neil Smyth and turned them into an attacking 3-4-1-2 outfit that will not let the odd heavy defeat shake their confidence or disrupt their vision.

There is an argument for a back-three suiting Stevenage, especially in terms of protecting Cuthbert from one-on-one scenarios in wide areas, whilst giving talented defenders like Terence Vancooten more scope to explore the flank.

Although Woodman’s Bromley have one of the oldest XIs in the National League, with reliable figures like Byron Webster, Liam Trotter and Michael Cheek proving crucial, youngsters have also had their chance.

In fact, George Alexander – somebody Millwall fans were baying to see more of – was willing to commit to a permanent move to Hayes Lane.

Appointing Woodman could be a step towards enticing a potential future asset like Alexander to also move to Hertfordshire.

Compensation would be required. Woodman was appointed manager of Bromley as recently as March, which means he still has a sizeable proportion of his contract left to run and would not come cheap.

Plus, he lacks the standing in the game of somebody like Evans, mentioned above.

This could be an excellent appointment if Phil Wallace and the board are prepared to pay the compensation.

Since taking charge of Boreham Wood six years ago, when he became the youngest manager in English football’s top five tiers, it has been quite the adventure.

Has it all been hunky dory? Not exactly. The Wood have endured disappointing campaigns in 2018/19 and 2020/21, making the pattern feel like one underwhelming season followed by one good one.

Nonetheless, it’s hard to argue with the overall results on a tightly-knit squad and a modest budget, up against a mixture of ex-league juggernauts and well-backed up-and-comers.

Indeed, the fact Boreham Wood can respond to tough seasons defiantly is credit to Luke Garrard, who values character and resolve in potential recruits, which shows in the most recent signings of Will Evans, Jacob Mendy, Josh Rees, Frankie Raymond and Scott Boden.

All fit Garrard’s favoured 3-4-1-2 system and when the former AFC Wimbledon defender has a favoured formula, he does not tend to tamper with it: just 11 changes to the starting XI have been made in 14 matches.

Garrard steered the Wood to two Play-Off berths in his six full seasons in charge, and is on course deliver a top seven finish this season, with the possibility of a title charge.

Given how Stevenage like to make the most of a thriving local non-league scene, appointing Garrard – somebody with excellent knowledge of and contacts in the lower division – would be an excellent move.

As with Woodman, compensation could be a hurdle, although Wallace was prepared to head-hunt Dino Maamria from Nuneaton back in 2018.

It may be a smarter move to part with the compensation required to approach Garrard than Woodman, because the former is 14 years younger and is more likely to attract interest from higher up the divisions if successful.

Whether Garrard wants to leave Boreham Wood when he has an immediate opportunity to secure the first promotion of his managerial CV, though, remains to be seen.

"There's only one team in north London"
@BOREHAM_WOODFC boss and Arsenal fan Luke Garrard once trained in his Arsenal kit after being signed as a schoolboy by Spurs 😂😂😂 #AFC https://t.co/VQMhPkadfM

Daryl McMahon led Ebbsfleet United into the National League Play-Offs in 2017/18, despite the financial troubles that would ultimately hamper the club.

In that sense, the Irishman has been somewhat unfortunate that his first two clubs had been structurally unstable, with Macclesfield – where he spent five months – in a similar position in League Two.

He is now doing a good job on calmer seas at Dagenham & Redbridge, despite a slightly disjointed and inconsistent 2020-21 campaign.

The Daggers now sit 7th in the National League and are the top goalscorers in the division, with Angelo Balanta, Paul McCallum and others sharing the goals out.

Like Woodman and Garrard, McMahon also favours a 3-4-1-2 with attacking wing-backs in Myles Weston and Mauro Vilhete.

At Stevenage, right-sider Luther Wildin certainly has the athleticism to be an effective wing-back, but Max Melbourne and Ben Coker may be considered too conservative on the left.

There is the option of moving Melbourne into an overlapping, left-sided centre-back role and converting Bruno Andrade into an inverted left wing-back who will simply drive forward into space.

Yep, you’ve guessed it, compensation is one sticking point.

Plus, while Luke Garrard’s sides tend to be solid with a core of experienced players in key areas, McMahon has struggled to find the defensive balance at Dagenham: this could be dangerous in a relegation scrap.

If Garrard is unavailable, McMahon would certainly make sense as another talented young coach.

Dagenham & Redbridge manager Daryl McMahon is in at 12/1 to jump up a division to Stevenage... 🆙