Could 50/1 priced Roger Schmidt be an outside candidate for the Man Utd job? 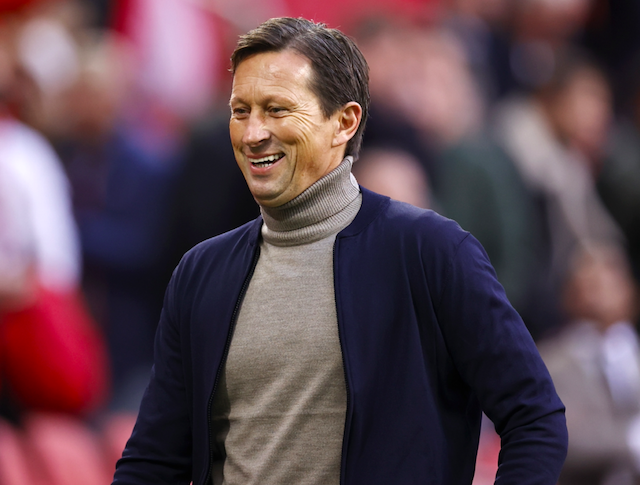 Roger Schmidt has opted not to extend his contract at PSV past the end of the season.

“We have used the past few weeks to have good conversations,” revealed PSV’s director of football affairs John de Jong on Thursday in a club statement.

“It was our intention to continue with Roger. But Roger has decided to retire at the end of the season. We think that’s a shame, but it doesn’t change our goal to win as many prizes as possible this season.”

It’s news which could well alert clubs around the continent.

Schmidt is currently battling it out with Erik ten Hag (Ajax) and Arne Slot (Feyenoord) for Eredivisie glory. PSV were leading the way up until a recent 2-1 defeat to Ajax, who subsequently now hold a two point lead over Schmidt’s troops with 14 games to play; Feyenoord are a further four points back.

Earlier this week Ten Hag emerged as the 6/4 favourite to become Man Utd manager next season, while rumours linking Mauricio Pochettino (5/2) to Old Trafford continue to gather steam following reports that the club have told the Argentine that they will part ways at the end of the season.

Spain manager Luis Enrique (25/1) and Sevilla’s Julen Lopetegui (33/1) are also believed to be under consideration, while interim boss Ralf Rangnick is priced at 5/1 to extend his stay in the dugout.

Meanwhile, Schmidt is someway back at 50/1 in the betting with Paddy Power.

There’s no question that he’d jump at the chance to manage Man Utd, which would be bar far the most prominent post of a managerial career that has taken him from his homeland in Germany, to Austria, China, and now the Netherlands.

Schmidt has worked with Rangnick before, at Red Bull Salzburg, where he was manager and Rangnick sporting director. Similarly to the likes of Marco Rose, Ralph Hasenhuttl, and Jesse Marsch, he’s been heavily influenced by the “godfather of gegenpressing”.

“We exchanged a lot of ideas and worked well together for two years,” Schmidt previously said of Rangnick. “At the end of it, a football that was even more extreme than what Ralf knew from Hoffenheim was born.”

Schmidt led the Red Bull club to the league and cup double - his side hammered in 110 goals in just 36 league games during that memorable 2013/14 season - which attracted the attention of Bundesliga side Bayer Leverkusen.

Under his leadership, Leverkusen qualified for the Champions League on two occasions (4th & 3rd), installing an intense, aggressive, and attacking brand of football.

“Schmidt has turned Bayer from a functional team of traditional, physical players into something that best resembles a mix of Jürgen Klopp’s Borussia Dortmund side of the not‑too‑distant past and what Guardiola implemented at Bayern.”

- Stefan Bienkowski in the Guardian back in 2016.

Schmidt’s career has since taken him over to China where he won the Chinese FA Cup at Beijing Guoan, while in his first season at PSV he briefly mustered a title challenge but in the end had to settle for a runners-up spot behind Ten Hag’s dominant Ajax.

While it’s now emerged that he’ll conclude his spell at PSV in the summer, the club are right in the fight for the title.

Man Utd are likely to favour more high-profile and successful options, yet Schmidt’s relationship with Rangnick combined with his style of football could see him crop up on the club’s managerial radar.

Either way, his decision to leave PSV at the end of the season means that the 55-year-old is likely to be in hot demand this summer. A return to the Bundesliga could well be on the cards.

Until then, he has a Dutch title to win.