There’s just under a quarter of the Premier League season remaining and it looks like the title race is going to go down to the wire. After being priced as big as 10/1 in January, Liverpool have now been backed right into 6/4 with BetVictor to claim their second league title in three years.

An interesting market that we have spotted here at BettingOdds.com comes from William Hill, where they have priced up ‘The player to finish with the most yellow cards in the Premier League this season’.

Although there may be a strong chance of this market finishing with a split-payout if more than one player finishes on the highest total of yellows - we’ve decided to take a look at the names at the head of the market and who we like the look of.

The Three Players on nine

There are a few things to consider when dissecting this market, with the first and most obvious one of those being the current number of yellow cards that players have received.

Three players from the Premier League have collected nine yellow cards in 2021/2022 - Junior Firpo, Tyrone Mings, and Ruben Neves. Let’s start with Firpo and out of this trio, he has the highest yellows per game average (0.47) with nine cautions in just 19 appearances.

Unsurprisingly, given these three players have the most yellows this season, they are the three shortest priced in the betting with Mings (8/1), Neves (9/1), and Firpo (10/1). The slightly bigger price on the latter may be due to him having a knock and could miss Leeds’ next two games against Southampton and Watford. 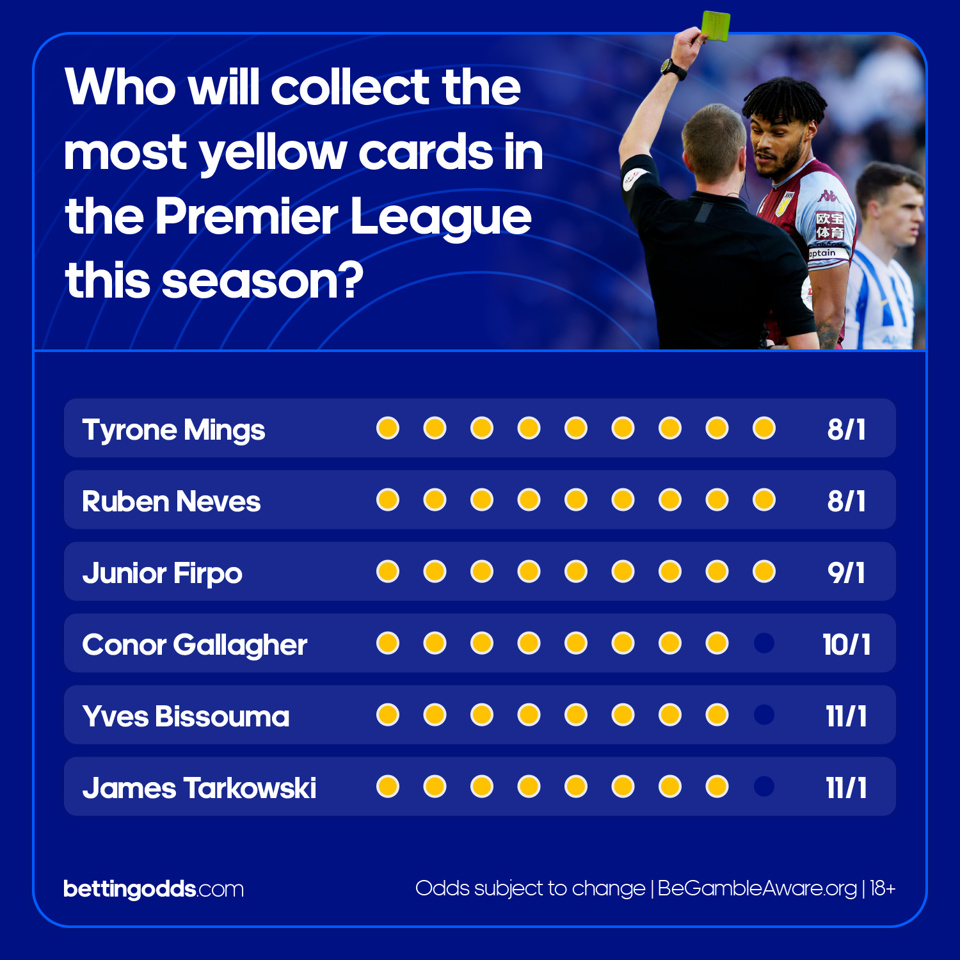 Another factor that punters may want to consider here is which players have the highest yellow cards per game figures. Those who have featured in fewer games may be worth more consideration and we’ve listed those figures for the players who are currently on, eight and nine yellows this season, below.

As you can see from the above, of all the players to have collected eight or more yellow cards this season, Cristian Romero has the highest yellow cards ratio, picking up one in every two appearances this season (0.50pg).

Due to numerous matches being postponed earlier on in the campaign due to Covid, there is quite a variance in the amount of matches that teams have played. West Ham, Wolves, Brentford and Leeds have all played as many as 30, while Burnley, Leicester and Everton have played only 27.

As with every season, when we come into the final few games, certain teams have a lot more to play for than others. From relegation battles to fighting for the Champions League places, there are certain players who may need to put their body on the line, a lot more than teams destined for a mid-table finish who may be described as ‘on the beach’. 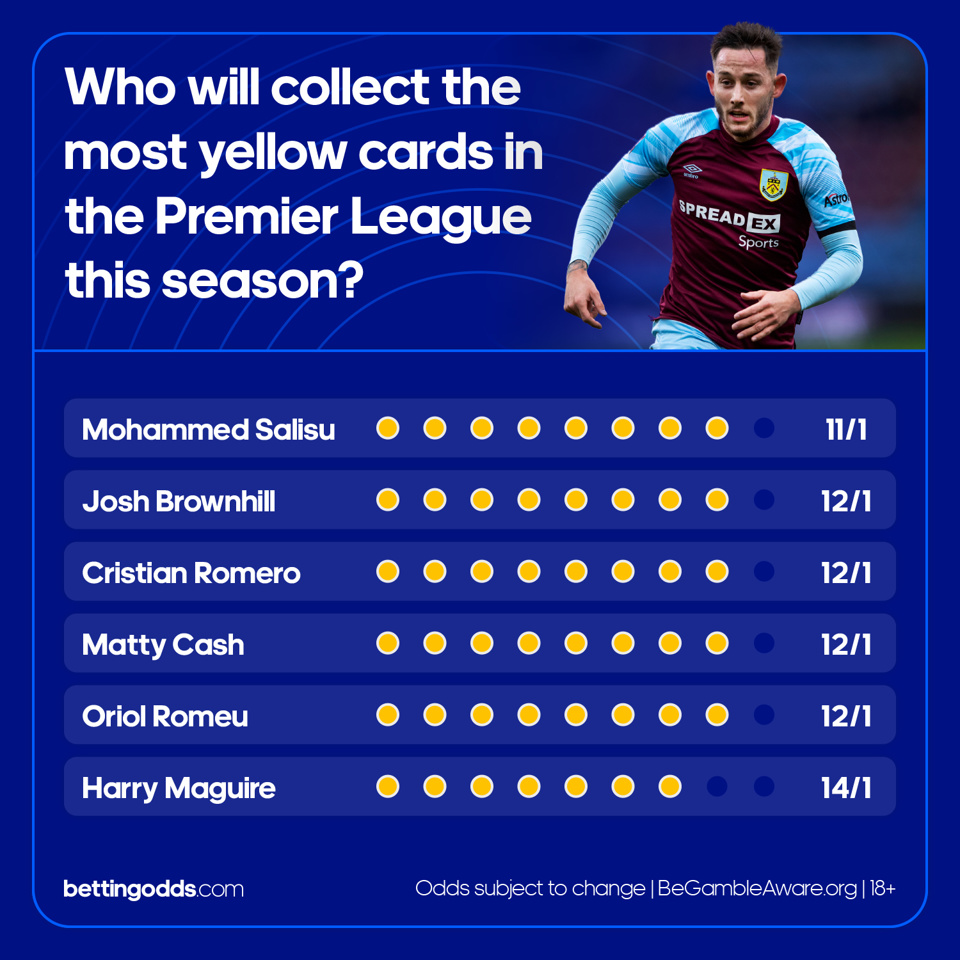 After digging through the data, we have found three names that we like the look of in this market. The first of those is Burnley’s Josh Brownhill (12/1). The midfielder is by no means the shortest price in the market, but he does make plenty of appeal based on Burnley playing as many as three matches fewer than other sides. The Clarets are fighting for their lives down at the bottom of the table and with 11 games remaining I think there’s a strong case to be made for Brownhill picking up a good few before the end of the campaign.

One player who really stands out when it comes to ‘yellows per game’ is Tottenham’s Cristian Romero (12/1). Of all the players in contention to be the ‘most cautioned’ in the division this season, the Argentine possesses the highest ratio, picking up a yellow in one in two appearances (0.50pg). With Spurs also looking to push Arsenal all the way in search of a top-four finish, they still can be classed as having ‘plenty to play for’.

The final name we’d be considering here is Tyrone Mings (8/1). The Aston Villa centre-back does have an edge over the other two players to have nine yellows this season, due to both Ruben Neves and Junior Firpo having injuries. This could allow Mings to pick up another yellow or two before we next see the other two back on the pitch. Another little edge here could be that Aston Villa’s next game is away at Wolves and Tyrone Mings was booked in the reverse fixture. Against no other side in his career has Mings been shown more yellows against than Wolves and Watford (3) and with the trip to Molineux at the start of April potentially bringing his 10th caution of the campaign. 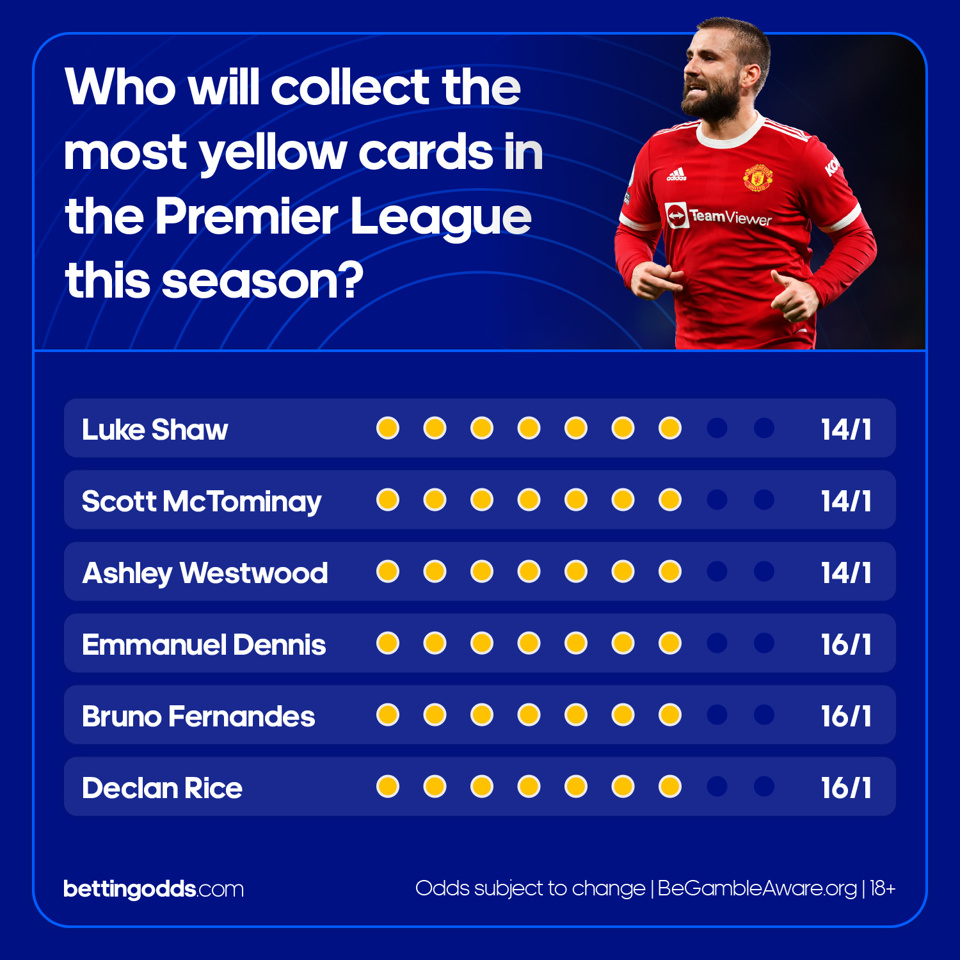