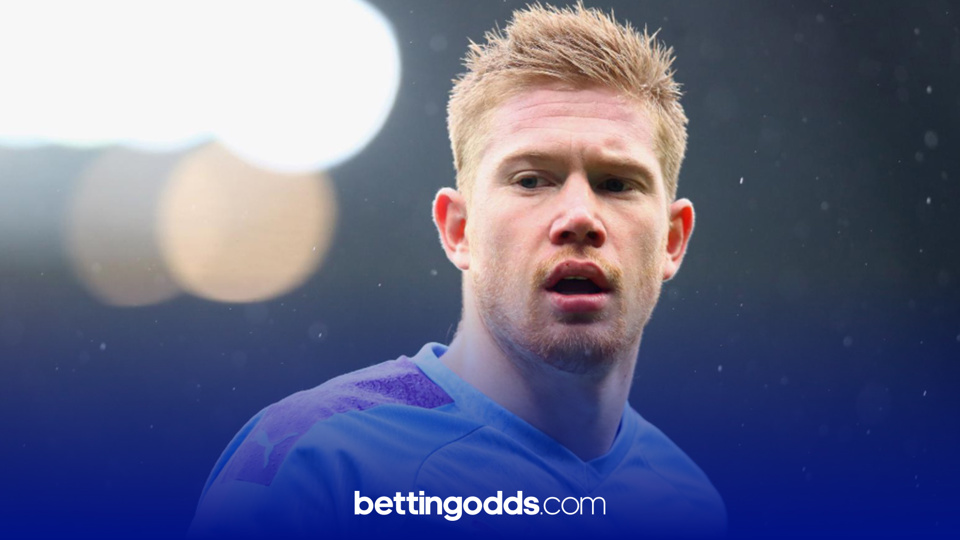 Kevin De Bruyne has has the highest shots on target average of any City player to play more than three games this season and features in our football tips for the game against Marseille
By Anthony Eadson
11:21 Tuesday 27th October 2020 - 4 minute read

The hectic fixture schedule rolls on with the second round of group matches in the Champions League this week. There will be another two gameweeks before the dreaded international break, which lands in the middle of November.

Manchester City travel to Marseille on Tuesday evening and we’ve got three football tips for the game which kicks off at 20:00 and can be seen live on BT Sport. Pep Guardiola’s side beat Porto 3-1 at the Etihad in the first round of fixtures with Marseille winning 1-0 away at Olympiacos.

Sergio Aguero will miss the game after picking up a suspected hamstring injury against West Ham at the weekend. Gabriel Jesus is expected back in a week or two and which may mean Raheem Sterling has to play as a central striker. Kevin De Bruyne is back from injury and should start the game after getting game time against West Ham.

Having a look at the prices for the game and Manchester City have been made favourites, priced at a rather short looking 4/11 - an implied 73% chance of victory. The draw can be backed at 4/1 while the hosts are 8/1 for the win with most firms.

Marseille v Man City
Man City to win and both teams to score
19/10
City have more than enough quality in their squad to beat Marseille Pep Guardiola's side have conceded in 75% of their games this season
Odds correct as of 2020-10-27 10:45 Odds subject to change.

The first of my selections on Tuesday evening comes in the form of Manchester City to win the game and both teams to score. Both sides have had mediocre starts to the season and would have both liked to have been further up their domestic tables as we approach November.

At the time of writing Manchester City sit 13th in the Premier League table having only won two of their opening five games. The Cityzens have conceded in six of their eight fixtures in all competitions this season, which gives plenty of reason to believe Marseille can get on the scoresheet.

City do though have by far the stronger squad here. Even without Sergio Aguero and Gabriel Jesus, Pep’s side should still have enough firepower in front of goal with the attacking talent of Raheem Sterling, Kevin De Bruyne and Riyad Mahrez. William Hill have this selection of City to win and both teams to score priced at 6/4, so I’ll be taking the much bigger price of 19/10 that’s currently available on the Betfair Exchange.

Kevin De Bruyne 2+ shots on target
15/8
No player who has played three or more games for City this season averages higher for shots on target per game than KDB. Penalty and free-kick taker
Odds correct as of 2020-10-27 10:50 Odds subject to change.

The second selection of the evening comes from the shots on target market where I’m fancying Kevin De Bruyne to land two or more in the match, priced at 15/8. With no Sergio Aguero or Gabriel Jesus on Tuesday, I think there will be an added emphasis on both Kevin De Bruyne and Raheem Sterling to perform in the final third of the pitch.

Kevin De Bruyne scored 13 league goals last season and should be in the middle of an attacking three that plays just behind Raheem Sterling as a central striker against Marseille. Of all the players to play for City this season, none have recorded more shots on target than KDB. He’s averaging 1.3 per game so far this season and also takes penalties and free-kicks for his side. Skybet have this same selection priced at even money (1/1) so I’ll be taking the 15/8 available with Coral. 6/4 is also out there from Paddy Power.

Champions League Betting
Sterling 2+ shots on target, Rodri & Sakai to be carded
60/1
More emphasis on Sterling to find the goals with him playing as a central striker without Sergio Aguero & Gabriel Jesus Rodri has been booked twice this season already with no City player collecting more in the Premier League in 2019/20 Marseille defender Hiroki Sakai has been booked three times in eight games this season
Odds correct as of 2020-10-27 10:55 Odds subject to change.

Tuesday’s longshot currently pays 60/1 with Paddy Power or Betfair and I’ve opted for Raheem Sterling to have two or more shots on target, with both Rodri and Sakai to be carded.

As I mentioned above, Raheem Sterling most likely will be deployed as a central striker against Marseille. The added emphasis on him to provide the goals, gives plenty of appeal to the 13/10 available for Sterling to have two or more shots on target and he’s the first name into this Same Game Multi.

The second element that makes up this three-pronged punt is Manchester City’s Rodri to be carded. The Spaniard picked up eight Premier League and two Champions League bookings in 2019/20 and has already been cautioned twice this season.

Rounding off proceedings on Tuesday is Marseille’s Hiroki Sakai to be carded. The Japanese right-back has been booked three times in just eight games this season and I see him having a busy night against Manchester City.

Best of luck to those following the selections. Let’s hope for a better game than on Monday night at Turf Moor. Please gamble responsibly.

🔝 Kevin De Bruyne against Real Madrid at the Bernabéu...