Marcelo Gallardo: Everything you need to know about the revolutionary River Plate manager linked with Barcelona and Everton

The most successful manager in River Plate’s long and prestigious 118-year history, Marcelo Gallardo, has enjoyed just over five trophy-drenched years at the helm of Los Millonarios, yet rumours are rife that the Argentine show-stopper is contemplating a new managerial chapter in Europe.

Gallardo, a former playmaker, previously spent time in the continent as a player, where he helped Monaco win Ligue 1 plus a couple of domestic cups, and later lifted the French League Cup for a second time with PSG.

As a manager, he’s built up an impressive CV in South America at Nacional and River Plate, and his various successes mean it’s absolutely no surprise to see him linked with various European clubs.

The 43-year-old is currently the odds-on favourite to replace Marco Silva, should he suffer the sack at Everton, while he’s viewed as a future Barcelona boss, and is the 7/4 favourite to succeed Ernesto Valverde. While there also just so happens to be a job up for grabs at Arsenal, although he’s a 66/1 shot for the North London post.

Below we take a look at Gallardo’s managerial career to date, plus the likeliness of a switch to Europe in the near future...

He returned as manager in 2014, aged 38, two years after he’d got a taste for life in the managerial arena with Uruguayan side Nacional, where he lifted the league title in his one and only season.

Fast-forward to 2019 and he’s eclipsed predecessor Ramon Diaz as River Plate’s most successful manager, having accumulated 10 trophies - averaging two a season - including a couple of Copa Libertadores. The victory over hated rivals Boca Juniors arguably the pick of a juxebox of achievements.

He’s also remarkably been triumphant in 10 of the 13 finals he’s overseen, a tally that would have risen to 11 if it wasn’t for the heartbreaking last-gasp 2-1 defeat to Flamengo in last month’s Copa Libertadores final. 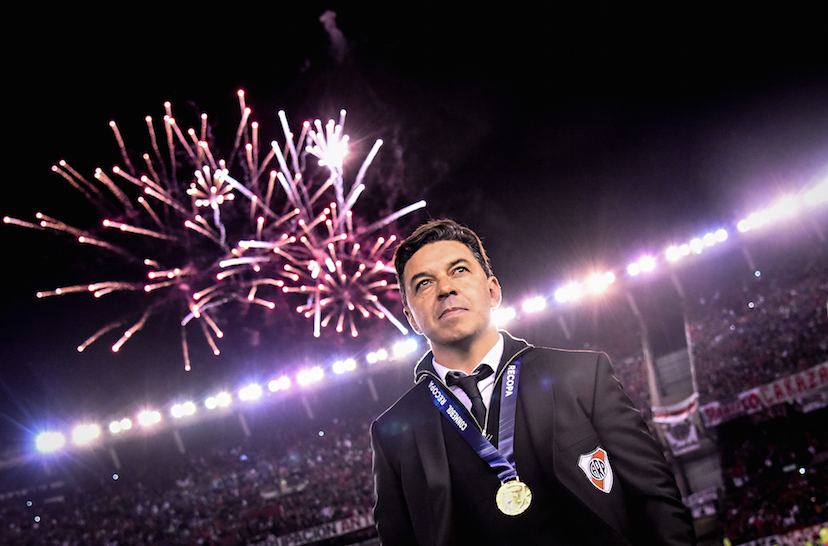 Marco Silva has been heavily criticised for Everton’s unadventurous and lethargic style of play. Goals have been hard to come by, they lack a cutting edge, and at times the Toffees are completely void of creativity and spark.

In stark contrast, Gallardo is famed for his attractive style of play, his tactical flexibility and fluidity, with a focus on possession, pressing and a rapid transition from defence through to attack.

He’s also known for his man-management skills, and ability to identify areas for improvement during matches, and in turn provide successful solutions.

Tifo describe River Plate’s midfield as one of ‘energy, creativity, neat interplay with an ability to fashion through balls for the forwards to run into’ - characteristics that certainly wouldn’t be applied to Everton’s equivalent this season.

For a more in-depth look at the tactical side of his managerial approach, check out this excellent Tifo video:

A disciple of Bielsa and praise from Pep

Like many of the current cluster of prominent managers - Pep Guardiola, Diego Simeone and Mauricio Pochettino to name a few - Gallardo has drawn inspiration from a certain Marcelo Bielsa, his former manager of the Argentina national team.

“Bielsa was one of the coaches who taught me the most,” Gallardo previously revealed, while the River Plate boss also has his own admirers, with Guardiola recently stating:

“What Gallardo has done at River Plate is incredible, I’m talking about his results. He gives the team all the consistency it needs year after year. Players leave but he remains there, with positive results.

“There are things that I can’t explain to myself, he is never part of the managers who are nominated for awards.

“It’s almost as if Europe was the only continent that matters for these ceremonies. I only wish that I can get to face his teams in the future, it would be beautiful to watch.”

With Leeds battling for promotion to the Premier League, who knows, England’s top-flight could well play host to Bielsa, Guardiola and Gallardo next season...

Going against the grain

Upon his arrival at River Plate, Gallardo made the decision to bolster his coaching set-up through the appointment of Sandra Rossi, who in the process became the first top-level female assistant coach in South American history.

Through neuroscience, Rossi enjoyed success in other sporting arenas such as volleyball and rugby union, and has since played a pivotal role in River Plate’s Golden Era under Gallardo.

“Rossi’s job is not just to “unlock” the brain but to help players manage certain situations and deal with their psychological wellbeing,” reported The Guardian in 2016.

Any gain he can get, Gallardo will look to implement.

River Plate boss, Marcelo Gallardo is now 8/11 to be the next Everton manager! 🇦🇷

Gallardo’s River Plate contract doesn’t expire until 2021, meaning compensation would have to be paid for his services.

In truth, a move right now appears unlikely given that his troops are currently preparing for yet another final - Argentine Cup against Central Cordoba - while they are two points adrift of top spot in the Argentine Superliga, with a game in hand. With nine matches remaining there’s all to play for in what promises to be an exciting climax to the regular season, which ends in March. Then there’s the Super League Cup to look forward to.

It’s difficult to envision Gallardo leaving his beloved River Plate before the conclusion of the league and cup campaign. However, while we may have to wait to see Gallardo in the Premier League, should at any point the Barcelona vacancy become available and should he subsequently be approached, he may well find the opportunity too good to turn down.