Mansfield vs. Port Vale Predictions: Stags to prance to victory at Wembley 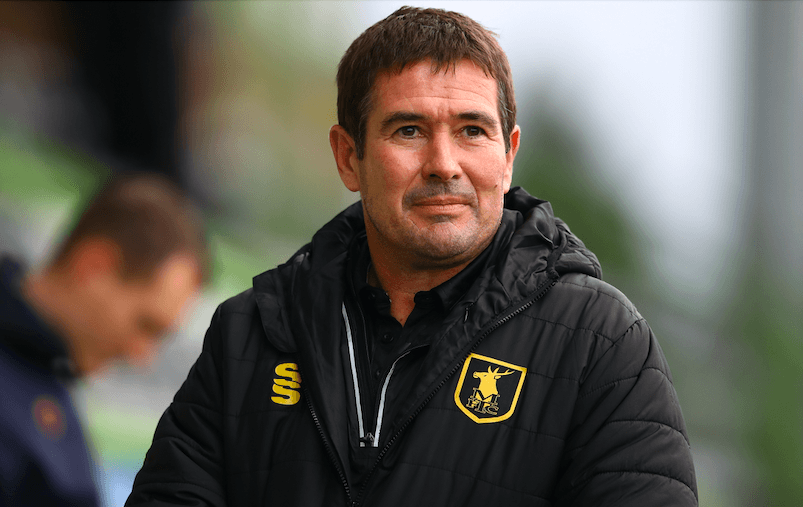 Mansfield vs. Port Vale: Nigel Clough is attempting to get Town back into League One for the first time since 2002
By Adam Roberts
12:44 Friday 27th May 2022 - 4 minute read

It's Champions League final day on Saturday but before that we've got the little matter of the League Two play-off final between Mansfield Town and Port Vale. We've asked our EFL egghead Adam Roberts to preview this one and provide us with his best bets for the final.

What a magnificent occasion it will be on Saturday at Wembley in a League Two final that will happen in front of over 30,000 fans. Both clubs have announced they have sold in excess of 15,000 tickets each, so neither side will have partisan support and the best team on the day, will likely be the victor.

Mansfield only sneaked into the final play-off spot on the last day of the season, yet enter this final in superb form, unbeaten in six and on the back of an impressive 3-1 aggregate win over Northampton Town in the semis. Manager Nigel Clough has a full squad to choose from and in interviews this week stated he will be using all his substitutes due to the warm conditions at Wembley and the size of the pitch. He may well opt to recall Matty Longstaff to start after missing out on the second leg at Northampton.

Port Vale pulled off a shock penalty win over Swindon Town in the semi's, having gone 2-1 down in the first leg. Darrell Clarke's men are not in great form, having won just two of their last six matches but will have new found confidence having knocked out one Town and will be aiming to do the same to Mansfield Town.

Both teams scored the exact same amount of goals in League Two this season and there isn't a great deal between them. Who will hold their nerve on the big day? Well lets try and break it down...

The bookmakers cannot split these two, Both teams are around the 7/4 mark, giving them a 35% chance of winning the game in the 90 minutes and the draw is as short as 2/1. Whilst I agree that the two teams are tough to split - they were just one point apart in the league after 46 games - I am just edging towards Mansfield to win on the day. In Rhys Oates and Jordan Bowery they have strikers in form, both scoring in the semi-finals and in the returning Matty Longstaff they have that x-factor that could be capable of a long range strike or unpicking the Vale lock for the strikers to score.

I would not be surprised if this one goes to extra time or even penalties and for that reason I'm taking Town to be promoted at just below evens (22/23).

Secondly, I'm combining a couple of player props into a bet-builder at William Hill which pays 10/1 at the time of writing.

First up, I've gone for Mansfield's right centre-back Oliver Hawkins to be carded. The 30-year-old Englishman started his career primarily as a forward but in recent years has converted into a defensive role and it's one he has thrived in this year for the Stags. Hawkins has lost none of his aggression in the role though, picking up 13 yellows in his 41 league starts this term. Up against the likes of James Wilson and Ryan Edmondson at Wembley, he is likely to be put under severe pressure and I wouldn't be surprised to see him in Jarred Gillett's book by the end of Saturday. The Premier League referee is averaging 3.44 yellows per game this season.

My next section is for the aforementioned James Wilson to have 2+ shots on target. The ex- Manchester United academy graduate has had an eclectic career since leaving Old Trafford. He's been on loan at the likes of Brighton, Derby, Sheff United and Aberdeen. His loan at the Dons turned into a permanent move and from there he moved to Salford City. Port Vale picked him up on a free after he was released by the Ammies and he has had an impressive first season for the Valiants, notching 11 goals. His output in recent weeks has been fantastic, scoring in his last three outings and having a colossal 16 shots in those matches.

The 26-year-old has had seven shots on target in his last three games and has cleared this line on ten occasions this season.