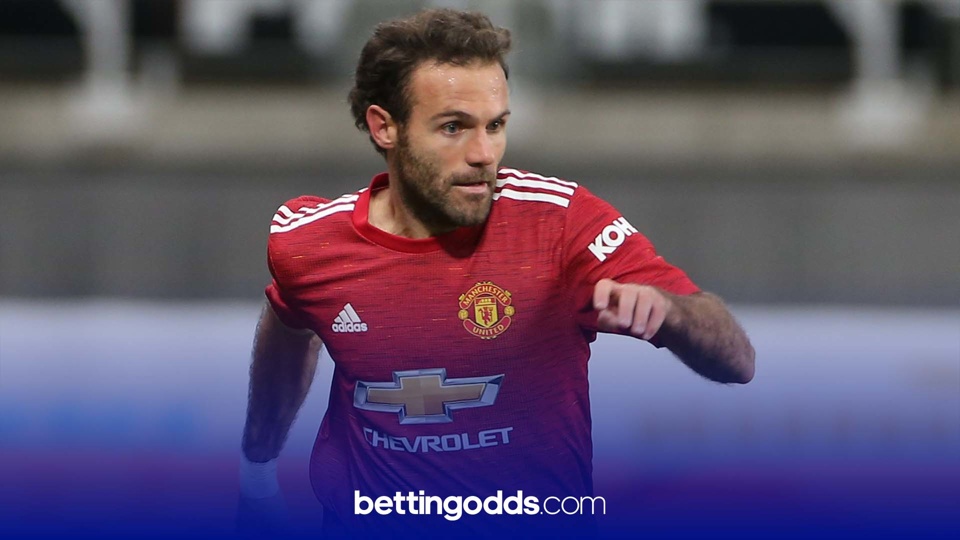 Juan Mata could potentially be on penalty and free-kick for Manchester United against Watford and features in our 13/10 selection for the game
By Anthony Eadson
11:49 Friday 8th January 2021 - 5 minute read

Manchester United face Watford at Old Trafford in the FA Cup third round at 8pm on Saturday evening. The game can be seen live on BT Sport 1, and we’ve got three football tips for the game as part of our offering on BettingOdds.com this weekend.

The last time the two sides met in February, United came out comfortable 3-0 winners, although Watford did manage a 2-0 victory against Ole Gunnar Solskjaer’s side last season at Vicarage Road, where goals from Troy Deeney and Ismaila Sarr gave the Hornets the three points.

Heavy rotation is expected from the home side with Dean Henderson the only player possibly to keep his place after the defeat against Manchester City in midweek. Mason Greenwood, Juan Mata and Donny van de Beek should all start the game.

Watford will be without Craig Cathcart, Christian Kabasele, Isaac Success and James Garner who is ineligible to face his parent club. Tom Cleverley should start in the centre of midfield against his former employers.

Unsurprisingly, Manchester United are the favourites with the bookmakers, given a 75% implied probability of getting the win, with odds of ⅓. The draw can be backed at 9/2 with a historic win for Watford which would be their first ever at Old Trafford, priced at 9/1.

Juan Mata hasn’t featured too much in the Premier League this season for Manchester United but has an impressive 0.81 shots on target per 90 minutes from his involvement so far this campaign. This gives plenty of appeal to the 13/10 offering from Betfair and Paddy Power for the Spaniard to land at least one shot on target.

It doesn’t stop there when it comes to making a case for Mata landing a shot between the sticks on Saturday. The 32-year-old has registered at least one shot on target in four of his seven starts this season. I also think with Bruno Fernandes being rested there’s a chance we could see Juan Mata on free-kick and penalty duty, which would only further our chances of this selection winning. Against Luton in the third round of the EFL cup this season Mata recorded three shots on target. He also scored and landed three shots on target in the FA Cup third round replay against Wolves at Old Trafford last season and scored a free-kick against Watford in 2017, which is hopefully a good omen for a man that has five shots on target in his last three appearances in this competition.

Andy Madley is the referee in charge of Saturday nights game, and although he is one of the shrewdest around when it comes to getting his cards out with just 2.5 yellows per game shown this season I fancy him to book one of Manchester United’s central defenders in Axel Tuanzebe.

At 11/1 this selection looks well overpriced in my opinion when you consider that Tuanzebe has been booked in all three of his starts for Ole Gunnar Solskjaer’s team this season! The 23-year-old has made a further six appearances off the substitutes bench and has picked up four yellows in total. Troy Deeney could be Tuanzebe’s direct opponent on Saturday and I feel the experienced Watford frontman will know about Tuanzebe’s disciplinary record and may try and play on this. It should be a good battle between the two, but with a 100% strike rate for being yellow carded when starting this season it’s hard to not think the 11/1 from Betfair and Paddy Power is huge.

I’ve also picked out a Same Game Multi with Paddy Power that pays 37/1, consisting of Donny van de Beek to have two or more shots on target, with Nathaniel Chalobah to be carded.

It’s been a rough start to life in Manchester for Donny van de Beek, who is desperate for a run of games and will feel hard done by after lacking gametime so far this campaign. He’s a player who no doubt has huge quality and I’m backing the Dutchman to put in a big performance against the Hornets and land two or more shots on target. The 23-year-old scored eight goals in 23 appearances in his final season with Ajax and has a point to prove to his manager this weekend.

I’ve double that selection up with Watford’s Nathaniel Chalobah to be carded. The central midfielder has been booked more times than any other member of his squad this season. With six yellows to his name in the Championship this term, the 26-year-old stands out as a prime candidate to find his way into the referees notebook at Old Trafford.

That’s 37/1 on the double with Paddy Power. Enjoy the FA Cup and let’s hope we can land a winner or two. As always, please gamble responsibly.