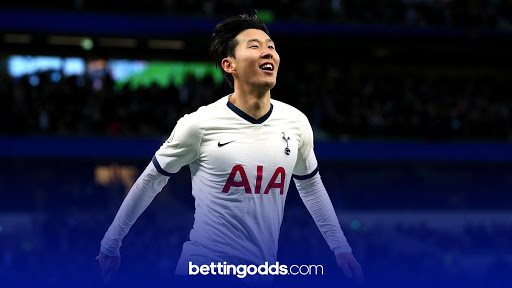 Son Heung-Min has registered at least one shot on target in nine of his last ten Premier League games and features in our tips for Saturday's clash
By Anthony Eadson
18:31 Thursday 11th February 2021 - 5 minute read

Tottenham were the last team to beat Manchester City in the Premier League at the back end of  November and the two face off at the Etihad Stadium on Saturday. Since then Pep Guardiola's side have kept 16 clean sheets and have won a remarkable 19 of their 22 fixtures including their last 15, a new record. Saturday’s game kicks off at 5:30pm live on Sky Sports Main Event and we’ve got three football tips for the game which we like the look of.

Spurs were not helped by having to play 120 minutes at Goodison Park on Wednesday evening and Jose Mourinho will be without Sergio Reguilon and Gionvani Lo Celso for his trip to Manchester. Gareth Bale and Serge Aurier are both a doubt with Eric Dier unlikely to start after his manager confirmed he is suffering from a lack of confidence.

Kevin De Bruyne and Nathan Ake are both confirmed absentees for City, although the condition of both Sergio Aguero and Ruben Dias is unknown with the pair doubtful to start the game.

After setting the new record for 15 wins on the bounce in all competitions, Manchester City are the 3/10 favourites to claim all three points on Sunday. The draw can be backed at 9/2, with Spurs the biggest price they have been all season at 17/2 for the win.

I was surprised to see Son Heung-Min open up at 10/11 for a shot on target with Betfair and Paddy Power and he has now been cut into 5/6 which I still believe is a backable price. It’s worth noting that at the time of writing 10/11 is still available with Coral for this same selection for those who can get on.

Son Heung-Min has 13 league goals for Tottenham this term and needs just one more to equal his biggest tally of 14 from back in 2016/2017. The Korean registered five shots against Everton on Wednesday, with two of those hitting the target in a thrilling 5-4 FA Cup tie that will long live in the memory. When it comes to the Premier League ‘Sonny’ has registered at least one shot on target in nine of his last ten games and I actually think he will be more of a goal threat than Harry Kane on Saturday with Son poised on the half-way line ready to catch City on the break with Kane playing a slightly deeper role.

The England International has been shown a yellow card in both the Premier League and Champions League this season. Sterling was also cautioned on five occasions from his 30 starts in the Premier League last season but the thing that has got me interested here is that he has actually been booked in three of his last four against Spurs. At 10/1 I feel this looks a little too big a price with Paddy Power going 7/2 and William Hill 4/1.

At 50/1 I’ve also opted to have a small dabble on a Same Game Multi from Betfair which consists of Harry Kane and Phil Foden to have a shot on target with Pierre-Emile Hojbjerg and Rodri to be carded.

Harry Kane came on as a substitute for Tottenham on Wednesday evening but still managed to let off 10 shots in the 68 minutes he was on the pitch. His goal scoring capabilities need no introduction and with Kane also being the penalty and free-kick taker with no Eric Dier in the starting line up, I’m happy to include him to have a shot on target considering he has landed 2+ in four of his last five appearances.

Phil Foden put in one of the performances of the season against Liverpool in the second half at Anfield last Sunday. The 20-year-old is now showing his ability week in week out and I think he will have a large part to play against Spurs, whether that be as a false-nine or cutting in from the right. Foden has landed at least one shot on target in four of his last five starts.

Moving onto the cards and the first player I’ve picked out for Spurs is battleaxe Pierre-Emile Hojbjerg. No other player has been booked more times for Tottenham in the league this season than the Danish midfielder with five to his name. Paul Tierney is the referee in charge who ranks second of 19 Premier League officials for yellow cards shown per game this term with an average of 3.71.

With this in mind there’s plenty of belief that we should see a good few bookings on Saturday and for Manchester City I’m leaning towards Rodri. The Spaniard picked up eight league yellow cards in 2019/2020 and has three to his name this campaign. Averaging over a foul per game, I’m hoping Rodri can produce one of his cynical counter-attack stopping fouls that leads to a yellow card.

That’s three bets in total for the game at prices of 5/6, 10/1 and 50/1, best of luck to any following, let’s hope for a good game and please always gamble responsibly.