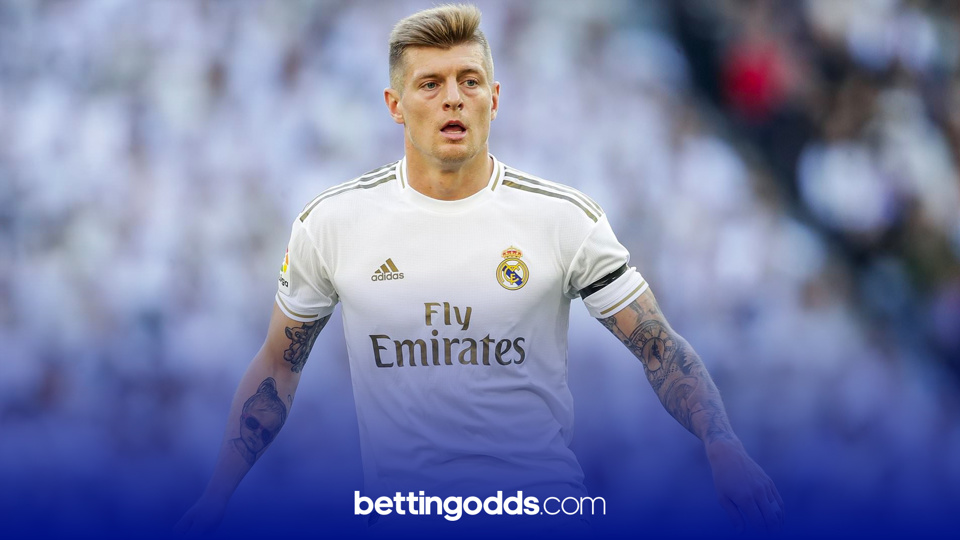 Only Karim Benzema and have scored more goals than Toni Kroos for Real this season
By Anthony Eadson
17:09 Thursday 6th August 2020 - 5 minute read

Besides being able to grab £10 off your restaurant bill this month there’s also the serious benefit of Champions League football returning to our screens this weekend! Friday night sees Real Madrid travel to the Etihad to face Pep Guardiola’s Manchester City in what looks like a mouth watering dish.

The hosts came from behind in the first leg to steal a 2-1 victory at the Bernabeu in February thanks to goals from Gabriel Jesus and Kevin De Bruyne. City are currently the joint favourites to win the tournament at the head of the UCL winner market with Bayern Munich, both priced at 10/3 with Betfred.

Sergio Ramos is suspended following his red card in the first leg but will reportedly still travel with the squad and will be in the dressing room. Neither Gareth Bale or James Rodriguez will travel to England for this one and both currently find themselves on the transfer list.

For City, Benjamin Mendy will miss out due to suspension which should see Oleksandr Zinchenko come in at left back. Sergio Aguero also remains sidelined due to a knee injury, with new signings Ferran Torres and Nathan Ake both ineligible.

Having a look at the match prices and Pep’s side are the 8/11 favourites to win in 90 minutes with the draw priced at 16/5. A win for Los Blancos at the time of writing can be backed at 7/2 with Betfred which does look a rather generous price at first glance. The game can be seen live on BT Sport at 7:45pm and I’ve picked out three football tips that I like the look of for this one.

Manchester City v Real Madrid Tip #1
Toni Kroos to have 1 or more shots on target
1.6/1
Averaged more shots per game than Eden Hazard and Vinicius Junior this season Real need to win and could apply shoot on sight tactics
Odds correct as of 2020-08-06 17:05 Odds subject to change.

First up I’m backing Real Madrid’s Toni Kroos to have one or more shots on target at 8/5 with Paddy Power. Surprisingly, only Karim Benzema and Sergio Ramos have scored more goals than Kroos for Real Madrid this season. One of the most consistent performers of recent years Kroos, now 30, will be looking to secure his fifth Champions League title this month.

When it comes to shots per game, the German has averaged more than both Eden Hazard and Vinicious Junior this campaign. Only Benzema and Bale have taken more shots per game this season than Kroos, who is averaging 1.6 per 90 mins. With Madrid needing to win here to progress I fancy them to throw everything at City and hopefully Toni can be a part of the bombardment they will put on Ederson’s goal. At the moment this one is priced at 8/5 with both Betfair and Paddy Power which I'll be having a dabble on come Friday evening.

Next up I’m opting for a correct score of 2-2, at the price of 12/1 with bet365. After some fairly lacklustre games to end the Premier League season I can’t wait for the return of Champions League football and matches that provide high quality drama. You only need to cast your minds back to last season’s knockout phase and those comebacks from Liverpool and Spurs to remind yourself of how good this tournament can be.

I’m expecting goals in this game and with over 2.5 goals priced at just 1/2, I’ve decided to try and snaffle a bit of a bigger price with the correct score of 2-2. There’s been over 2.5 goals scored in 37 of Real Madrid’s last 41 Champions League games and with them needing to turn over a first leg deficit, I see them scoring.

Further to this, Manchester CIty have scored at least two goals in 13 of their last 16 Champions League fixtures and are undefeated in their last eight. Madrid won 10 of their 11 final games in La Liga and I think they will provide a stiff test for City with the result at full time hopefully being a stalemate. All things considered, 2-2 looks a logical play here which can be backed at 12/1 with bet365.

Manchester City v Real Madrid Tip #3
Sterling & Benzema 1+ shot on target, Casemiro & Rodri to be carded
22/1
Sterling averages 2.9 shots per game this season Benzema has 26 goals in all competitions this season and should be Real's biggest threat Casemiro has been booked 12 times in La Liga this season No other City player has been carded more than Rodri this season
Odds correct as of 2020-08-06 17:05 Odds subject to change.

Onto the longshot for this one and at 22/1 I’m going for Raheem Sterling and Karim Benzema to have one or more shots on target, with both Casemiro and Rodri to be carded.

It’s been another superb season for Raheem Sterling with 29 goals in all formats, including five in this season’s Champions League. He averages 2.9 shots per game in the competition this season and looks primed to play a big role here on Friday.

Next up in this Same Game Multi to land a shot on target is Real Madrid’s Karim Benzema. He’s been one of the shining lights for Zidane’s side this season, contributing 26 goals in all competitions. He’s the main threat in front of goal for Madrid and the one player I’d want onside more than any other in the shots market.

Onto the cards and my first selection is Los Blanco’s Casemiro. He’s been booked an impressive 12 times in La Liga this season, more than any other Madrid player. The Brazilian also tops the charts for Madrid when it comes to fouls. He racked up 87 fouls in the league and 35 more tackles than any other player this season, with Ramos second on this list with 52.

Rounding this one off is Rodri to be carded for Manchester City. He’s also the most carded player this season for his club, picking up 11 in all competitions. The Spaniard is one who doesn’t mind a cynical foul and will break up play when called up on.

As always, enjoy the game, and please remember to always gamble responsibly.

Any range is shooting range when you're Toni Kroos 😍