Manchester City placed one hand on the Premier League trophy on Sunday evening after thrashing Liverpool 4-1 on Merseyside. Phil Foden put in a Man of the Match performance for Pep Guardiola’s side, who are now priced at just 1/16 with most bookmakers to claim another league title, with Paddy Power even paying out on the Sky Blues winning the league already.

Sunday was the first time that Manchester City have won at Anfield since 2003, although they were helped by a couple of mistakes by Liverpool goalkeeper Alisson which manager Jurgen Klopp later suggested could have been down to his shot-stopper having cold feet.

The Cityzens are currently still involved in four tournaments this season: The Premier League, FA Cup, EFL Cup and Champions League. It may only be the start of February but after putting together a record-equalling 14 consecutive victories in all competitions many City fans will be hopeful of collecting numerous pieces of silverware this term. Here at BettingOdds.com we’ve taken a look at their prices to win multiple trophies this campaign.

With just two league defeats to their name this term, Manchester City are now five points clear at the top of the Premier League table with a game in-hand on second placed Manchester United. With ten league wins in a row and an unbeaten run of 14 that stretches back to November, it’s hard to see anyone catch City, especially when you consider that they have conceded just 3 goals in those 14 games.

Swansea are the side on the agenda for City in the FA Cup with the Sky Blues making the trip to Wales to take on Steve Cooper’s side this Wednesday. It’s hard not to see City going deep into England’s most famous cup competition, although this has not been their most successful tournament over recent times, lifting the trophy in one of the last nine renewals.

In contrast the League Cup has been meat and drink for City over recent years. Incredibly, they have won five of the last seven runnings, including the last three! It’s a competition where they have thrived in the past and have already secured a place in the season’s final, which will take place in April against Jose Mourinho’s Tottenham. Priced at 2/5 to make it four in a row, it’s hard to make a case against City not beating Spurs, who have looked a little flat since the Christmas period.

The one trophy that has eluded Pep Guardiola at Manchester City is the Champions League. A previous winner of the tournament as both a player and a manager, this competition means a lot to Pep and he will still be scratching his head as to what exactly happened in the 3-1 quarter-final defeat against Lyon last summer.

Borussia Monchengladbach are the side who City have been drawn against in the Champions League round of sixteen with the first leg being played February 24th. Bayern Munich are the only other side currently priced shorter than Manchester City in the Champions League Winner market with Pep’s former employers the 11/4 favourites while City follow close behind at 7/2, an implied 22% chance offered by the bookies.

With two league titles, one FA Cup and three League Cups to his name since making the switch to Manchester it’s hard to see Pep Guardiola failing to pick up any silverware this season considering their current positions in various formats. However, there is 50/1 available with Paddy Power for the brave souls who foresee a City collapse in the second half of the season. We’ve listed all prices for the various trophy multiples below. 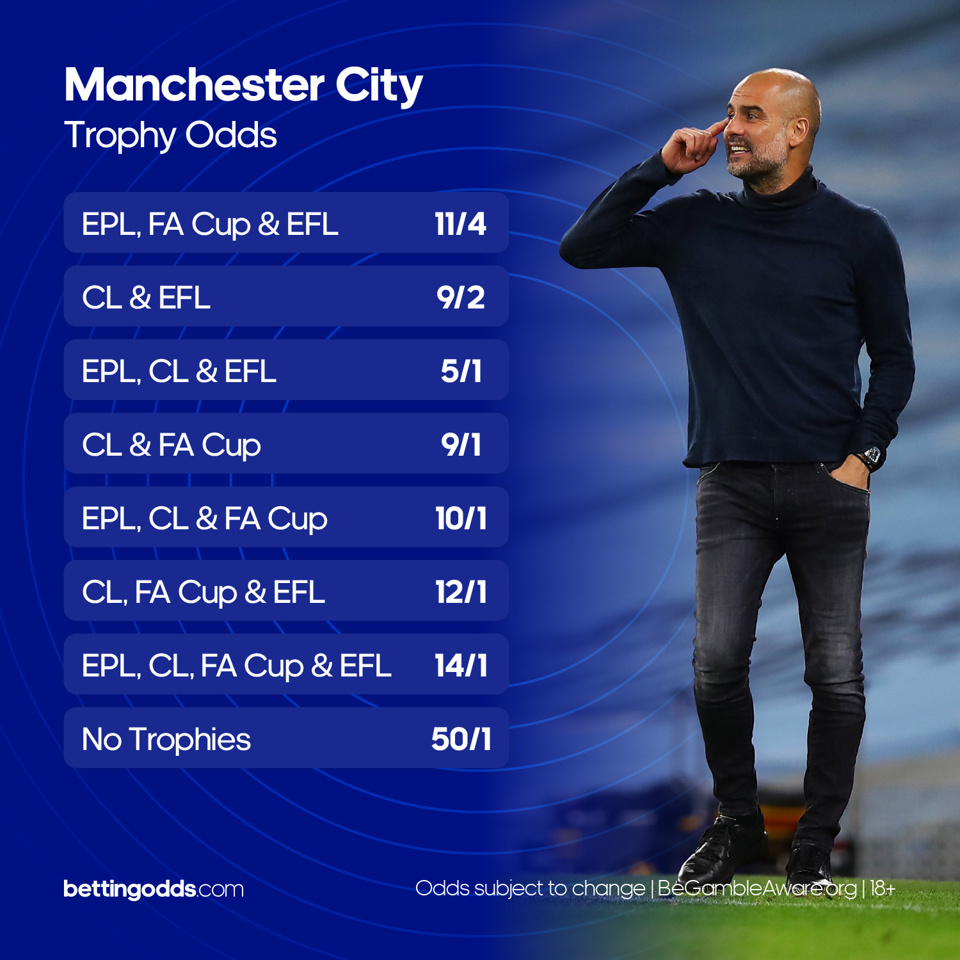 Lack of cutting edge from the spot could cost them

Manchester City’s 4-1 victory over Liverpool came despite a missed penalty in the first half by Ilkay Gundogan, who has scored three more goals than any other Premier League player since December 15. The German’s penalty went well over the crossbar, with four of the last six Premier League penalties that have completely missed the target having been taken by City - a very worrying statistic.

In total since the start of the 2019/2020 season, City have been awarded 23 penalties in all competitions but have only converted 14 of those (61%). One positive, however, is that in the next few weeks both Sergio Aguero and Kevin De Bruyne should return from injury. Both potential penalty takers, the pair have the best penalty conversion rate at the club over recent years in comparison to the likes of Ilkay Gundogan, Gabriel Jesus and Raheem Sterling.

Pep Guardiola has even gone as far to mention that he may think about Ederson being a penalty taker in the future, with the goalkeeper priced at 5/1 to score this season. Penalty shoot-outs could well decide City's fate in knockout competitions this term and based on the last two seasons you would not be rushing to back them to win courtesy of this method.

In our opinion the Champions League could be a step too far this campaign with last season’s champions Bayern Munich still looking like the team to beat. The 11/4 available for City to complete a domestic treble looks a more appealing selection after their major statement against Liverpool on Sunday.