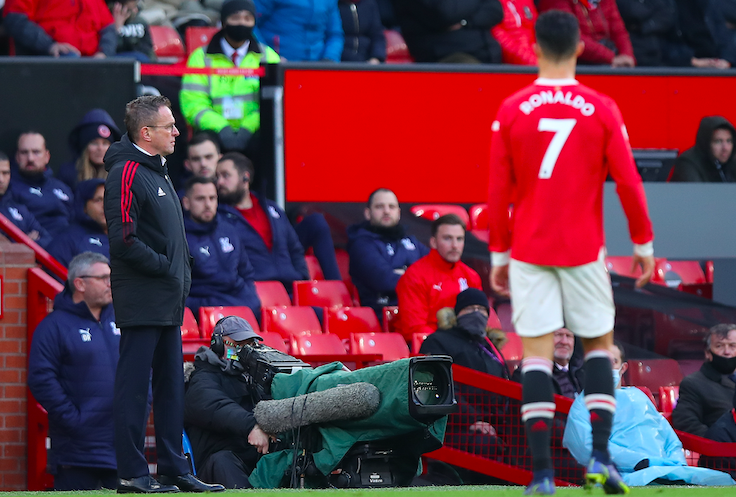 Can Rangnick and Ronaldo get back to winning ways?
By Dean Woodward
19:12 Friday 11th February 2022 - 4 minute read

Premier League football gets underway Saturday afternoon with a 12:30 kick off between Man Utd and Southampton, live on BT Sport.

Two points dropped in midweek for the Red Devils as they could only manage a draw against struggling Burnley. A game where they registered twenty-two shots and 64% possession but just couldn’t find a way to leave Turf Moor victorious. Manchester United now slip down to 6th in the table after Arsenal's 1-0 win on Thursday against Wolves, with United now only picking up eight points from a possible fifteen as the race for European football becomes tense.

Its still unknown if Telles and Fred have recovered in time from Covid-19 and whether they will feature here. Pogba with a sublime finish against Burnley and seems to have had a positive impact on the side since his return, albeit the results not going United's way, he is likely to keep his spot on Saturday.

A turn of fortunes in the Saints camp, a thrilling 3-2 victory over Spurs on Thursday sees them in the top half of the Premier League table. Hasenhuttl's side have now won three and drew two of their last six in the Premier League, with victories over West Ham, Brentford, Spurs, and a 1-1 draw with Man City. Djenepo returned to the bench following his return from AFCON and could feature from the bench, both Redmond and Tella will remain sidelined due to injury.

An angle that I keep banging the drum on is Man Utd tackles. If it isn’t broken, why fix it? As I always mention when playing Man Utd tackles, the numbers have increased significantly since Ralph Rangnick took charge at Old Trafford. Since his first game in charge against Crystal Palace, Man Utd have averaged 17.75 tackles per game, clearing this 14.5 line nine times from his twelve matches. The line is set at 16.5 which is much closer to the average numbers, however tackles against Southampton have been extremely high recently – Spurs, Man City and Wolves all managing nineteen or more in Southamptons last three Premier League matches!

Some solid performances recently for Manchester United but struggling to come out victorious against both Burnley and Middlesbrough in their last two matches. Both of these matches have seen the Red Devils register over twenty shots comfortably, with a very high eighteen shot count against West Ham in the match before. The beauty of the bet builder is being able to take lower lines that already look value and building a lovely double that has been cleared together in eight of Rangnick's twelve matches.

For my second selection I like the look of this 14/1 long-shot. An entertaining game at Old Trafford is expected and potential for lots of goals and cards. Stuart Attwell takes charge here and he's brandished five or more cards in 41% of games!

With a combination of Man Utd's high shot count recently and Southampton scoring and leaking goals left, right and centre, it wouldn’t surprise me to see goals going in at both ends here. Southampton games have seen both teams score in all of their last nine, with the corners also landing in seven of those. This long-shot is coming in around 10/1 or less with most other books, worthy of some loose change for those who want a more extravagant selection.