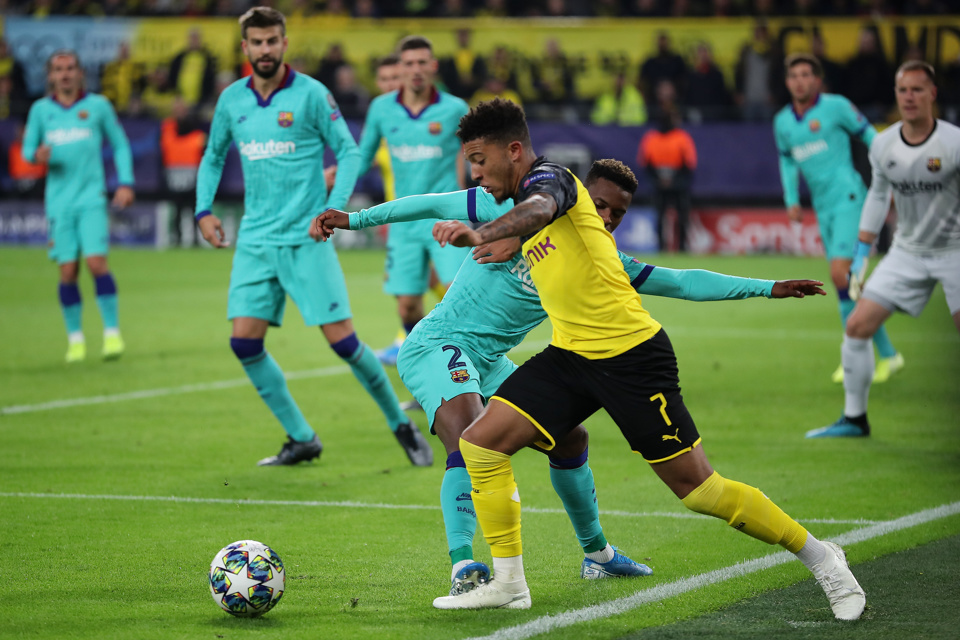 Manchester United's odds to sign Borussia Dortmund starlet Jadon Sancho have been cut into as short as 2/1 with some bookmakers.

The Red Devils have been frontrunners to capture Sancho's coveted signature for months, but have never found themselves as short as they are now to prize him away from Signal Iduna Park.

The England international has been a revelation since joining Dortmund from Manchester City in 2017, contributing 31 goals and 42 assists in just 90 appearances for the Bundesliga giants. He is now deemed to be one of the most sought after young talents in world football, with a host of top-flight clubs reportedly vying for his services.

Chelsea and Liverpool have both been credited with firm interest in recent months, while Real Madrid have also been linked with the 20-year-old after witnessing his scintillating displays for Dortmund this term (17 goals & 19 assists in 35 games - all competitions).

La Liga titans Barcelona are currently third-favourites to sign Sancho at odds of 9/1 - behind both Chelsea (4/1) and United (2/1) - while Serie A leaders Juventus follow closely behind at odds of 10/1. Paris Saint-Germain and Tottenham make up the rest of the six favourites, priced at 16/1 and 20/1 respectively.

Indeed, it is United who remain at the forefront of potential negotiations. The 20-time English champions are one of the few clubs in the world who have the financial capabilities to be able to complete a deal for Sancho, with Dortmund valuing their prized asset at £120m.

The Englishman would command a weekly wage of around £200,000-a-week at whichever club he does join in the summer, which rules a number of clubs out of the running for his signature.

Man Utd have been in contact with Jadon Sancho's agent for two months and are working on his contract. The coronavirus pandemic is making it hard to communicate with Borussia Dortmund 🇾🇪

The biggest stumbling block from United's standpoint is if they fail to obtain Champions League football next season. Ole Gunnar Solskjaer's side are currently fifth in the Premier League and just three points behind Chelsea in fourth, so have a fantastic chance of breaking into the top-four when football is able to resume.

However, should they miss out on that target - thus failing to qualify for next season's Champions League - then a move for the Dortmund star would more or less be off the table.

A player of Sancho's quality needs to be playing in Europe's most elite club competition season after season; if United cannot instantly offer that, then he may have to look elsewhere and options are the one thing he will not be short of.

If a move to Old Trafford does come to fruition, though, it would certainly come as a blow to bitter rivals Manchester City, the club who nurtured Sancho through their academy system between the years of 2015-2017.

If not United, then where?

Currently, it does seem as though Sancho's future lies in the north west of England with Manchester United, but that could all change in the coming months. So, if a move to Old Trafford is ruled out because the Red Devils fall flat in their quest to obtain Champions League football, then where does that leave the 20-year-old?

4/1-priced Chelsea are currently second-favourites to land Sancho in the summer, which doesn't seem a bad bet when you consider the west London club's infrastructure under Frank Lampard.

There has been a complete shift in outlook at Stamford Bridge during the last 12 months, largely thanks to Chelsea's recent transfer restrictions. The Blues have placed more emphasis on homegrown, young British talent this season, with the likes of Reece James, Tammy Abraham, Mason Mount and Fikayo Tomori all being handed regular first-team opportunities and impressing.

Sancho fits the modernised Chelsea mould perfectly, and would no doubt slot in effortlessly at SW6 if he were to pen a deal with the club in the summer. He is also a boyhood Chelsea fan having grown up in south London -  another thing which could prove to help the Blues in their quest to sign the youngster before 1 September.