Man City vs. Real Madrid Stats: All the data you need for your Champions League bets 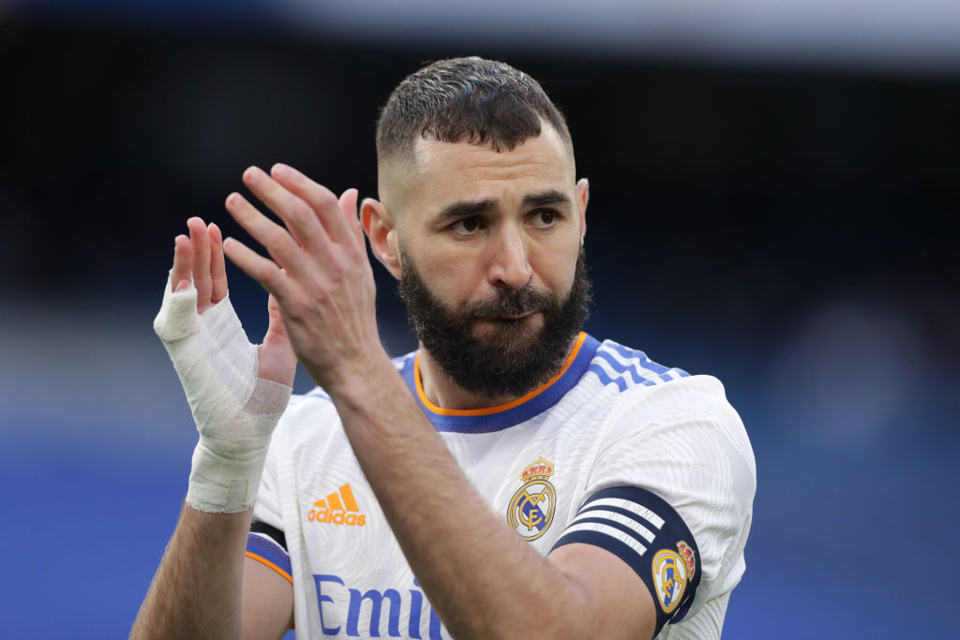 The Champions League semi-finals begin on Tuesday and Wednesday with the first leg ties . First up is Manchester City against European giants Real Madrid . We will have a full match preview and best bets on the site from our regular tipsters, but we've also asked our statman @OddsT3rrier to take a deep dive into the recent history between the two sides, and look into this season's stats to see if there are any angles which you can use to your betting advantage. He's also priced up a bet builder for you with Paddy Power which has been boosted to 16/1.

We're into the big leagues here and a clash between two of Europe's biggest clubs for a place in the Champions League final. Remarkably these two teams have only faced each other six times previously, with the honours even (2 wins, 2 draws, 2 losses). They last played each other back in 19/20 with City winning both games by the same 2-1 scoreline to progress. Gabriel Jesus scored in both legs. 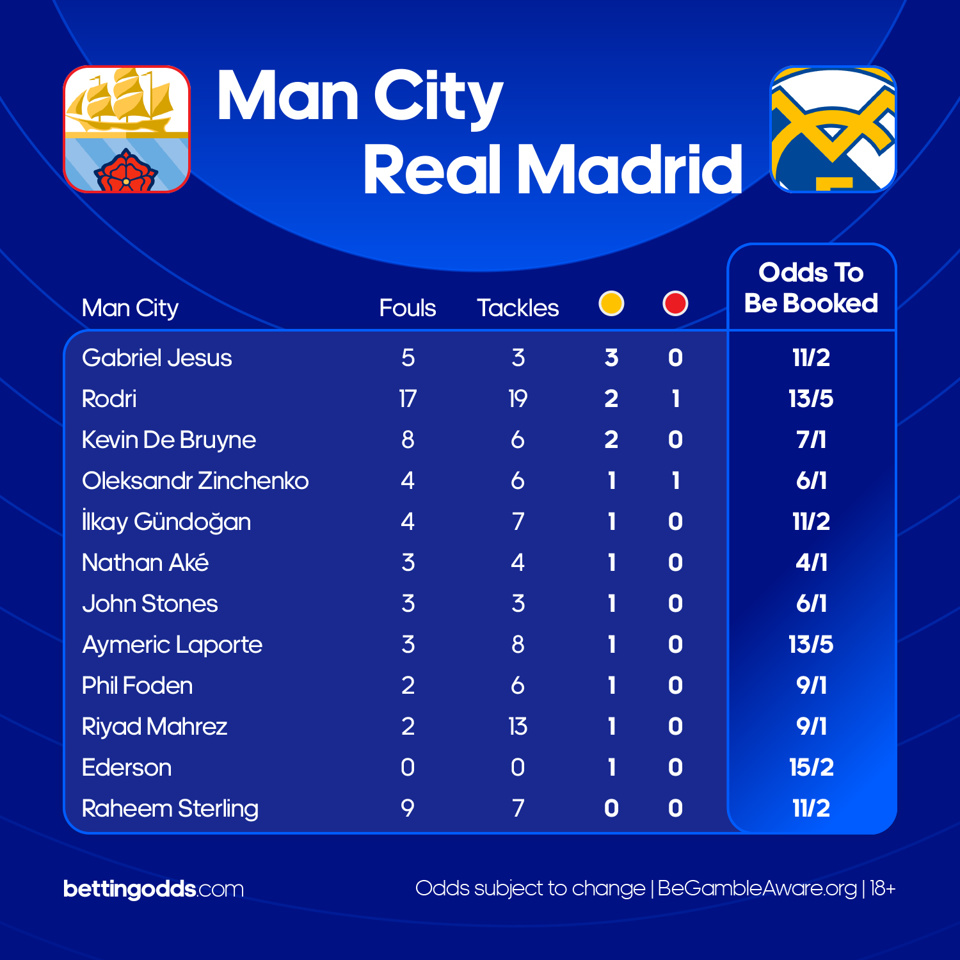 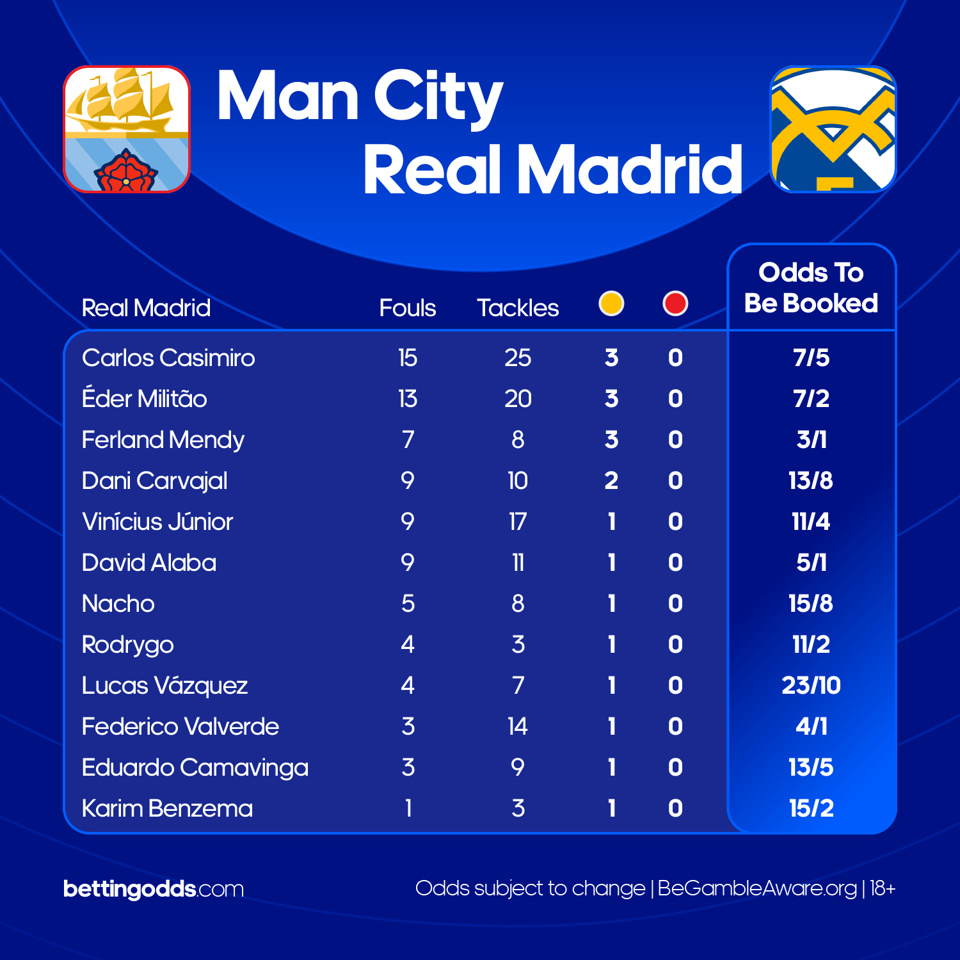 The obvious thing to take from the card stats is that the Real Madrid players in the main are far shorter priced to see a yellow. That is fairly obvious with them being away from home but they are actually fairly close in terms of cautions in the Champions League (City 18, Madrid 20).

One man who stands out to me to be carded is Ferland Mendy. The Real Madrid left back is likely going to be up against the extremely tricky Riyad Mahrez. He has already picked up three yellow cards in the competition from just seven fouls so when he does commit a foul, its generally a bad one. At 3/1 (Paddy Power) he looks good value.

For City, Gabriel Jesus definitely stands out. He is full of confidence after scoring four at the weekend versus Watford but is always on the knife edge when it comes to discipline. He has picked up three cautions this season in the UCL - all three coming in the last three outings. He's best priced 11/2 at Unibet to see a fourth straight yellow here. 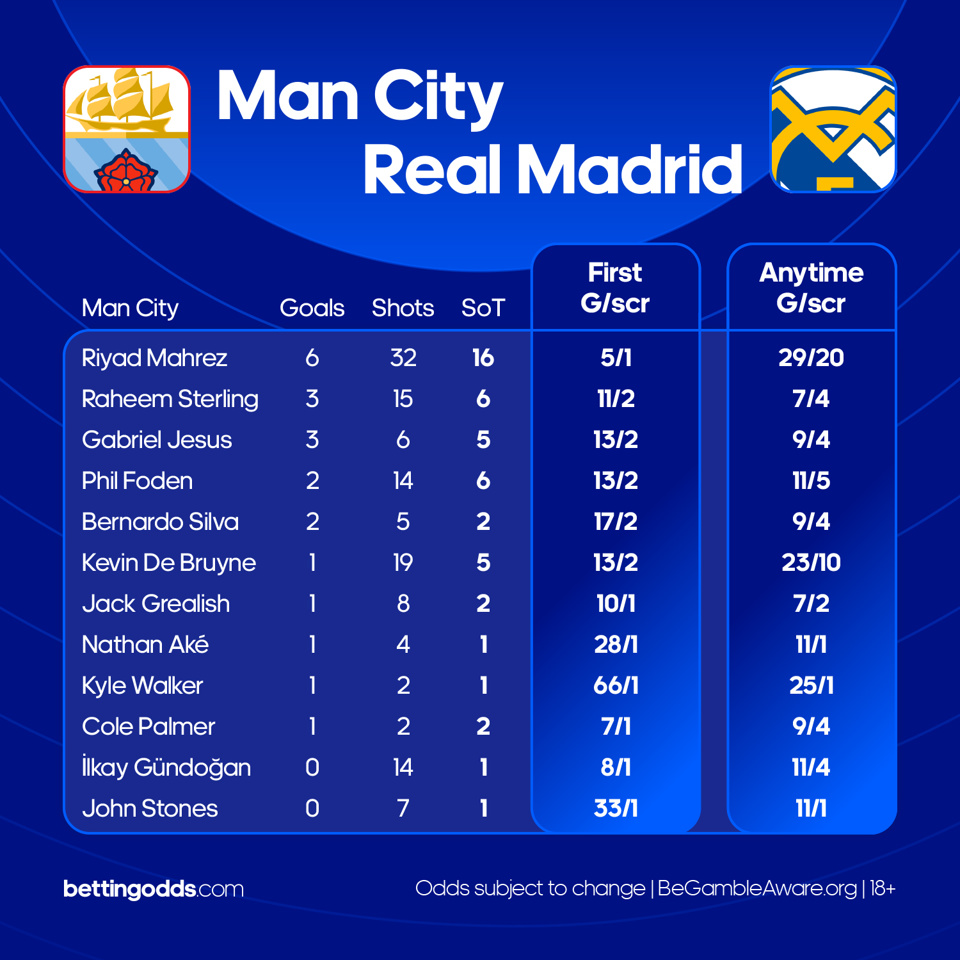 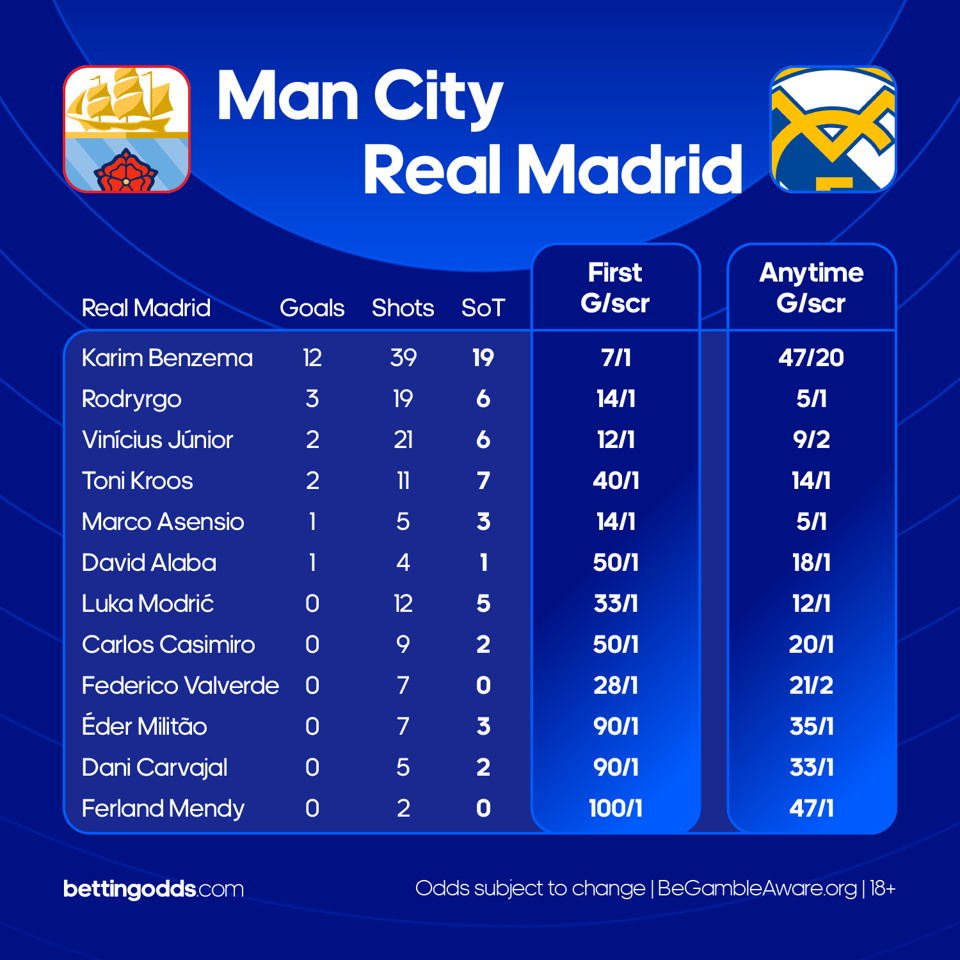 In terms of shots and goals one man stands head and shoulders above the rest. The towering colossus that is Karim Benzema. The 34-year-old is having a staggering campaign, notching 46 goals this season in all competitions. In the Champions League he has scored 12 goals in just nine games, including seven in his last three and two hat tricks on the spin. You can find Benzema at a generous 7/1 to score first and 47/20 to score at any time in the 90 minutes. He's also a very attractive 1/2 to have a shot on target and 12/5 to have 2+ SoT (both at Paddy Power). He has managed 19 shots on target this Champions League campaign already.

If you are looking for value on the City side of things, you could do worse than take Mahrez 2+ SoT at 6/4 (Betfred). Kevin de Bruyne is just slightly longer at 15/8.

We've stuck a few of our favourite selections into a bet builder for you with a direct link below. This has been boosted to 16/1 by the good people at Paddy Power.

Ferland Mendy to be carded, Karim Benzema 1+ SoT, Riyad Mahrez 2+ SoT
16/1
Odds correct as of 2022-04-26 10:25 Odds subject to change.
Opt-in
Sign up for market leading stats and exclusive expert picks delivered to your inbox from next season
Click to sign up to receive tips
By clicking opt-in you agree to our privacy policy and terms and conditions below
Opt-in
Your Details
Complete your details below to enter:
Full Name
Email
SUBMIT
Please fill in both your name and email
Opt-in
SUCCESS!
Thank you for your submission.