Man City vs. Liverpool Stats: All the data and insight you need for your Bet Builders 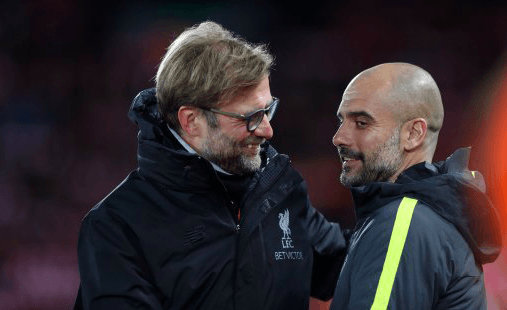 It’s the biggest game of the season so far in the Premier League on Sunday as Manchester City take on Liverpool at the Etihad and we’ve taken a look at some of the key stats and prices available from the bookmakers.

After 30 games played, just one point separates Pep Guardiola and Jurgen Klopp’s teams heading into this huge match, with the winners having the perfect platform to go on to lift the trophy in May.

As things stands, the bookmakers have Manchester City as the favourites to win the league at 4/9, and they also make them favourites to claim all three points on Sunday, priced at 21/20.

Liverpool are currently on a run of ten straight wins in the league and can be backed at a best-price of 14/5 to make that 11 in a row on Sunday. After only being able to celebrate their 2020 title behind closed doors due to Covid, the Redmen would love to once again lift that Premier League trophy. Before a ball is kicked this weekend they are being offered at 13/8 in the outright winner market.

First up we’ve taken a look at Manchester City’s top ranked players when it comes to goals and shots this season. Three players lead the way with ten Premier League goals to their name, in Riyad Mahrez, Raheem Sterling and Kevin De Bruyne. The latter in particular has been in excellent form of late scoring five goals in his last five appearances in all competitions.

With the Belgian more likely to feature for the full 90 minutes than some of his counterparts in attack, he does stand out as a player you would like to be behind in the goal and shot markets. At the time of writing, 11/4 is on show for KDB to make it six goals in his last six with Betfair. When it comes to shots on target, De Bruyne has landed 2+ between the posts in three of his last four and again Betfair look to have the best price available at 15/8. 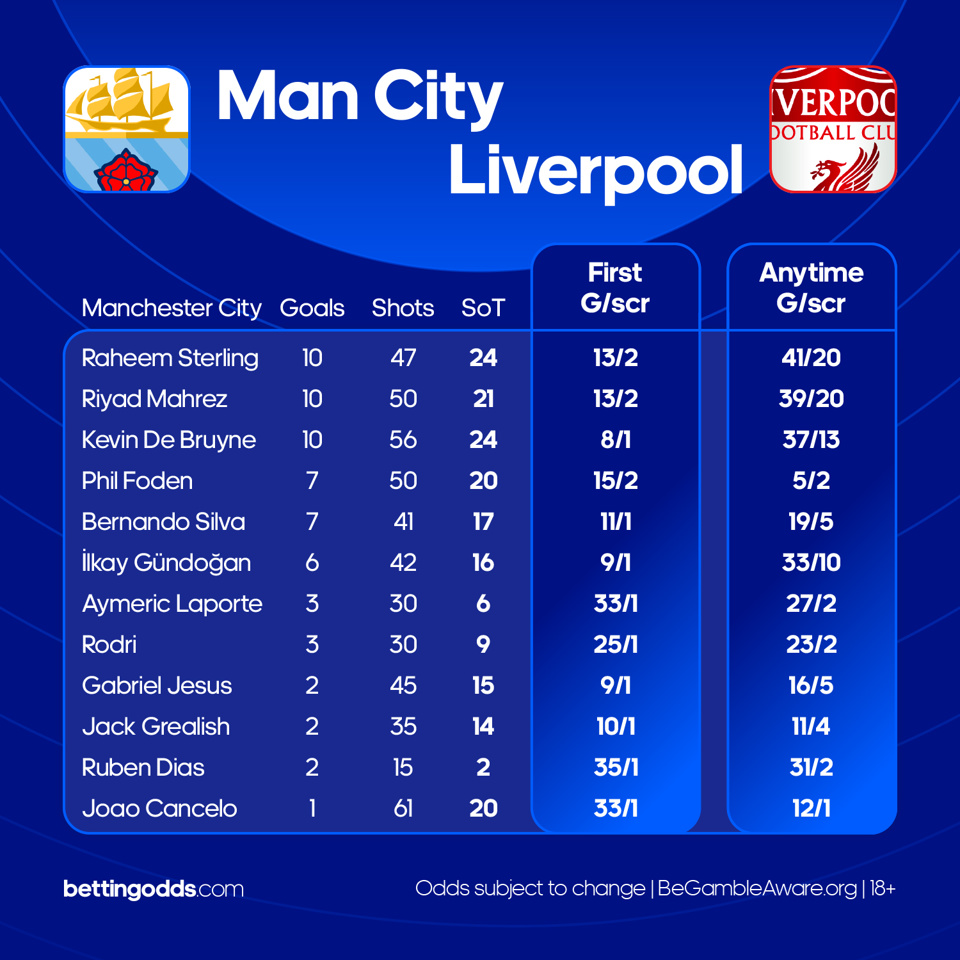 Mo Salah has been exceptional this season with 20 goals and 10 assists to his name, making it easy to see why he’s the favourite to be crowned the PFA Player of the Year. The Egyptian has started 26 Premier League matches this season and has scored in 16 of those. 7/4 is available with several firms for him to find the net anytime in the match with a 5/2 boost available from Sky Bet (£10 max).

When it comes to shots on target this season, Salah is head and shoulders above the rest of the league. The 29-year-old has registered 54 shots on target at an average of 1.93 per game. That’s 13 more than his closest rival in this metric, Harry Kane with 41. Bet365 have 7/4 on show for Salah to have over 1.5 shots on target against City on Sunday which implies a 36% chance of landing.

Looking back through the data this campaign and this selection of over 1.5 shots on target has actually landed in 18 of his 26 starts (66%), with 10/3 available on him to score and hit the target twice courtesy of the Betfair Bet Builder feature 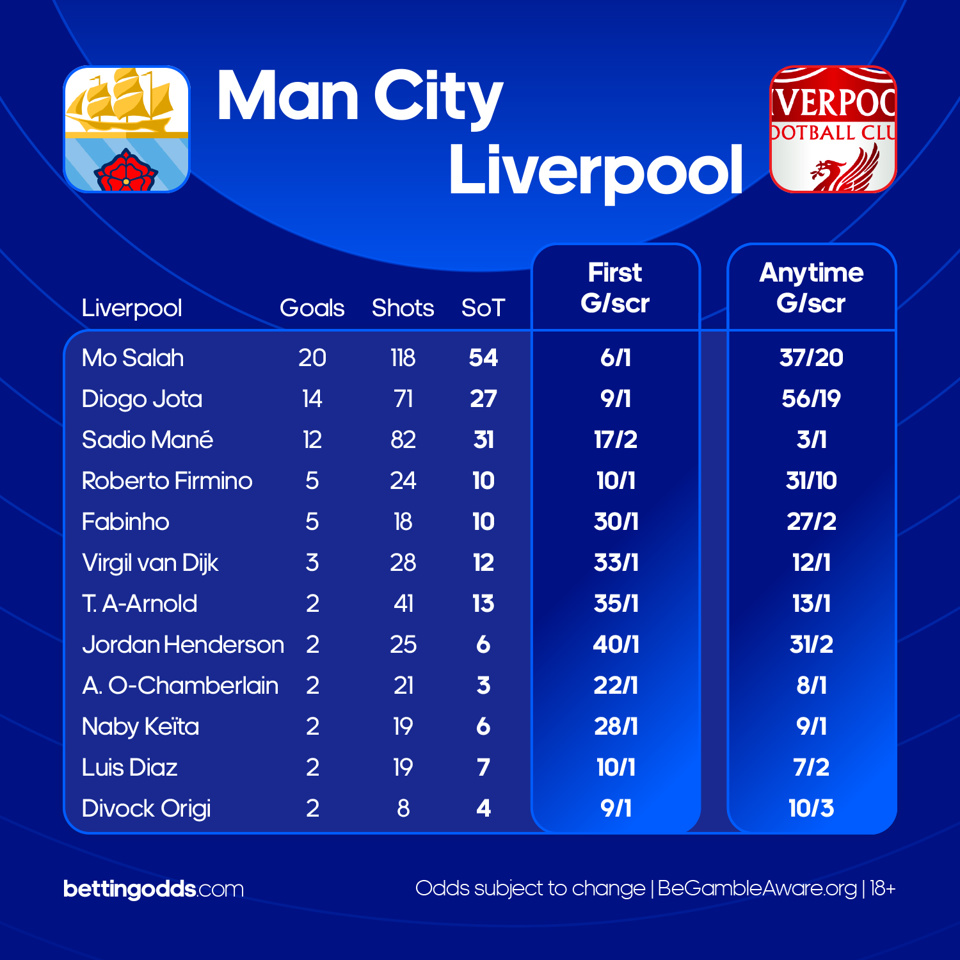 Manchester City and Liverpool have the best disciplinary records in the division this season, picking up just 71 yellow cards between them - Leeds have the most with 91. Five City players top the yellow card charts in east Manchester with five to their name this season: Joao Cancelo, Duben Dias, Aymeric Laporte, Rodri and Bernardo Silva.

Of those five, Rodri is averaging the most fouls per game (1.4), but having a look at the prices available and it’s Bernardo Silva who makes some appeal at 7/2 given that the other four are priced at 21/10 or shorter.

One other player who is worth some consideration here is Kyle Walker. The right-back may have only been shown one yellow card this season but he has been booked in two of the last three matches he has played in against Liverpool. Furthermore, against no other club has Walker picked up more bookings in his career than Liverpool with five. He can be found at 15/4 to collect a card on Sunday. 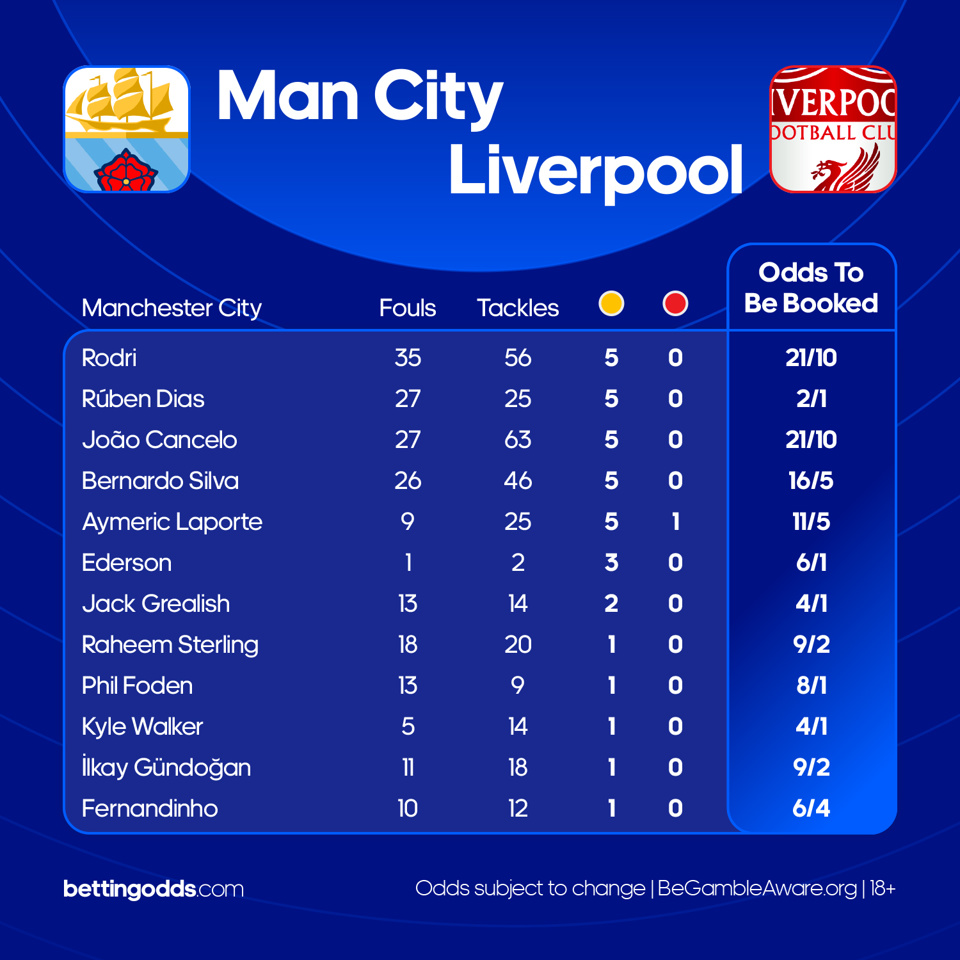 Anthony Taylor will be the referee in charge of the match. The official from Wythenshawe has dished out an average of 3.68 yellows per game in 2021/2022 and has shown four red cards in his 22 top-flight appearances.

Only Andy Robertson (4) and Fabinho (5) have been shown more than three yellow cards this season in the league for the Reds, and it’s worth noting that the former has never been booked against Manchester City in the 16 times he has faced them in his career!

This leaves Fabinho as a rather easy selection here when it comes to picking out a Liverpool player to be carded. The Brazilian averages 1.3 fouls per game this season, but more importantly he has been booked in four of his eight career appearances against Manchester City, including in the last two for Liverpool. He may be a short price at 6/4 with bet365 but if there’s one player from Liverpool we’d side with here, it’s Fabinho.

Based on our findings above, the following Bet Builder pays 98/1 with Betfair. 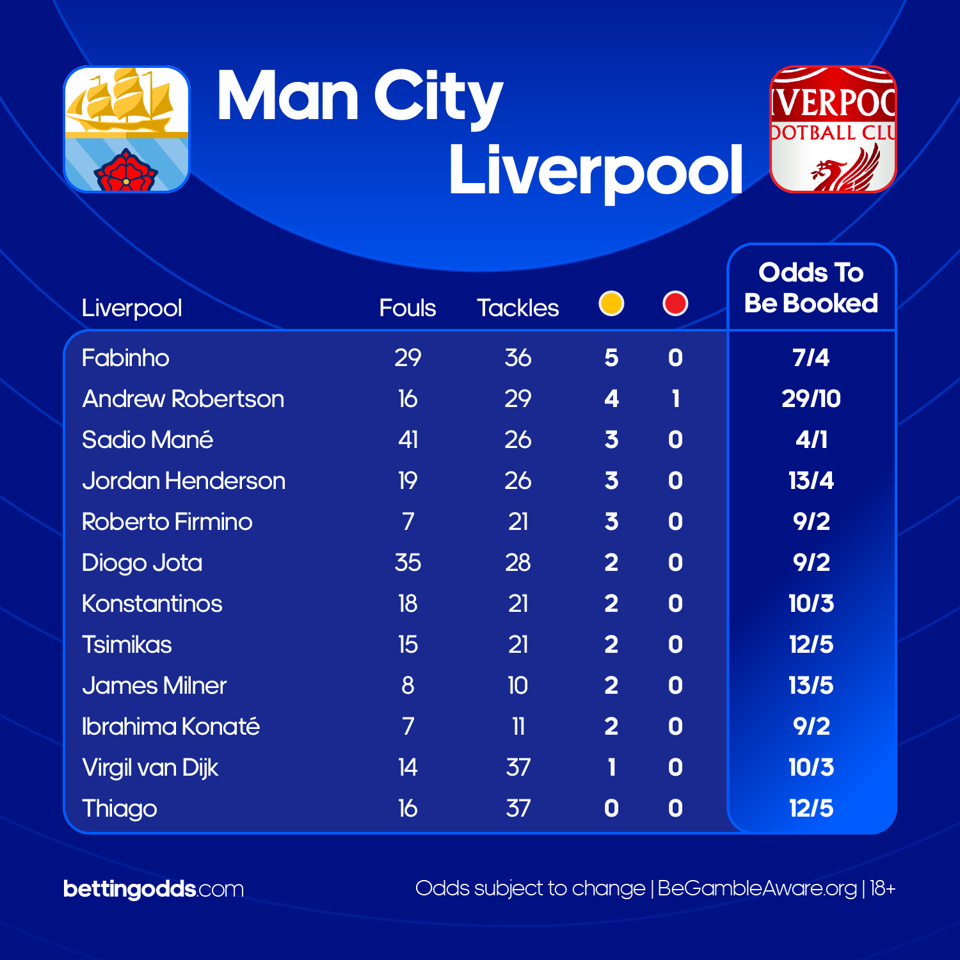