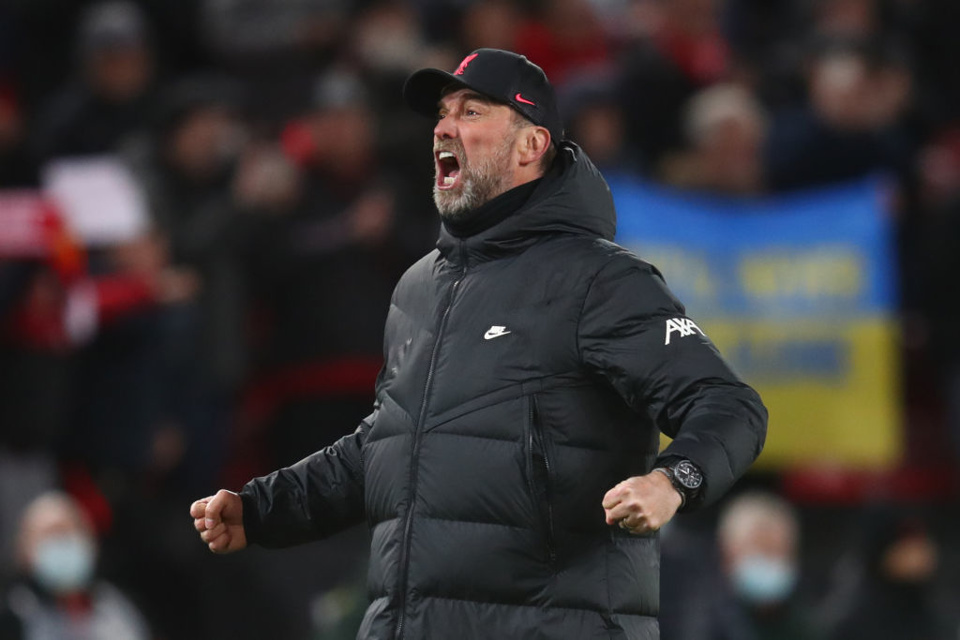 Jurgen Klopp will be hoping for another magical European night at Anfield
By Tipster Wizard
08:31 Wednesday 27th April 2022 - 4 minute read

Live on BT Sport, Liverpool host Villarreal in the Champions League semi-final first leg at the Anfield this Wednesday.

Klopp’s men qualified for the semi-finals after dispatching Benfica 6-4 on aggregate in the quarter-finals as they target yet another European trophy. They claimed a hard-fought win over rivals Everton at the weekend to go one point behind Manchester City in a thrilling title race but will now have to concentrate hard on the task in Europe as their opponents Villarreal come into the semi-finals after upsetting the likes of Juventus & Bayern Munich in the round of 16s & the quarter-finals respectively.

They have been extremely impressive defensively so far in this campaign and two league wins in the past week should have further boosted their confidence ahead of this all important semi-final first leg. Unai Emery’s men will be hoping for a quiet first game so they can pull off another upset in the second leg back at home but will know it will take a gigantic effort to get the better of Liverpool who are one of the most lethal teams in Europe at the moment.

An exciting Champions League semi-final awaits us and as usual, I have you covered with two of my best betting angles included in the preview below:

Roberto Firmino is doubtful for Liverpool after a foot injury kept him out of the Merseyside Derby.

Alberto Moreno is out for Villarreal while Francis Coquelin & Gerard Moreno are doubtful.

- Over 0 goals in the 2nd half for Liverpool

- Over 1.5 offsides in the match for Villarreal

- Over 3 corners in the match for Liverpool

Liverpool have scored a second half goal in their last 10 consecutive games in all competitions while Villarreal have conceded in the 2nd half in 6 of their last 7 games in all competitions. Liverpool’s high line has consistently caused teams to be caught offside as Liverpool average almost 3 offsides per game against them. Villarreal should be looking to play on the break here and should comfortably clear the “Over 1.5 offsides” line.

Finally, I expect there to be clear domination from the home side as they look to take a big lead to Spain. This should result in plenty of corners for Klopp’s men. They have cleared the “Over 3 corners” line in 94.1% of their home games in the Premier League and should do it comfortably here again. Combining these 3 selections gives us a cracking bet-builder @ 4/5 and I am happy to back that with a 1pt stake as our main bet for this massive semi-final clash.

Liverpool vs Villarreal Match Zone
Over 2.5 offsides for Villarreal, Over 5 corners for Liverpool, Over 1 2nd half goals for Liverpool
5/1
Odds correct as of 2022-04-27 08:31 Odds subject to change.

- Over 1 goals in the 2nd half for Liverpool

- Over 2.5 offsides in the match for Villarreal

- Over 5 corners in the match for Liverpool

Following on from our main bet, I will be taking higher lines on all 3 selections for the long-shot. Liverpool are capable of blowing teams away and will know the importance of a big lead going into the 2nd leg so these lines on the goal and corner markets are definitely worth taking. As for the offsides, Liverpool average almost 3 per game against them so this higher line of “Over 2.5 offsides” should have a great chance of landing. Combining these 3 selections gives us an attractive 2nd bet @ 5/1 and I am happy to stake a small 0.25pt on that as our final bet for this game.