Liverpool v West Ham Tips: Side with Sadio in the shots market 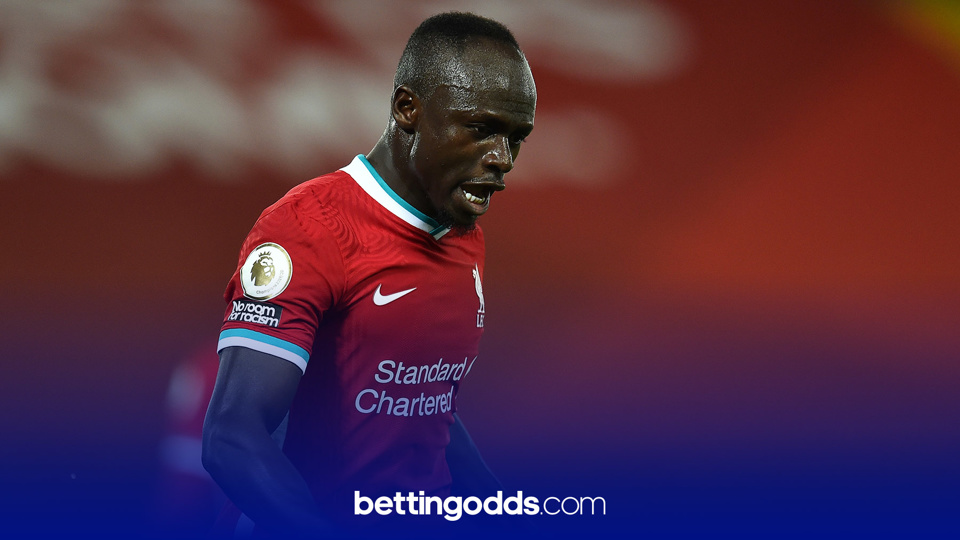 Sadio Mane is averaging four shots per game this season and features in our football tips for the game
By Anthony Eadson
12:18 Friday 30th October 2020 - 5 minute read

West Ham travel to Anfield on Saturday tea-time with Liverpool having the chance to go top of the table and leapfrog their neighbours Everton. I’ve got three football tips for the game which kicks off at 5:30pm and can be seen live on Sky Sports Main Event.

Jurgen Klopp has a selection headache in defence after Fabinho became the latest addition to the treatment table this week. With Virgil Van Dijk sidelined for at least eight months, 19-year-old Rhys Williams may start at the heart of the Liverpool defence along with Joe Gomez. Naby Keita and Thiago Alcantara remain a doubt but Alisson should return in goal for the champions.

West Ham were dealt a hammer blow with the news that their star man Michail Antonio will be out for around six weeks with a hamstring injury. Sebastien Haller should slot into the side, spearheading the attack for David Moyes’ side who have no other injury concerns.

The last time Liverpool were beaten in the league at Anfield was back in April 2017 and it’s no surprise them instilled as the 2/5 favourites to come away with three points on Saturday. The draw is available at 4/1, with West Ham being given just a 12.5% chance of victory with odds of 7/1.

Liverpool v West Ham
Sadio Mane 2+ shots on target
7/5
Mane has scored four league goals in five games is averaging 1.8 shots on target per game. This selection has landed in three of his five games this season
Odds correct as of 2020-10-30 11:45 Odds subject to change.

The first of three selections I’ve picked out for Saturday’s clash at Anfield is Sadio Mane to have two or more shots on target, priced at 7/5 with both Betfair and Paddy Power. The Senegalese forward has four league goals to his name already this campaign after just four matches and is averaging an impressive four shots a game.

When it comes to shots hitting the target, the 28-year-old has managed nine in his five appearances, averaging 1.8 per game. Having a look back through the data from this season and Mane to have two or more shots on target has landed in three of his five league games this term.

With Betfair and Paddy Power only giving this selection an implied probability of 42% I think we could have a little bit of a value play with two or more shots already landing in 60% of Mane’s Premier League games. I see Liverpool getting plenty of opportunities against West Ham who could struggle without the influence of Antonio in the final third. Sky Bet has this same selection priced odds-on at 10/11 which does give some appeal to the 7/5 offering from Betfair and Paddy Power.

Trent Alexander-Arnold to have one or more shots on target from outside the box
5/2
Trent has taken 10 shots this season in the league, all 10 have come from outside the box This selection has landed in his last two games
Odds correct as of 2020-10-30 11:50 Odds subject to change.

Next up I’m fancying right-back Trent Alexander-Arnold to have one or more shots on target from outside the area. This is priced at 5/2, and again is available with both Betfair and Paddy Power. First up I’d like to point out that all ten of Trent’s shots this season in the league have come from outside the area.

Yes that’s 100% of his shots, ten out of ten. This selection has actually landed in the last two games, one of which I tipped up for BettingOdds.com in the Merseyside derby a couple of weeks ago. Betfair have Alexander-Arnold priced at 7/5 to have the standard one shot on target. However with there being 5/2 available for that shot on target to come from outside the area, it makes perfect sense to back the latter with 100% of his shots this season coming from range.

Premier League Betting
Salah 2+ shots on target, Soucek and Gomez to be carded
40/1
Salah is averaging 4.8 shots per game this season in the league and 2+ shots on target has landed in three of his last four games Soucek has committed for more fouls than any other player in the league in 2020/21 Gomez was booked on nine occasions last season, more than any other Liverpool player
Odds correct as of 2020-10-30 11:50 Odds subject to change.

As always I’ve picked out a longshot for the game. At 40/1 with Paddy Power I’ve opted for Mo Salah to have two or more shots on target with both Tomas Soucek and Joe Gomez to be carded.

Only Harry Kane has registered more shots on target in the 2020/21 Premier League season than Mo Salah, who currently has twelve in his six appearances. Salah to have two or more shots on target has landed in three of his last four games and being at home to West Ham and also on penalty duty, I think it should land once again.

The first of two players I’ve picked out to be carded in the match is West Ham’s Tomas Soucek. The 25-year-old from the Czech Republic has made four more fouls than any other player in the Premier League this season. He loves to break up play and with the quality on show from Liverpool I think we could see the cynical Soucek come out to play.

Bringing home this 40/1 shot is Liverpool’s Joe Gomez to be carded. In the 2019/20 season Gomez was the most booked player for the Reds with six in 28 appearances in the league and another two in five in the Champions League. He has been known to think he is ‘the big man’ at times and I think Sebastien Haller should look to give Liverpool’s central defence a rough game.

Best of luck to those following the selections on Saturday, As always, please remember to gamble responsibly