Liverpool v Manchester United Tips: Back United from the spot at Anfield 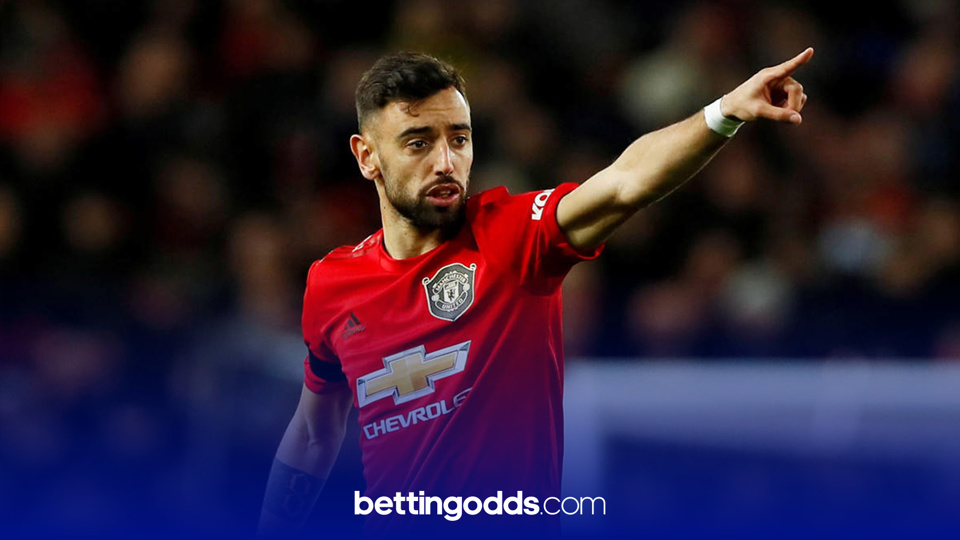 Bruno Fernandes has converted 15 of his 16 penalties since arriving at Manchester United
By Anthony Eadson
16:37 Friday 15th January 2021 - 5 minute read

It’s top of the table clash between the two biggest sides in English football on Sunday as Manchester United try to end Liverpool’s 67 game unbeaten run in the league at Anfield. The game is live on Sky Sports Premier League and we’ve got three football tips for one of the biggest games of the season from our man @AnthonyEadson.

Virgil Van Dijk, Joe Gomez, Diogo Jota and Naby Keita will all miss the game through injury for the hosts. Thiago should make his full home debut in the centre of midfield while Rhys Williams should partner Fabinho at the heart of the Liverpool defence.

Anthony Martial is a slight doubt with a hamstring issue for Ole Gunnar Solskjaer’s side which could lead to another start for Edinson Cavani. Eric Bailly has been impressive in his last two games and should keep his place alongside Harry Maguire in central defence.

Liverpool are priced at even money (1/1) with the bookmakers to get the three points at Anfield. That’s the biggest price they have been since playing Manchester City on home soil back in October 2019. The draw can be backed at 3/1, with a huge win for United available at 5/2.

Liverpool v Manchester United
Jack Kitson
Bruno Fernandes 1+ shot on target from outside the box
6/5
Odds correct as of 2021-01-15 16:20 Odds subject to change.

Bruno Fernandes has been an absolute revelation since joining Manchester United. Since his transfer from Porto, United have picked up more points than any other team in the Premier League. I’m backing the Portuguese playmaker to have one shot on target from outside the box against Liverpool which is available at 6/5 with both Betfair and Paddy Power.

No player in the Premier League has taken more shots from outside the area than Bruno Fernandes with 32. Bruno is the free-kick taker for his side and with Paul Tierney in charge on Sunday I’m expecting there to be plenty. The official ranks 2nd of 19 for fouls per game (26.27) this season in the Premier League and with what's at stake in this game I’m hopeful of some free-kick opportunities for Fernandes.

It’s four shots on target from outside the box, in his last two games for Bruno Fernandes. That includes two against Manchester City in the League Cup semi-final. With an average of 1.9 shots per game from outside the area this season I’m attracted to the 6/5 available for 1+ with Betfair and Paddy Power, while Sky bet have this same selection at just 4/6.

Next up I’m fancying Manchester United to score a penalty which is priced at 11/2 with bet365. Yes I know, Manchester United and penalties, not exactly the most inspiring selection but here’s why I think we could well get one at Anfield this weekend.

As I mentioned above Paul Tierney is the referee for the game. Tierney has actually awarded Manchester United a penalty five times in his last ten games that he officiated with them involved. In total since the start of last season, The Red Devils have been awarded 33 penalties and since arriving Bruno Fernandes has converted 15 of 16.

At 40/1 I’ve also picked out a longshot for the game which involves two players to have a shot on target and two players to be carded, available with Paddy Power.

First in the quartet it’s Marcus Rashford to have at least one shot on target. With 21 shots on target in 17 appearances this season, Rashford is averaging well over a shot on target per game this season. With United looking to hit Liverpool on the counter, his pace could be a factor.

The second player I’m including to have a shot on target is Liverpool’s Sadio Mane. With an average of 1.6 shots on target and 3 shots per game this season, I’m more than happy to add the Senegalese forward into this Bet Builder. Mane has six goals to his name this season and will be itching to catch teammate Mo Salah in the scoring charts.

Moving onto the bookings and for Manchester United I’m including club captain, Harry Maguire. No player has picked up more cards for United this season than the centre-half who has six yellows in total. Maguire was also sent off for England in the Autumn and looks primed to pick up a card with Tierney in charge in what should be a heated affair.

Thiago Alcantara should make his full home debut for Liverpool on Sunday and I fancy the Spaniard to also find his way into the notebook. The midfielder was booked in his most recent game against Southampton and in his final season with Bayern Munich, picked up an impressive seven bookings in 24 league appearances.

That’s three bets in total at prices of 6/5, 11/2 and 40/1. Let’s hope for an entertaining game and not the anticlimax we have seen in the past between these two sides. Best of luck to those following and please always gamble responsibly

Bruno Fernandes in the Premier League in December 2020: