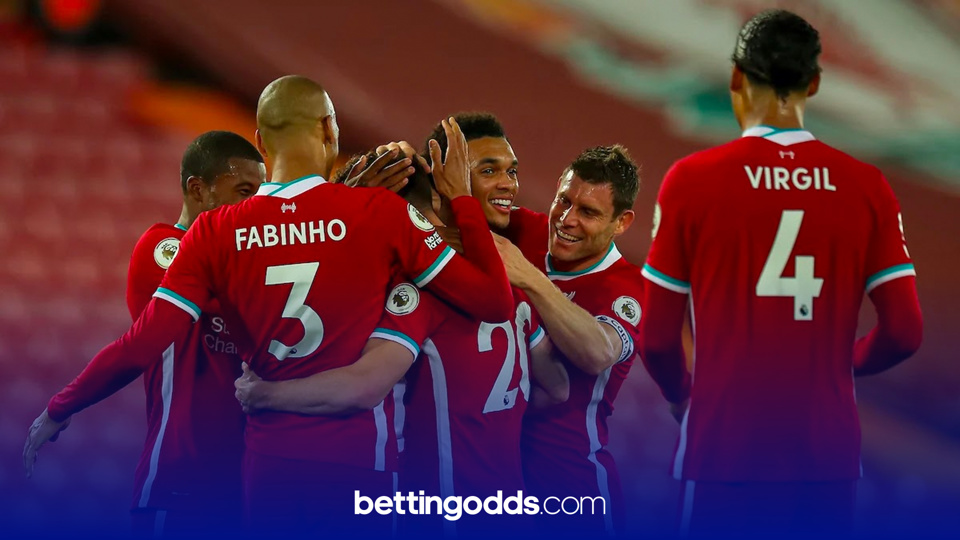 Liverpool have not gone four games without scoring in the league since the 1999/2000 season and we fancy under 2.5 goals as part of our football tips this evening
By Anthony Eadson
15:00 Wednesday 20th January 2021 - 4 minute read

After going three Premier League games without scoring, Jurgen Klopp and his Liverpool side have a huge game on Thursday as they welcome Burnley to Anfield. You have to go back to the 1999/2000 season for the last time that the Reds failed to score in four consecutive games and we’ve got three football tips for the match from our man @AnthonyEadson

It’s now 68 games since Liverpool were beaten at Anfield in the league and bookmakers have 16/1 on offer for those who fancy Burnley to go down in history and end that remarkable run. The draw is available at 13/2 with a home win at the odds-on price of 2/9.

Jurgen Klopp will hope to have Joel Matip available to return at centre-back after missing out against Manchester United at the weekend. Joe Gomez, Virgil Van Dijk, Diogo Jota and Naby Keita all remain on the treatment table for the hosts.

Dwight McNeil has only made the substitutes bench in the last two fixtures for Burnley and should return to the starting line up. Charlie Taylor is also nearing a return for Sean Dyche’s side.

As I mentioned above, it’s now been three Premier League games since champions Liverpool managed to find the back of the net. One of their issues over recent weeks is breaking down teams who sit deep, which was the case against West Brom and Newcastle.

Burnley have been much improved in the second quarter of the season and have looked much more solid at the back, mostly due to the pairing of Ben Mee and James Tarkowski. Under 2.5 goals has landed in six of Burnley’s last seven league matches with under 1.5 goals landing in all of their last four.

It’s a good time for the Clarets to play Liverpool with this game coming sandwiched in between two fixtures against Manchester United for Klopp’s men. Burnley got themselves a point at Anfield last season in a 1-1 draw and I’m fancying a low scoring affair on Thursday evening. For those reasons, I’ve taken the 8/5 on offer with BetVictor for under 2.5 goals in the game, which is currently the top price on offer.

I’ll be having a small play on Curtis Jones to be carded at 9/1 with Paddy Power, should the midfielder start on Thursday. Mike Dean will be the referee in charge of the game and last season the infamous official ranked second for yellow cards brandished, of the 19 ref’s to take charge in the Premier League, an average of 4.15 per game. This season Dean is averaging 3.64 yellows per game which is still the fourth-highest of all the Premier League referees this campaign.

Curtis Jones is a player that has been on my radar a few times this season in the bookings market. The youngster has been booked three times in all competitions and I still feel he is slightly overpriced at 9/1 here. Jones is averaging 1.3 fouls per game on average in the league this term and with Mike Dean in charge I’m fancying his chances of picking up his fourth yellow of the campaign.

Rounding off this trio of selections for Liverpool v Burnley is a double on Thiago Alcantara to have one shot on target, with Ashley Barnes to be carded. This is currently available at the boosted price of 18/1 with Paddy Power.

Not necessarily known as a goalscoring threat, Thiago has actually registered at least two shots on goal in all three of his starts for Liverpool in the Premier League this season. The Spaniard put in an impressive display against Manchester United at the weekend which included a shot on target that tested David De Gea from range. It’s only five league appearances for Thiago this season, with two of those being as a substitute, however he has registered at least one shot in all five of those matches.

Ashley Barnes knows can be a nuisance for defenders at times and is not afraid to put in a strong challenge. The forward has picked up an impressive 25 yellow cards in the Premier League since the start of the 2017/18 season and already has three to his name this campaign. Barnes has only started six away fixtures this season but has been yellow carded in three of those and with plenty of defensive work to do at Anfield I fancy him to pick up another with the unforgiving Mike Dean in charge.

That’s three plays in total, priced at 8/5, 9/1 and 18/1. Good luck to anyone following, the game can be seen live on Sky Sports Main Event, kicking off at 8:00pm. Please always gamble responsibly.