League Two play-off betting: Where does the value lie in this Thursday's semi-final first legs

After the EFL announced that the season will be decided by using a points-per-game system in League’s One and Two last week, all that is left to decide in the third and fourth tier is which sides will be promoted via the play-offs.

The first-leg of the League One play-off semi-finals will be contested between Portsmouth & Oxford United and Fleetwood & Wycombe on the 3 July, with the return leg’s taking place three days later on 6 July. The two winning semi-finalists will then meet at Wembley on 13 July to decide who is promoted to the Championship.

Before all that though, Cheltenham & Exeter, and Colchester & Northampton each meet in the first-leg of League Two play-off semi-finals this Thursday, with the return leg taking place next Monday, 22 June. The final will be played, at Wembley, on Saturday 29 June to determine which club will be plying their trade in League One next season.

With the League Two play-offs kicking off in just two days' time, BettingOdds.com assesses where the value could potentially lie in the betting markets for these particular fixtures.

Despite lying beside each other in the prematurely-curtailed League Two standings, Colchester finished eight points behind fifth-placed Exeter City so are expected to have a job on their hands to beat the Grecians over two legs.

Indeed, as we have seen countless times before, league form counts for nothing in the lottery of the play-offs, and there was little to separate these sides on the two occasions they met earlier this season, with draws the end result in both fixtures.

Both teams have huge attacking assets in the shape of Theo Robinson (Colchester) and Ryan Bowman (Exeter), with each making it into the league’s top-scorer chart with 11 and 13 goals respectively.

The U’s have a tremendous supporting cast, too, with the likes of Frank Nouble (five goals, five assists) and Luke Norris (nine goals, two assists) all expected to be influential for the Essex side in their quest for promotion.

Prior to the enforced break, Exeter had been extremely poor on the road, losing five of their previous six away bouts.

Although playing behind-closed-doors does eliminate home advantage to a degree, there are still huge question marks surrounding Matt Taylor’s side away from home - something which could cost them dearly in these play-offs matches if their issues have not been rectified during the recent layoff.

Colchester’s price (7/5) seems favourable considering Exeter’s dismal away record in 2020, and we can potentially see them gaining the advantage on home soil.

With both teams possessing strong attacking talents, and the recent history between the pair considered, we envisage goals in this clash. Players from each side will be itching to hit the ground running after a lengthy period of rest, with the target of reaching the final at Wembley a huge motivating factor.

Colchester will know that they need to make use of their home advantage (for what it’s worth) by grabbing a foothold before the away leg next week, so expect John McGreal’s men to come out of the blocks quickly here.

Both teams to score is a short price at 10/11, so the value lies in combining this outcome with a home win. Colchester & BTTS is priced up at 9/2 with bet365, which is better than the 4/1 SkyBet and Boylesports are offering. 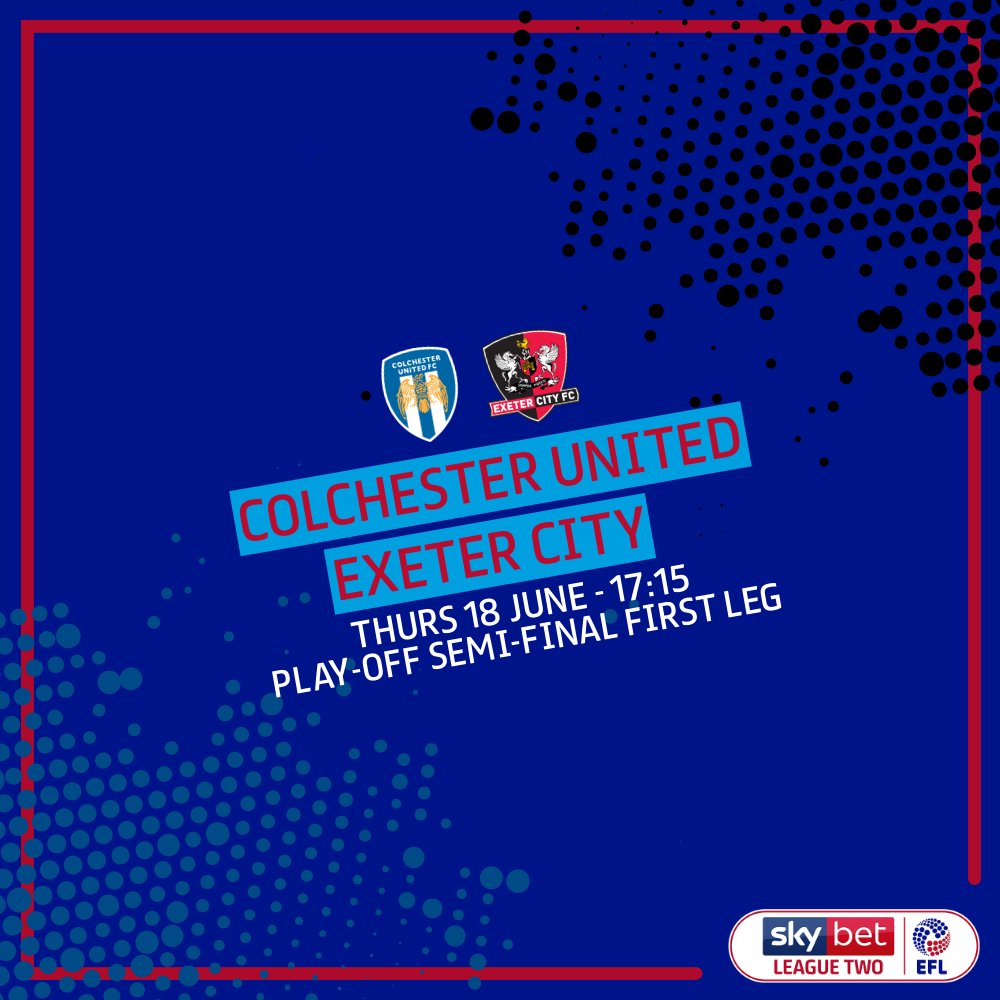 Some #MondayMotivation for you!

Northampton welcome Cheltenham in Thursday’s evening kick-off at Sixfields. The hosts crept into the play-off places by a single point and will perhaps be thankful that the season was finalised early considering their poor form before the break, which saw them take just six points from a potential 21.

Cheltenham have been impressive all season long and were bang in form before the coronavirus pandemic halted proceedings, losing just one of their previous nine league matches.

Michael Duff’s men were only four points off obtaining an automatic promotion spot and could well have achieved that feat had the season not been ended prematurely. Instead, they head into the play-offs as the highest ranked side with the most amount of momentum behind them thanks to their scintillating form before the break.

It is, then, perhaps surprising to see that Cheltenham are underdogs for this match, priced at 11/5. As we have seen in recent weeks with the Bundesliga, home ‘advantage’ essentially gets thrown out the window with no fans in attendance, levelling the playing field for the visitors this week.

Cheltenham have a superb record against Northampton, too. The Gloucestershire outfit have lost just one game against their East Midlands counterparts since 2013, winning four of those duals and drawing three, so the history book sways heavily towards the Robins in this clash.

Again, the lottery of the play-offs is something which should never be underplayed and as we all know, anything can happen. Northampton are no mugs and will be desperate to gain the upperhand on home soil before travelling west on Monday, though it seems that they will have a significant job on their hands to break down a side who have displayed great resilience all season long and have the best defensive record in the league by a considerable margin (27 goals conceded in 36 games).

A cagey encounter is expected this Thursday, but we just cannot ignore Cheltenham’s price to come away with the spoils looking at how their season has transpired thus far.

With such a solid and reliable defence, Northampton will do well to forge many openings, especially as it is likely that their opponents will look to just shut them out and get them back to Whaddon Road next week with a clean sheet in the back pocket.

Cheltenham to win-to-nil at 4/1 with Betfair could be the pick for this one. The Robins have shown just how strong they are defensively all season, while Northampton started to show signs of faltering before the break and only just managed to creep into the play-off places.

We feel as though the visitors’ price to win offers huge value, and coupling it with them keeping a clean sheet only helps to boost the odds further.

If you fancy both of the tips mentioned in this article - the double would return an appetising £137.50 from a £5 stake. 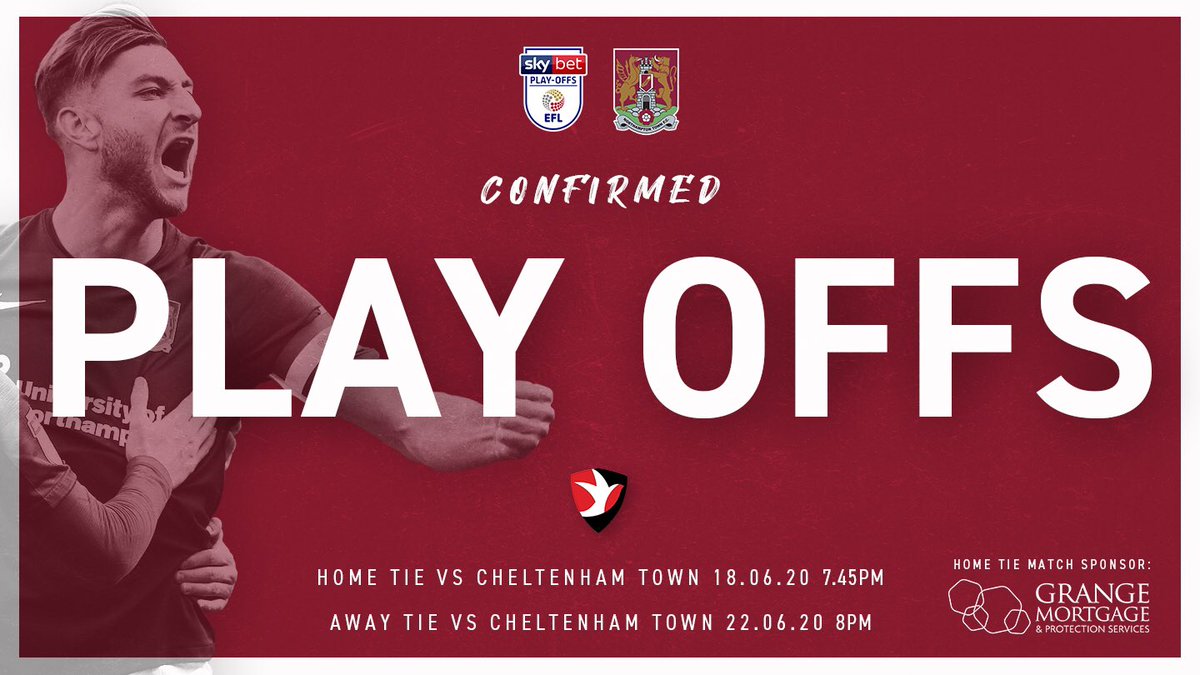 Following a vote by @SkyBetLeagueTwo clubs this afternoon, the play offs have now been ratified and we'll face Cheltenham Town in the semi finals. #ShoeArmy 👞 https://t.co/sobSHZYQq0