Women's boxing has been growing year by year in strength and prestige and on Saturday night we have probably the biggest women's fight of all time. Ireland's undisputed Lightweight World Champion Katie Taylor puts all her bets on the line against one of the GOAT's of women's boxing - Amanda Serrano. The 33-year-old Puerto Rican has won nine major world titles over seven different weight classes in a glittering pro career. If the promo video above doesn't excite you, you don't like boxing. We've asked our head boxing tipster @OddsT3rrier to preview this huge fight and pick out his best bets.

The fight will be held in front of a huge crowd at the world famous Madison Square Garden in New York on Saturday April 30th and will be broadcast live and exclusively on streaming giant Dazn. The event will start at 1am with the ring walks for the main event expected around 3.30am. The card is a Matchroom/Most Valuable Promotions event and is a Eddie Hearn/Jake Paul co-promotion.

What a huge night for women's boxing! For the first time in the Madison Square Garden's 143 year history, two female fighters will be headlining an event at the world famous arena. The build up to this fight has been extremely respectful. Both fighters clearly have a lot of respect for each other as witnessed in Dazn's promotional show Face to Face.

Taylor was due to fight Serrano back in 2020 but the COVID-19 pandemic put a halt to that and many other fights at the time. With no fans in attendance, the fight couldn't be agreed, mainly due to pay disputes and both fighters went their separate paths. However, now they finally meet up for all the belts and a battle of the pound-for-pound 1 and 2 in the world. It's a fight that Serrano is a slight favourite in and Taylor knows exactly how hard a night she's in for.

“It will be the toughest fight of my career, of both our careers, I think. I genuinely believe this is the biggest fight in boxing right now. It’s a real 50-50 fight and it will involve a lot of heart and a lot of courage and we will definitely be in the trenches. 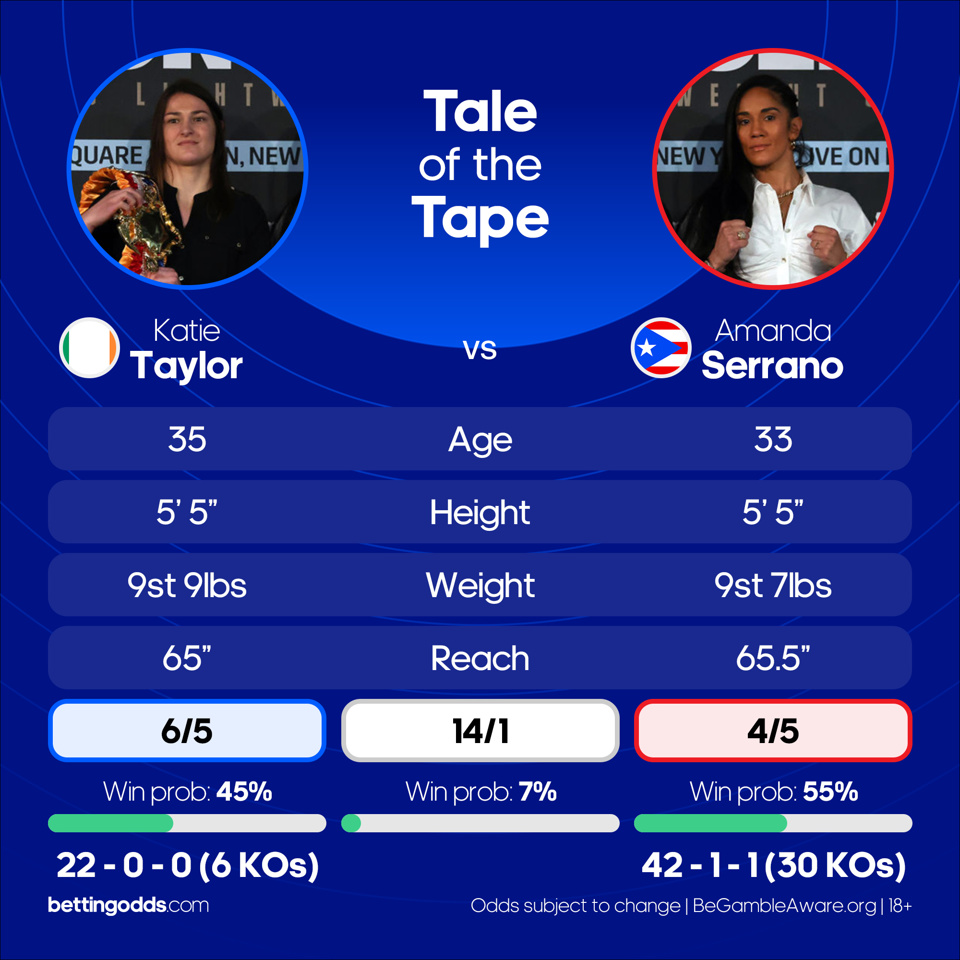 I agonised long and hard over this pick...

Let's get something straight; I am a huge fan of Katie Taylor and everything she's done for both Irish and women's professsional boxing. She is not only exceptionally talented, but a fantastic ambassador for the sport. Long gone are the days of people laughing at women's boxing (including her own promoter) and saying they don't belong in there etc. Nowadays, women's fights taking place on televised cards are extremely commonplace, as are women headlining their own events. This is down to the likes of Taylor and Savannah Marshall, who not only know how to fight but also are great in front of the camera too.

Whilst Katie has been fighting in the massive spotlight of Sky Sports and Dazn, Amanda Serrano has done things the hard way. She had no amateur career to speak of and has been fighting on small hall shows and as an undercard fighter. She won her first title back in 2011 and since then has shown a remarkable ability to dip in and out of weight classes and accumulate belts. She has fought as light as Bantamweight and as heavy as lightweight. But make no mistake, Serrano will not be the smaller woman on fight night. She is half an inch taller than Taylor and has a bigger reach.

Another thing Serrano carries, in the words of Tony Bellew, is POWER! She has a ridiculous knockout ratio, especially for women's boxing, with 30 KO's in her 44 fights. A lot of these have been in the first round, showing exactly how heavy her hands are.

Taylor will be relying on her superior boxing skills and work rate to win this one but she has shown vulnerability before, especially against bigger hitters such as Define Persoon and Natasha Jonas and I expect Serrano to drop her here.

The 4/5 on Serrano will be my main bet of the evening.

I'm doubling down on my first pick and backing Serrano not only to inflict Taylor's first defeat, but also become the first person to stop her. Taylor has shown she possesses a great chin in the past but she has never fought anyone with the power of Serrano before. I think she will get drawn into a firefight and Serrano will drop her and ultimately finish her off.

The 7/2 on offer at Paddy Power can be loaded directly using the link above.

Enjoy what is sure to be a brilliant fight and please gamble responsibly.

Fury vs. Usyk Odds as BettingOdds.com take a First Look at the Betting Markets ahead of the proposed Heavyweight…