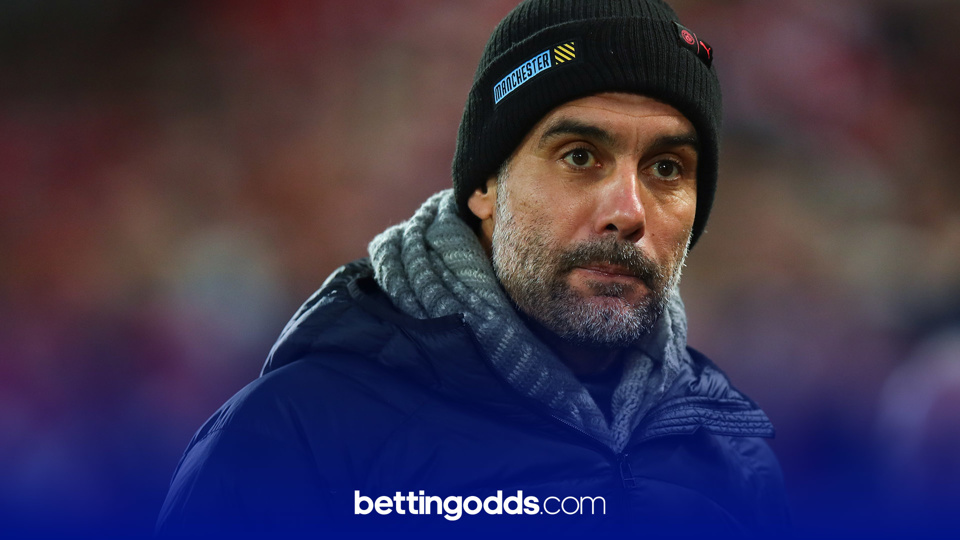 Pep Guardiola has failed to win at Anfield in all five attempts with Manchester City
By Anthony Eadson
17:20 Thursday 4th February 2021 - 5 minute read

Liverpool may have suffered their second consecutive home defeat at the hands of Brighton on Wednesday evening, but there’s no time for feeling sorry for themselves as The Reds have one of their biggest games of the season, with Manchester City the visitors to Anfield on Sunday.

Manchester City are now the 1/7 favourites with the bookmakers to claim this season’s Premier League title but history would suggest that they will not have things their own way on Merseyside this weekend. With recent meetings and statistics in mind we’ve asked is Pep Guardiola scared of playing Liverpool at Anfield?

First up let’s start with Manchester City’s record when playing at Anfield. The pair have met on five occasions, four in the Premier League and one in the Champions League. Pep Guardiola is yet to win a single one of those, with one draw and four losses to his name.

It’s fair to say that with no wins on the board against Klopp’s Liverpool at Anfield, you would not be filled with confidence about backing the Cityzens for the three points on Sunday. Having a look at the Spaniard’s worst record at stadiums where he has managed more than five games and it’s Anfield that comes out top.

Manchester City have not won at Anfield since 2003 in all competitions and in many ways it appears there has never been a better time to end that run with Liverpool not having scored in three home games. 1984 was the last time that happened and with City having kept a clean sheet in eight of their last nine league games, it’s hard to not believe that their barren run at Anfield will not come to end on Sunday.

City are currently priced at Evens (1/1) to beat last season's Champions on Sunday with Betfair and most other firms. Liverpool can currently be backed at 12/5, which is the biggest price they have been to win a game at Anfield since January 2018. There may be hope for Reds fans though if those previous results are anything to go by and we couldn’t resist bringing up that clip of Pep letting out his feelings on Jurgen Klopp’s front three in that compelling Amazon documentary. Scared, maybe just a little?

After looking at the recent results between these two, it’s time to look at some player stats to see if there have been any stand out trends in these games at Anfield.  One particularly popular market with casual punters at the moment is shots and shots on target.

Most shots on target in the last five games at Anfield

As you can see here only Mohamed Salah stands out, and with only Harry Kane and Kevin De Bruyne averaging more shots in the league this campaign than Salah, you would fancy him to be the stand out performer of their infamous front-three. Both sides have produced low numbers historically over the last five fixtures when it comes to testing each other's keepers. Liverpool have averaged 4.0 shots on target per game with City drastically lower at a disappointing 2.2 per game.

The Reds have outperformed the Sky Blues in goal output with 11 compared to just three from Guardiola’s side. We’ve listed the top goal scorers over that period below. It’s worth noting here that Sadio Mane has in fact scored with all three of his shots on target so it may prove profitable to follow the Senegal forward in the anytime scorer market rather than the shots on target.

Player goals in the last five at Anfield

Finally let’s have a look at player cards. Michael Oliver will be the man in the middle on Sunday and the official averages 3.25 yellows shown per game this season which ranks him 7th of the 19 who have taken charge of Premier League fixtures this campaign.

We’ve widened our sample to the last 10 games between the two sides when it comes to cards and when these two sides last met we correctly recommended Raheem Sterling to be booked at 11/2. The former Liverpool and England International has been shown more cards in the last ten between the teams than any other player and he may be one to watch on Sunday if priced around 11/2 with bet365 once again.

Cards shown in the last 10 meetings

Another interesting element about Pep’s team selections at Anfield we have noticed is that City have played five different left backs in their last five games at Anfield (Alexandar Kolarov, Fabian Delph, Aymeric Laporte, Benjamin Mendy and Angelino) which is an area where Pep has struggled to contain Salah previously. Aymeric Laporte played at left-back in a similar role against Burnley on Wednesday evening and has been carded twice against Liverpool for City in the past. Whoever starts in that position could be  could potentially be one to look at in the to be carded market.

It’s hard to see past a Manchester City win based on their current form in comparison to Liverpool in the Premier League, although history tells us that we should not right off a Jurgen Klopp side on home soil. The game can be seen and live on Sky Sports Premier League kicking off at 16:30, and if you are having a punt, please remember to do so responsibly. 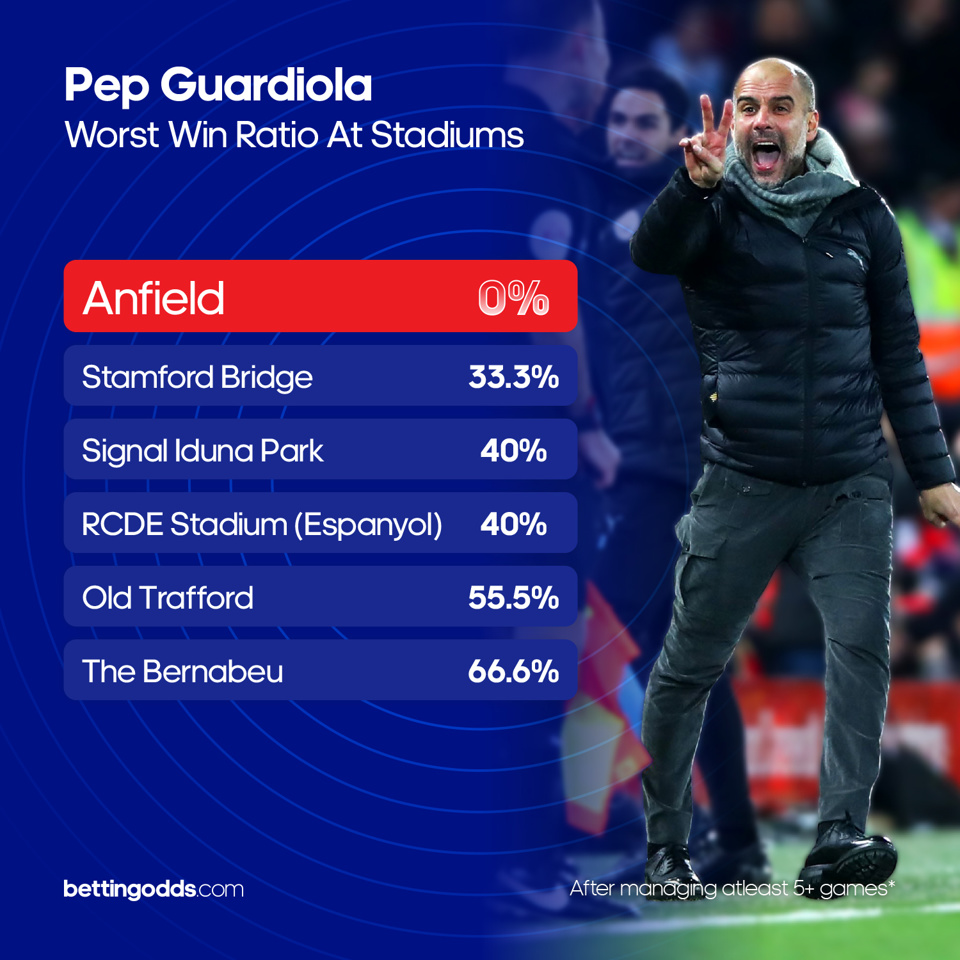