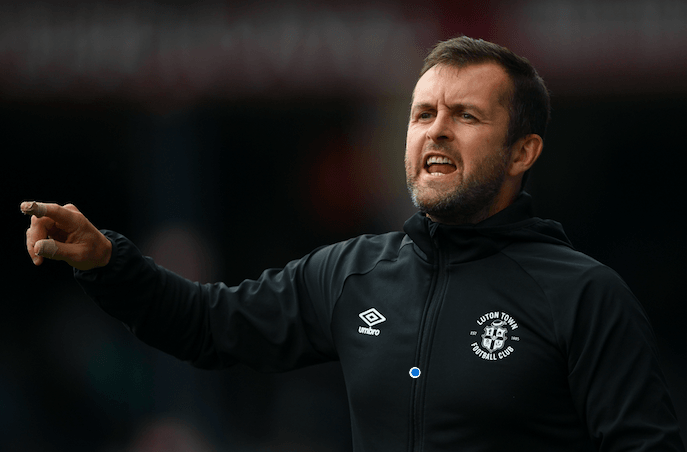 Nathan Jones' Luton have won eight of their last 13 in the league and are unbeaten in four.
By Anthony Eadson
13:16 Monday 11th April 2022 - 4 minute read

There’s a big game in the race for the play-offs in the Championship on Monday evening as Huddersfield face Luton in West Yorkshire. With just six games remaining, one point separates these two teams in fourth and fifth in the table and @AnthonyEadson is on hand to provide us with his best bets for the action.

Automatic promotion had looked a realistic option for Huddersfield just a few weeks back but back-to-back defeats against Millwall and Bournemouth means they now should be looking at securing their play-off status. The Terriers saw off Hull City on their most recent outing, although the opposition did have ten men for 45 minutes of that game. Huddersfield play Luton, QPR and Middlesbrough in their next three matches over the bank holiday weekend and know this is a crucial week in their promotion push.

With another key game against Nottingham Forest on Friday this is also a massive seven days for Nathan Jones and his Luton side. The Hatters have surged up into the play-off spots in recent weeks after a run of eight wins from their last 13 matches.

Luton had been on course for a win in their last game, before a late equaliser from Peterborough meant they went away a little disappointed. Nathan Jones will be without striker Cameron Jermoe after he picked up an injury last Tuesday, while Henri Lansbury and Sonny Bradley could both make returns to the starting line-up.

Danny Ward and Jonathon Hogg both missed the trip to Hull but are available for selection here. Carlos Corberan will be without Matty Pearson who faces around two months on the sidelines after picking up a knee injury.

The first of two selections I’ve opted for on Monday evening is Double Chance Luton, along with both teams to receive a card. This is available at 19/20 through the bet365 Bet Builder feature and as I mentioned above, it’s two defeats in their last three league matches for Huddersfield in the league, and looking back further it’s three defeats in their last five when you include the defeat to Nottingham Forest in the FA Cup.

Paired with Luton to win or draw the game is both teams to receive a card. Geoff Eltringham is the referee in charge of this one and of all the Championship officials to have taken control of 10+ games this season, Eltringham ranks 6/20 for yellow cards shown per game with an average of 4.09. In all competitions, Eltringham has given both sides a card in his last 18 appearances.

I feel this could be a feisty affair with so much on the line for both teams at this crucial point of the campaign and I’ve also had a small poke on two players to be carded, in Sorba Thomas and Allan Campbell. Paddy Power go 25/1 on this double via their Bet Builder feature, with other firms such as bet365 going much shorter at 11/1.

No player has more yellow cards for Huddersfield this season than Sorba Thomas who alongside Duane Holmes has eight to his name in the league. The Welshman has been booked in three of his last seven matches and with this in mind I’m surprised to see Paddy Power and Betfair put up a rather generous looking 5/1 on him being carded tonight.

Along with Thomas, I’m also fancying Allan Campbell picking up a card for the away side. Luton’s central midfielder has been shown seven yellows in just 26 starts in the Championship in 2021/2022. Henry Lansbury is the only player to collect more for the Hatters this season with eight. With a good referee for cards in a crucial game I feel 25/1 looks a very reasonable price here on two players who have 15 yellows between them this season.