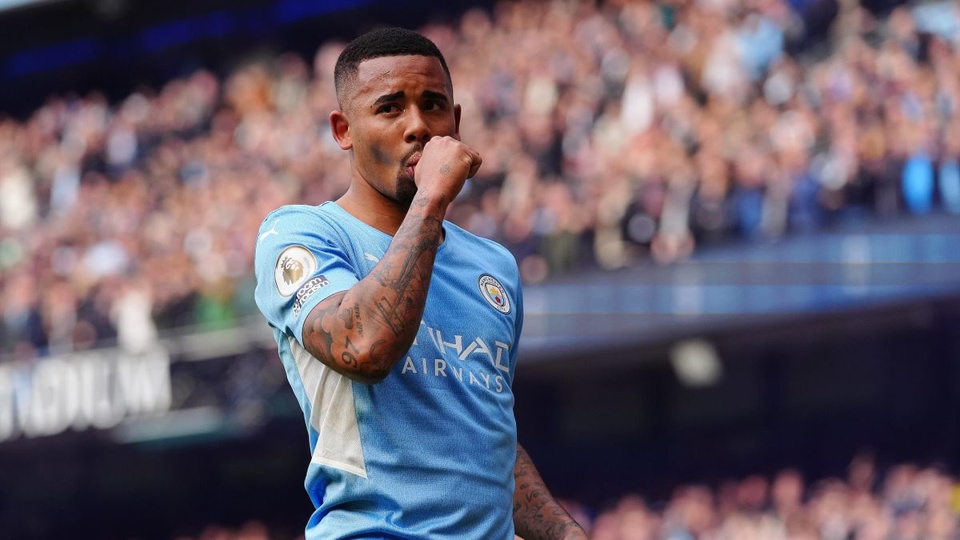 Gabriel Jesus' time in Manchester appears to be up after a five-year stay
By Luke Hamilton
12:18 Thursday 16th June 2022 - 4 minute read

Gabriel Jesus's future has been widely speculated about for much of his Manchester City career. Since the Brazilian's 2017 arrival in England, he has made 40+ appearances across all competitions in every single full season at the club, yet his long-term commitment has been permanently cast with uncertainty.

With the summer transfer window currently open and the new Premier League season starting a week earlier than usual, we've delved into the forward's next club market, assessing who his options could be for a move away from the Etihad, and the chances that Paddy Power are giving him for each transfer according to the odds.

Leading the race for the 25-year-old's signature is a club with a Manchester City persuasion. Pep Guardiola's former assistant Mikel Arteta spent three years in the Etihad dugout alongside the former Barcelona and Bayern coach before switching Manchester for North London to forge his own managerial path.

The Gooners have been odds-on for Jesus' next club since the market appeared, with him being identified as the London-based outfit's top target, and Arsenal highlighted as the player's preferred destination.

This reteaming should not be underestimated when it comes to where he will choose to play his football next. Gabriel's next contract will see him enter the peak of his career and the striker will want certain reassurances when it comes to playing time and his team role. And who can offer him to him better than someone who he's worked under before?

If the location is right, but the allure of Champions League football becomes too strong, a different London-based club could appeal.

Chelsea are next in the market at 10/3, with Thomas Tuchel's side expected to further strengthen this summer after a disappointing campaign that saw them finish 19 points behind league winners Manchester City.

If they are to mount a serious title challenge this time, they'll have to go toe-to-toe with their rivals in the forwards department. City have recruited the services of Erling Haaland, while Liverpool have hit back with the announcement of Darwin Nunez to seemingly replace the departing Sadio Mane.

While Jesus may not possess the same pedigree as his new, younger counterparts, between Romelu Lukaku's imminent return to Inter on loan, Timo Werner's struggles and Tammy Abraham possibly be surplus to requirements again, Stamford Bridge looks desperate for a striker to grab games by the scruff of the neck - something we already know GJ is capable of.

Being knocked back by both Erling Haaland and Kylian Mbappe during this window will leave a sour taste in Real Madrid's mouth for quite some time.

The European giants' intentions were clear when chasing this pair and although Gabriel Jesus presents a step down from either of those two names, Ancelotti and his side will welcome new recruits to accompany Karim Benzema up front.

Los Blancos are a 10/1 shot as things stand and this notable bump in price could suggest that Jesus' desires lay with a Premier League switch rather than a move abroad.

Speaking of PL interest, Antonio Conte's Tottenham round out the top four clubs in the betting. 12/1 at the time of writing, the other North London side have already been busy in the transfer window.

Ivan Perisic, Fraser Forster and Josh Keeley will all be playing in Tottenham's Lilywhite colours next season, with Yves Bissouma and Djed Spence potentially joining them to bolster an already impressive looking squad.

Whether this deal makes sense for club or player remains to be seen, since Jesus' reason for leaving is to feature more consistently, and Spurs being seemingly unable to promise that, with Harry Kane and Heung-min Son occupying two of three forward spots, and Perisic or the permanent signing of Dejan Kulusevski fighting it out for the final place.

The market is rounded out by Atletico Madrid at 16/1, 28/1 for an AC Milan switch or 33/1 for him to sign at Juventus, while Aston Villa and Borussia Dortmund both pose 40/1 outsider shots.