Fulham v Liverpool Tips: Gini to grant our wish of a shot on target 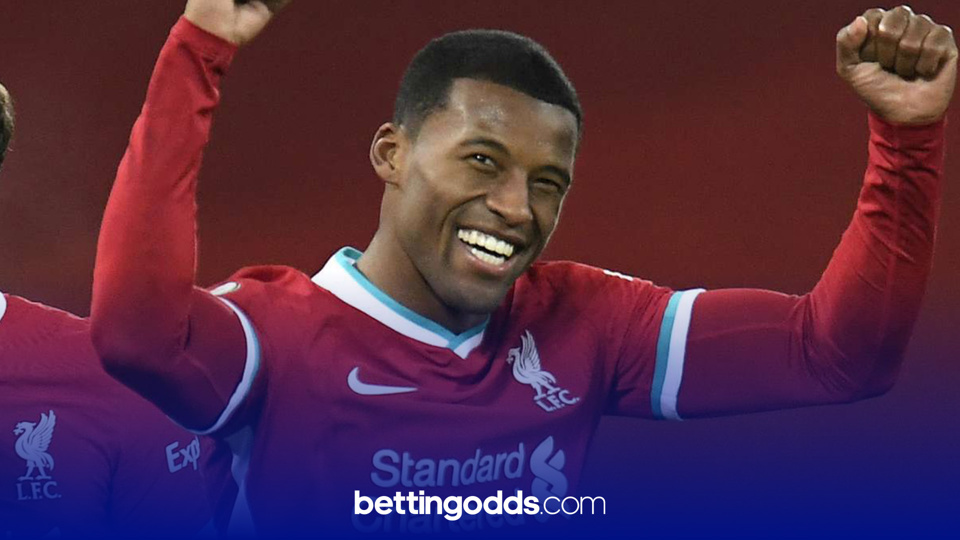 Craven Cottage is the destination for Jurgen Klopp and Liverpool on Sunday as the Reds travel to London to face Fulham. Any slip up from Spurs in the earlier game would pave the way for Liverpool to head back to the top of the table and @AnthonyEadson has provided us with three football tips for the game, which can be seen live on Sky Sports Main Event, kicking off at 16:30.

Scott Parker could well name an unchanged team after defeat against Manchester City last weekend. The Fulham boss has no new injury concerns but is still without Terrance Kongolo and Kenny Tete.

Liverpool will welcome back Trent Alexander-Arnold to Premier League football after he played 90 minutes in the Champions League midweek. Caoimhin Kelleher should continue in goal with James Milner, Joe Gomez, Virgil Van Dijk, and Thiago all still out injured. Alisson and Alex Oxlade-Chamberlain could feature and will be assessed beforehand.

The Premier League Champions have won all six of their most recent games against Fulham and are the 1/3 favourites with the bookmakers to collect the three points on Sunday. The draw is available to be backed at 5/1, with Fulham given a 12% implied chance of victory with odds of 15/2.

Those who watched Liverpool’s comfortable 4-0 triumph over Wolves last weekend will have been lucky enough to see Gini Wijnaldum’s strike nestle in the top corner from 25-yards. I’d happily take a repeat of that this weekend, however I’m fancying Wijnaldum to have one or more shots on target which is priced at 6/4 with Paddy Power.

There has been talk this week over whether or not the Dutch midfielder will sign a new contract at Anfield or if he will call time on his spell on Merseyside. When it comes to shots on target, Wijnaldum has registered at least one between the sticks in four of his ten league starts this season. I see Liverpool dominating this game on Sunday and it would be no surprise to see the midfielders getting in on the action with the front three.

Sadio Mane 3+ shots on target
9/2
Mane has scored in three of his four away league games this season Of the ten games Mane has started in the league, three of them have seen 3+ shots on target land, including against, Chelsea, Arsenal and Leicester
Odds correct as of 2020-12-11 17:15 Odds subject to change.

Sadio Mane only came on for the final few minutes of Liverpool’s Champions League game on Wednesday and is expected to start against Fulham. I’m fancying the Senegalese forward to have a big game and register three or more shots on target. This is available at the boosted price of 9/2 from those good folk over at Paddy Power.

Of the ten games that Mane has started in the league this season, three of them have seen the 28-year-old register at least three shots on target. With four goals in the league this term, three of which have come away from home, Sadio Mane could well add to his tally on Sunday in a game where Klopp’s side should dominate for large spells. Both Coral and Sky bet have this selection at 7/2 so I’d recommend taking the ‘Power Price’ from Paddy Power at 9/2

Today's Tips
Salah to score, Cavaleiro 1+ shot on target, Bobby Reid to be carded
42/1
Salah has scored nine league goals in ten games and is the penalty taker for Liverpool Ivan Cavaleiro has landed a shot on target in all of his last three games including against Manchester City after being played in a more advanced position Bobby Reid has been booked on three of his seven starts this season and will have to help track back covering Sadio Mane who is the 2nd most fouled player in the league
Odds correct as of 2020-12-11 17:15 Odds subject to change.

At 42/1 with Betfair, I’ve opted for a Same Game Multi to conclude my three bets for Fulham v Liverpool. This time the longshot comes in the form of Mohammed Salah to score, Ivan Cavaleiro to have one or more shots on target and Bobby Reid to be carded.

With nine goals in his first 10 appearances of the 2020/2021 season, Mo Salah is once again poised to challenge for the prestigious top-scorer award. Penalty taker for Liverpool, Salah is a constant threat in front of goal and is the first name in the Same Game Multi for Sunday.

Fulham’s Ivan Cavaliero has taken up a more advanced position in recent weeks. Priced at 6/4 for one shot on target I’m willing to take a punt on 1+ shot on target for the 27-year-old, which has landed in his last three games against Manchester City, Everton and Leicester.

Rounding off this 42/1 play is Fulham’s Bobby Reid to be carded. The former Bristol City and Cardiff City man has been booked in three of the seven games he has started in the Premier League this season. Reid will have plenty of tracking back to do on Sunday and that will involve helping take care of Sadio Mane who is the second most fouled player in the league this term after Jack Grealish. At 11/2 Reid is currently top-priced with betfair to be carded and hopefully can bring home some pre-Christmas bacon.

That’s 42/1 on the Same Game Multi at the time of writing. Let’s hope for an entertaining game and with the festive season around the corner, please do make sure to gamble responsibly.

A very memorable @DanielSturridge hat-trick against this weekend's opponents 🔥🕺 https://t.co/39btOUnMtU