Fulham vs Sheffield United Odds: Mitrovic to be in the goals again

The second tier's 23nd gameweek concludes in the capital as Fulham welcome Sheffield United to Craven Cottage on Monday evening.

Despite drawing all of their last four games, the hosts still sit at the top of the tree, two points clear of Bournemouth and three of third placed Blackburn, though Rovers have caught up with the front two.

Marco Silva should shuffle his deck here, which will see Antony Robinson return at left back and Fabio Carvalho retain his slot in the ten after the teenager was named on the bench for the trip to Luton.

The visitors look revitalised under the tutelage of their new supremo Paul Heckingbottom following back-to-back wins. Surprisingly though, despite their financial clout, the Blades had struggled for consistency under Heckingbottom’s predecessor but victory here would see them go five games unbeaten and will hoist them to within three points of the play-offs.

Having kept three clean sheets in his last four games, Wes Foderingham would have kept his spot in goal regardless of Robin Olsen’s fitness. No doubt, Heckingbottom will persist with the 3-4-2-1 that he has deployed the last two games, Sander Berge may be the only change at the expense of Conor Hourihane although this is unlikely with the January transfer window around the corner.

SUFC pre and post Slaviša Jokanović’s sacking have been two different entities. Whilst the Blades did show flashes of something under the Serbian, consistency was nonexistent, as was a run of results.

Heckingbottom has reverted back to a system that suits this current squad of players and their attacking fluidity is clear to see. This is best illustrated by the fact that his side have scored five goals in their last two games and been good value to do so as they have generated an xG of 4.39.

Defensively, they do not look the finished article though. In their most recent match, Cardiff scored twice, one of which came despite the fact they had a man less, Bristol generated half a goal of xG and in the last game of the Jokanovic era, Reading missed a ‘big chance’.

The hosts often bring goals to the party as well. In fact, despite playing a game less then most sides, they have scored the most goals in the division by some distance (51), almost twice as many as their opposition on Monday. Although they have drawn their last four games, they are more than capable of dishing out a spanking as they have put seven past Blackburn, four past Forest and QPR and three past West Brom.

All things considered I think this goalline is worth taking on at the prices posted, I would advise staking two points.

As far as Championship referees go, James Linington is up there with the best and he has got the whistle on Monday. In the nine games he has overseen second tier games this season and brandished 45 cards, that is an average of five per game!

I think Jayden Bogle’s price is worth a punt at the price available. With 18 cards in just over 100 appearances, Bogle has a cards per 90 average of just under 0.20. Based on that average, this does mean his price for a booking is a touch short but given the referee and the magnitude of this fixture, I think it is worth taking on.

It is also worth noting that he will be up against Neeskens Kebano. He has being fouled 1.3 times per game this season.

Mitrovic has a goals per 90 average of 0.35 at Championship level and that is from a sample size of 84, therefore, technically any price of over 1.35 would represent value here for him to score.

He is in fine form in front of goal, but the frontman is also more than capable of boiling over. When Steve McClaren signed him for Newcastle he said that he had ‘a bit of the devil in him’ and with 58Y and 5R cards to his name this has certainly proved to be the case. I think the price of combining a goal with a card is worth a punt. I will be having 0.75pts on it. 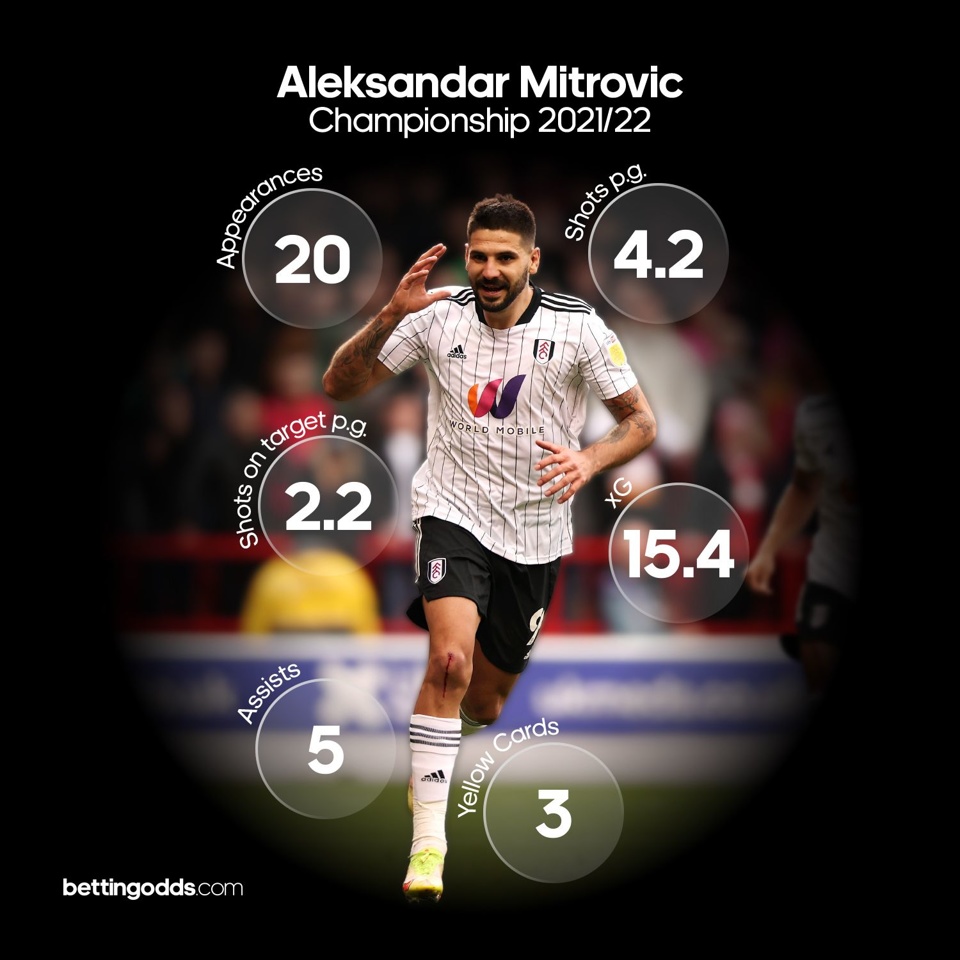