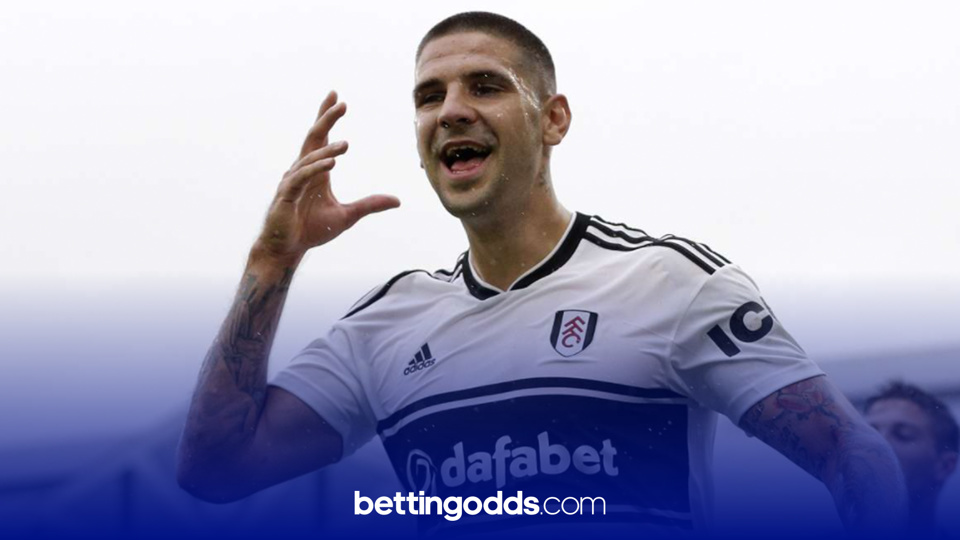 Aleksandar Mitrovic's Fulham were unlucky not to take three points at Sheffield United last week and feature in our both teams to score tips on Saturday
By Anthony Eadson
16:51 Thursday 22nd October 2020 - 5 minute read

There’s a full card of EFL fixtures on Saturday with four games in the Premier League. There are 36 matches kicking off at 3pm and I’ve picked out six which I like the look of for both teams to score as part of my football tips for BettingOdds.com this week.

As an accumulator the selections pay 33/1, but I’ll be using bet365 meaning if the bet lands we get an extra 15% on our winnings with their soccer accumulator bonus. This takes us to around the 38/1 mark which is currently the best price available.

Both teams to score accumulator
Both teams to score in all of the six games below
33/1
See below why we are backing both side to find the back of the net in these six fixtures
Odds correct as of 2020-10-22 16:10 Odds subject to change.

The first game I’ve opted for both teams to find the back of the net is the only 3pm kick-off in the Premier League, Fulham v Crystal Palace. The agonising wait for their first league win of the season now sits at five games for Fulham and Scott Parker. The Cottagers came within minutes of three points against Sheffield United last weekend only to be denied by a Billy Sharp penalty. They racked up fifteen shots on goal in that game and new signing Ruben Loftus-Cheek provided an extra creative element in the final third.

Crystal Palace have already won on the road at Manchester United this season and will fancy their chances against the side who currently sit bottom of the league. Wilfried Zaha has four goals in his first five games of the season and with Fulham conceding 12 league goals already I think this will be an entertaining affair.

Dropping down into the Championship and the only game I’ve selected from this division is Reading v Rotherham. The Royals have stormed to the top of the table after six games with an impressive 16 points. They’ve won all three of their home fixtures so far and I think that run will continue on Saturday.

However, I do think Rotherham can get on the scoresheet, despite failing to win in their last five league games, they have scored in their last four. Three of those games came with a 1-1 scoreline and they have found the back of the net on the road in all three of their away league games in the 2020/21 campaign.

Moving down into League One and the first of two games I’ve selected here is Blackpool v MK Dons at Bloomfield Road. It’s way too early to be calling any game a ‘six-pointer’ but here we have two sides who sit in the relegation zone who will be desperate for the win.

Blackpool have scored in three of their four home league games this season, including against second-placed Ipswich. The visitors have scored in all of their last four league games, scoring two goals in both their most recent matches. This game looks wide open and with two leaky defences on show, goals should be on the menu.

I’m staying in Lancashire for the next selection with Accrington Stanley v Bristol Rovers at the Crown Ground. Both sides have enjoyed a respectable start to the new term and have both taken three wins from their last four league games.

When we look at the previous fixtures for the two teams we can see that both teams to score has landed on four out of of seven occasions (57%) for both Accrington and Bristol Rovers. Only Doncaster, MK Dons and Burton have a higher both teams to score percentage so far this season and I’m fancying them to both find the net on Saturday afternoon.

It’s down into League Two for the penultimate fixture in this accumulator with Barrow hosting Walsall up in Cumbria. No side in the division holds a better both teams to score percentage than Walsall and Barrow this season.

Both sides have seen this occur in five of seven matches so far in the 2020/21 league season (71%). David Dunn is yet to record his first league win as Barrow manager but his side remain unbeaten at home this season and have scored in all four of those. They most recently played out a 3-3 thriller with Bolton on Tuesday and both teams to score looks a generous price here at 5/6.

Rounding off this 33/1 BTTS accumulator is Bradford v Newport County. Michael Flynn’s Newport travel to Yorkshire sitting second in the league after an excellent start to the campaign, losing just one of their first seven fixtures. They have scored in all seven of their league games this season and I don’t see that run stopping against a Bradford side who have been far from convincing at the back.

Bradford have, however, scored at least two goals in three of their last five matches. They have played a game less than everyone else in the league and 57% of their opponents’ games have seen both teams find the back of the net.

As I mentioned earlier with bet365’s soccer accumulator bonus, this bet will pay around 38/1 instead of 33/1 thanks to their 15% extra on winnings they provide if a bet lands. Best of luck to those following, please gamble responsibly.

Wilfried Zaha has now scored more top-flight Palace goals than any player in the club's history.