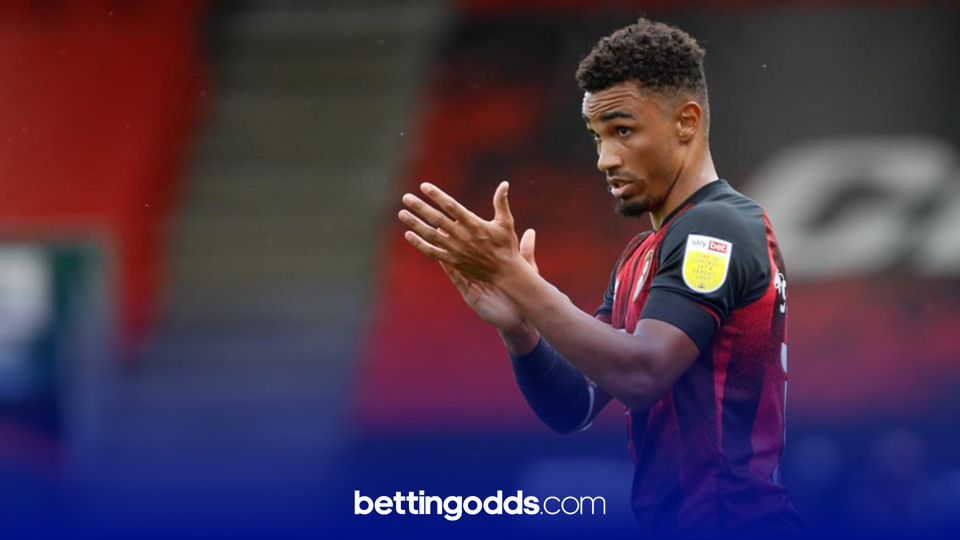 Junior Stanislas has scored nine goals in 22 appearances for this season and his Bournemouth team feature in our both teams to score tips this weekend
By Anthony Eadson
17:07 Friday 19th February 2021 - 4 minute read

Our both teams to score 4-fold was crippled by the weather last Saturday with two games being called off. The two matches that did go ahead, Sunderland v Doncaster and Cardiff v Coventry saw all four teams find the back of the net so well done to those who kept the faith.

This weekend we're back with another 4-fold both teams to score accumulator that currently pays 8/1 with bet365. It’s worth noting that this will rise to 9/1 should all eight teams score, thanks to bet365’s soccer accumulator bonus, which in our case is 10%. We’ve a full range of football tips that can be found on BettingOdds.com this weekend including match previews for the Merseyside derby and Arsenal v Manchester City.

All four games involved this weekend kick off at 3pm Saturday with the first of those coming from Loftus Road, where QPR take on Bournemouth. At the time of writing, Jonathan Woodgate is still Bournemouth’s interim manager, however odds are currently shortening on Thierry Henry becoming the new man in their dugout. On the pitch, The Cherries have improved under Woodgate and knocked Burnley out of the FA Cup. Only Reading and Brentford have scored more goals in the league this term than Bournemouth and with BTTS landing in 57% of their away fixtures, I’m happy to include them this weekend.

Queens Park Rangers have also been in good form of late and have in fact won five of their last six league games. Rangers are still 16th in the table and find themselves 13 points behind 6th place Bournemouth. With wins over Brentford, Blackburn and Watford in their last three, Mark Warburton has really been getting a tune out of his players and this will be a stern test for the visitors. 50% of their fixtures this season have seen both teams score and with two sides who believe they can take three points, I think we should be in for a good game

Dropping down into League One and the first of two fixtures from this division that I’ve focused my attention on is Burton v Sunderland. The Brewers still find themselves rooted to the bottom of the table although they have pulled out some huge results in recent weeks, with a 1-0 victory over Hull the highlight in their second spell under Jimmy Floyd Hasselbaink. No team in League One has a higher BTTS record than Burton who have seen it land in an impressive 19 of their 26 games.

Sunderland are the visitors to the Pirelli Stadium on Saturday and they will be hoping for more of the same after Aiden McGeady set up four goals for Charlie Wyke in the 4-1 win over Doncaster last weekend. Astonishingly all those four goals were headers and Sunderland have more than enough quality to cause Burton real issues on Saturday. With the home side in good form and Sunderland desperate to get back into the play-off spots I’m leaning towards both teams finding the net.

Rochdale take on Plymouth in the foothills of the south pennines on Saturday and since the start of December the home side have played 15 league games that have seen a remarkable 63 goals scored. That’s an average of 4.2 goals per game over their last 15, for which fans have certainly had their money's worth. Only three teams have seen a higher percentage of their home games include BTTS this season than Rochdale. They have scored 10 in their last five matches at Spotland and I fancy them to find the net on Saturday.

Plymouth make the long journey up to the North-West and they are currently on a run of eight league games unbeaten, winning five of those. 54% of The Pilgrims away games in League One this season have seen both teams score and I’m backing to get on the scoresheet against the worst defence in the league in Rochdale.

The final game in this 4-fold comes from Birkenhead where Tranmere take on Oldham. I actually fancy Tranmere to push for promotion in the final third of the season. Rovers have won five of their last six league games and will be disappointed with their midweek defeat to Stevenage. I see the home side winning this one but there is plenty of reason to believe that Oldham will get on the scoresheet considering 69% of their away league matches have featured both teams scoring.

That’s 9/1 for the four matches including the bet365 soccer accumulator bonus. Best of luck to those following, let’s hope for a 100% record like last week. Please always gamble responsibly.