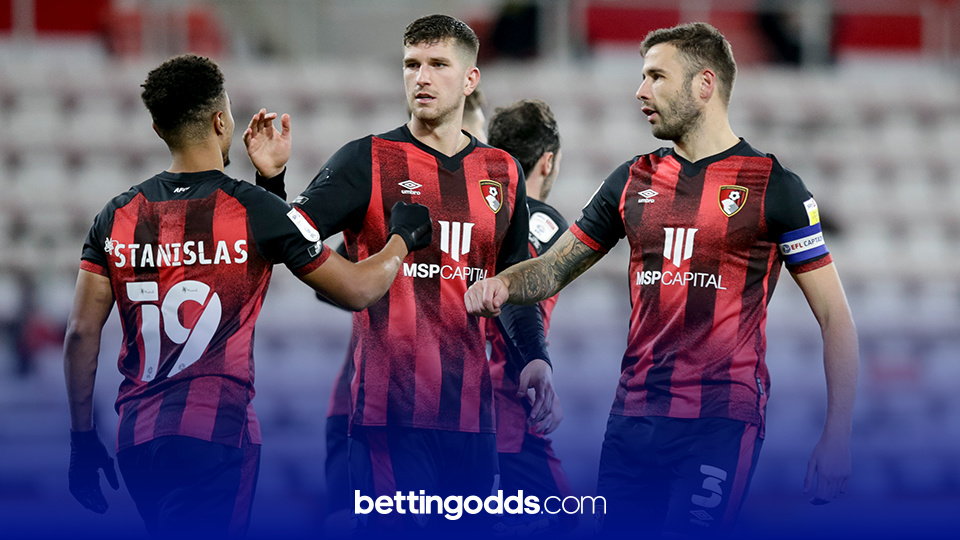 Bournemouth sit second in the Championship table and feature in our both teams to score tips
By Anthony Eadson
00:58 Friday 18th December 2020 - 4 minute read

Last Saturday’s both teams to score acca was let down by one solitary goal with Preston failing to get on the scoresheet in a 3-0 defeat to Luton. We have a range of football tips today on BettingOdds.com and @AnthonyEadson is back with four more plays for the Football League action this weekend that pays just over 9/1 as an accumulator with bet365. This includes a 10% bonus on winning four-folds thanks to their soccer accumulator bonus offer which you can read more about here.

Kenilworth Road is the destination of choice for the first of my both teams to score plays coming at 3pm on Saturday. Luton take on Bournemouth with the Cherries currently second in the Championship, three points behind league leaders Norwich. On the road this season Bournemouth have seen both teams to score land in six of nine games, which includes goals conceded at Coventry, Rotherham and Birmingham.

There’s plenty of reason to believe that Luton can also find the back of the net. The Hatters are currently 13th in the table, just six points off the play-off spots. Luton have produced two fantastic performances in their most recent home games with a 3-1 win over Norwich, before a 3-0 victory against Preston last weekend. They have enjoyed a solid season so far in Nathan Jones’ second spell at the club and I fancy both teams to score in their game with Bournemouth.

Followers of my weekly both teams to score selections this season will know that Burton Albion have featured regularly. The Brewers currently have the best both teams percentage in England’s top four divisions with both teams getting on the scoresheet in 83% of their fixtures. That’s 15 of 18 games in total and with Burton facing Doncaster at home this weekend I think that figure could rise again.

Doncaster are flying high in sixth place and after four wins in their last five, they will fancy their chances against Burton who sit bottom. Doncaster’s only defeat in their last five came against Hull who sit top, although Darren Moore’s side did still manage to score against one of the best defences in the league in a game which resulted in a 2-1 loss. It’s 12 league games since Rovers failed to find the back of the net I expect them to get a couple on Saturday.

There’s a Lancashire derby from the Wham Stadium in League One this weekend with Accrington Stanley entertaining Blackpool. John Coleman’s Stanley have made a good start to the season and find themselves eighth in the table with as many as three games in hand on some of the sides above them. Stanley have lost just one of their seven league games on home soil in this campaign and after a 2-0 win away at Gillingham midweek they will be looking to move into the play-off spots with three points here.

Blackpool pulled out arguably their best result of the season on Tuesday as the Seasiders put three goals past league leaders Hull in a fantastic 3-2 win. That victory made it six wins in the last eight league games for Neil Critchley’s men, with their only defeat in that period being a 3-2 defeat on the road at Doncaster. I think we should get a good game between these two teams and like the look of BTTS to land in Lancashire.

The final game I've focussed my attention on this Saturday is from League Two where Morecambe make the long trip down to Colchester. No side in the division has seen both teams to score land more times this season than Colchester. 14 of their 18 league fixtures have seen both sides score and with the U’s not failing to score since September 12th it’s hard to back against them doing so on Saturday.

Morecambe sit just one place behind Colchester in eighth place in the table going into this game. Derek Adams’ side have exceeded the expectations of many this season and have won three of their last four in the league. 78% of Morecambe’s away games have featured BTTS this season and I can’t keep away from including this game in the four-fold at 8/11.

As mentioned above the accumulator currently pays best with bet365, who provide a 10% bonus on winnings should all eight teams find the back of the net. Best of luck to those following, please gamble responsibly.